The dramatic falling out between Uganda's largest telco MTN and the authorities, which culminated in Thursday's arrest and deportation of the company's chief executive, Belgian national Wim Vanhelleputte, may have left President Yoweri Museveni at a crossroads.

The president has to juggle between believing intelligence from his security agents or the pleadings of a multinational backed by the diplomatic power of three countries.

Since the earlier deportation of three senior MTN managers two weeks ago, Uganda has been under pressure from France, Italy, South Africa and Rwanda to substantiate claims that the trio had been engaged in espionage as alleged by security agencies.

French national and MTN Uganda's chief marketing officer Olivier Prentout, Rwandan Annie Bilenge Tabura, who was head of sales and distribution, and Franco-Italian citizen and general manager for mobile financial services Elsa Muzzolini were also accused of waging a campaign to sabotage the collection of new taxes introduced last June on mobile money transactions and social media sites, known as the Over The Top (OTT) tax.

The EastAfrican has learnt that just before he set off for the African Union's Heads of State Summit in Addis Ababa last week, President Museveni held a meeting with French ambassador Stéphanie Rivoal to discuss the deportations.

In that meeting, President Museveni is reported to have said that the campaign in which members of MTN's executive committee discussed strategies to lobby against the tax could be forgiven. He, however, deferred a decision on the trio's alleged spying on government officials for Rwanda.

No official reason has been given for declaring Mr Vanhelleputte a "prohibited immigrant."

Mr Vanhelleputte's deportation order, signed by Interior Minister General Jeje Odongo, did not state any reasons for the action.

Sources at MTN however told The EastAfrican that Mr Vanhelleputte had told his colleagues at MTN Uganda that he was being deported for "speaking to people who had been deported" from Uganda. That is what the security officials had told him.

MTN Uganda chairman Charles Mbire said he did not know what had happened.

"I have nothing to say about these developments because I don't know what is happening. Let's wait for security to appraise us on the reasons for the deportations."

Mr Vanhelleputte's deportation came two days after he had sacked MTN's manager for legal and corporate services, Anthony Katamba, after a stormy encounter in which Mr Katamba reportedly threatened his boss with deportation.

Indeed, in his brief to management on the incident, Mr Vanhelleputte, who joined MTN Uganda in 2016, said Mr Katamba had threatened him with deportation.

It has also emerged that Mr Vanhelleputte was to have been deported alongside the other three employees in January, but had escaped because of a last-minute change in plan that saw him skip a meeting in Rwanda.

When security agents arrested Mr Prentout and Ms Muzzolini on January 19, they spent a while looking for two other people who had supposedly slipped through. Those two turned out to be Mr Vanhelleputte, who had not left Uganda, and Ms Tabura, who was cleared at the Immigration desk because she had her work permit stamped in her passport.

The sacking of Mr Katamba, who had worked with MTN for close to 18 years, followed a period of tension between him and other employees who accused him of intimidation and high-handedness.

According to court documents, in 2015, Mr Katamba was accused of working with state security agents to force confessions from other employees, including using threats and torture.

Last week, a whistleblower brought these issues to management and even attached excerpts from the proceedings of Criminal Case 123 of 2012, in which Justice Lawrence Gidudu refused to admit as evidence a confession by Patrick Ssentongo, a former MTN employee who was charged with defrauding the company.

In his testimony before the court, Mr Ssentongo claimed that Mr Katamba had personally instructed a senior police officer, Nixon Agasirwe, to force a confession out of him. Mr Agasirwe is currently in detention, facing charges of illegal arrest and deportation of Rwandan refugees. He case is before the military court martial.

MTN management is said to have considered Mr Katamba's actions as constituting aggravated indiscipline and decided to sack him. In the termination letter, however, MTN cites recent standoffs with the regulator and the numerous court cases that the company has been involved in as evidence that Mr Katamba had failed in his role as the company's internal legal advisor.

Mr Vanhelleputte reportedly told Mr Katamba that management had lost trust in his ability to provide the company with leadership on his legal brief.

Mr Katamba reportedly refused to accept the termination letter and instead stated that Mr Vanhelleputte would be deported like the others.

In communications after she had been deported, Ms Muzzolini said that during her interrogation, security agents had shown her screenshots of a WhatsApp group discussion in which Mr Katamba and the three deported officers discussed strategies for dropping the new industry taxes. Ms Muzzolini revealed that while Mr Katamba was party to that discussion, his part of the conversation was missing from the exhibits.

It remains to be seen how the travails of MTN will affect the investment environment in the country. 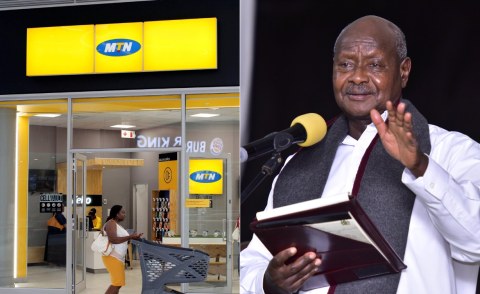 Deported MTN Boss Returns to Uganda After Presidential Pardon
Tagged:
Copyright © 2019 The East African. All rights reserved. Distributed by AllAfrica Global Media (allAfrica.com). To contact the copyright holder directly for corrections — or for permission to republish or make other authorized use of this material, click here.