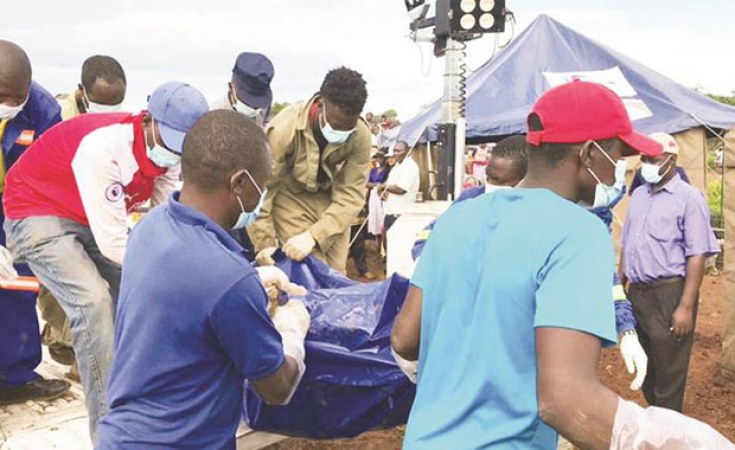 Battlefields — FIVE dead bodies of artisanal miners were Saturday retrieved from a disused mine shaft in Kadoma after they were trapped inside shafts Tuesday by floods.

Twenty more are still underground and awaiting lifting to the surface.

Officials from government's Civil Protection Unit (CPU) Saturday combined forces with artisanal miners and mining firms in the area to draw water from flooded mine shafts at Silvermoon Mine in the Mashonaland West area.

Earlier during the day, there were ecstatic scenes from relatives and villagers who witnessed eight miners pulled alive from the pits.

However, the mood changed later in the day when bodies of the deceased started emerging from the shafts.

Police ferried the bodies to a nearby tent which had been pitched for the operation.

Dog handlers were summoned to try and control relatives, villagers and some artisanal miners who scrambled to view bodies that were being put in the tent.

Some 10 artisanal miners who were not part of the doomed lot when disaster struck Tuesday volunteered to go underground to retrieve bodies of their colleagues.

They wrapped them in body bags before hoisting them to the surface using a rope.

The muddied bodies have been underground since Tuesday night.

No bodies or any survivors had been retrieved yet from the interlinked Cricket Mine shafts which were also waterlogged.

Government on Friday put the number of those who entered the shafts at 70, a revision from earlier state media reports of 23 trapped in the tunnels.

Government and mining firms, Zimplats and RioZim have supplied equipment, food and beer for the rescue team.

Relatives who have spent the better part of the week camped in the area were also being fed, with Local Government Minister July Moyo saying Friday that up to US$200 000 could be required to complete the entire operation of retrieving bodies, feeding family members and transporting the deceased to their different burial areas in the country.

Joseph Chitiki, father to Cosmas and also a brother to Xavier, both of whom were still missing Saturday, said although he was clutching onto diminishing hope of finding his loved ones alive, he was still not happy about the CPU's haphazard approach to dealing with the emergency.

"We cannot tolerate a CPU with no central command; the army is doing as it pleases and so is the police," he said.

"They are disorganised and this is hampering any chances of finding more survivors as we still hope.

"I have been here since Wednesday and the CPU has not been of much help."

Chegutu West MP, Dexter Nduna who was part of the team retrieving the bodies, questioned Zimbabwe's disaster preparedness in cases of similar emergencies.

"Last week, I approached parliament and called on the Minister of Mines to address three issues which include the state of disaster management preparedness; this is not the first time such an occurrence has happened.

"It happened in my constituency in 2015. The disaster management preparedness leaves a lot to be desired," said Nduna.

The Zanu PF legislator also accused government of not doing enough to protect artisanal miners yet they contributed the larger chunk of gold to state owned Fidelity Printers.

Nduna suggested that a fund be set up where at least 30 percent of gold proceeds are retained for development, safety training and capacitation of artisanal miners so as to avert similar disaster.

Dewatering efforts continues into the fifth day on Sunday.