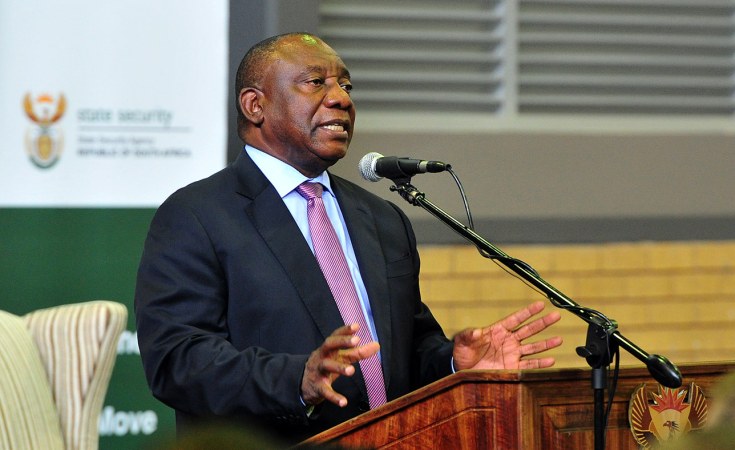 President Cyril Ramaphosa has called on the State Security Agency (SSA) to recommit itself to serving the people of South Africa and adhering to the rule of law in support of the country's trajectory of renewal and growth. President Ramaphosa made this appeal to members and management of the intelligence services during a visit to the SSA in Pretoria today, Friday 15 February 2019.

The visit was part of the President's fulfilment of the commitment he made in the 2018 State of the Nation Address that he would visit all government departments.

The Ministry briefed the President on the challenges affecting the agency that gave rise to President Ramaphosa's appointment in 2018 of a high-level panel to review the intelligence services.

The panel has produced a report that identifies challenges such as low staff morale, unprofessional and unethical conduct, leadership instability, corporate governance weaknesses including procurement violations and difficulties associated with the amalgamation several years ago of domestic and foreign intelligence gathering services.

Addressing SSA staff members, President Ramaphosa said the report would be published in due course for the benefit of all South Africans including members of the national intelligence service.

The report would also be the subject of engagement with the parliamentary Joint Committee on Intelligence and the Inspector-General of Intelligence.

The President said that the agency's recent past was unfortunate and there would be accountability for the wrongs that had occurred within the intelligence services.

President Ramaphosa paid tribute to the "cohort of really good people (within the SSA) who are committed to the country" and said the country valued their work and what they stood for.

He called on intelligence staff to "reposition your own dedication and commitment" and to be ethical, committed, selfless and non-partisan in the execution of their duties.

The President cautioned the intelligence services to desist from involving themselves in party political dynamics. "We want you to do things correctly, in terms of the law and corporate governance, without a deviant agenda."

The President called on the State Security Agency to develop the human capacity and innovation to support South Africa's national objectives.

He said the SSA should become a professional civilian intelligence service of which the country could proud in the knowledge that South Africa is fully secured. The President said the report of the review panel spelt out a way forward towards the rebuilding of an SSA that would be revamped, renewed and recommitted.

Previous Story
State Security Report (The Sum of All Our Fears) and the Future of SA (Happy Beginnings?)
Next Story

State Security Report (The Sum of All Our Fears) and the Future of SA (Happy Beginnings?)

Ramaphosa to Implement Recommendations of Spy Agency Report?
Tagged:
Copyright © 2019 Government of South Africa. All rights reserved. Distributed by AllAfrica Global Media (allAfrica.com). To contact the copyright holder directly for corrections — or for permission to republish or make other authorized use of this material, click here.