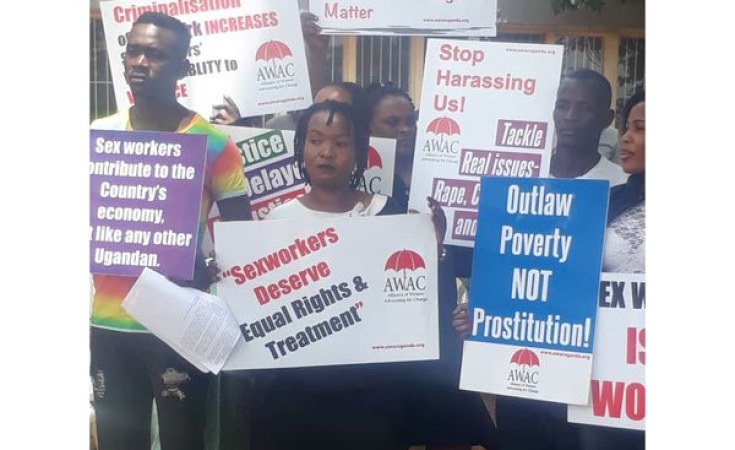 Anthony Wesak/Daily Monitor
Demonstrations. Women and human rights activists display placards calling upon MPs not to criminalise prostitution as they debate and pass the pending Sexual Offences Bill into law in Kampala.
The Monitor (Kampala)
By Anthony Wesaka

Kampala — Human and women rights activists have appealed to Members of Parliament not to criminalise prostitution as they debate and pass the pending Sexual Offences Bill of 2015 into law.

The women rights activists explained that the offence of commercial sex remains one of the most redundant provisions whose enforcement by the law agencies continues to fail as it is hard to gather evidence and come up with a conviction against suspects.

"These arrests are mostly carried out to solicit bribes from sex workers and harass them. Few of them get to trial. The provision, is therefore, unnecessary since it is unenforceable," Ms Macklean Mary Kyomya, the executive director of Alliance of Women Advocating for Change, an NGO, told MPs on Friday in Kampala.

The women activists say the Sexual Offences Bill 2015, seeks to prohibit prostitution under clause 12 just like the Penal Code Act.

While addressing journalists at the Uganda Museum in Kampala, the women activists brandished placards reading; "sex workers deserve equal rights & treatment", "outlaw poverty not prostitution", "sex workers contribute to the country's economy just like any Uganda", "rights not rescue, my body, my business".

Prostitution is the business or practice of engaging in sexual activity in exchange for payment.

Further, the women rights activists lamented that criminalisation of sex work discourages sex workers from accessing the necessary HIV/Aids testing and treatment as they stay in hiding for fear of being arrested and that this has worsened the HIV scourge.

"It is, therefore, safe to say that the continued criminalisation of sex work is doing more harm than good. This provision should be repealed in its totality," the group said.

The other concerns raised by the activists for amendment in the Sexual Offenses Bill included; why the leniency of penalty when it comes to marital sexual assault of one year compared to rape where one is liable to death by hanging or life imprisonment on conviction.

They also say using HIV positive status as an aggravating factor to severely punish rape suspects is discriminative against people living with HIV as this entrenches the stigma.

2016. The Sexual Offenses Bill of 2015, was tabled in Parliament in April 2016 as a Private Member's Bill by MP Monicah Amoding under the umbrella of the Uganda Women's Parliamentary Association.

The objective. The Bill seeks to consolidate and amend the laws related to sexual offenses from various enactments and to provide for procedure and evidential requirements during the trial of sexual offenses in courts of law.

It is about child to child sex and child pornography, part four is about special powers of the court and jurisdiction which includes powers to award compensation and part five provides for miscellaneous provisions which include provision for extra territorial jurisdiction, regulations and saving of laws. 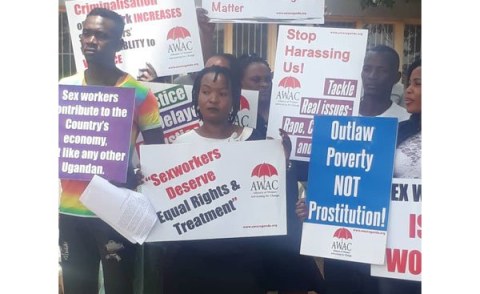 Uganda Govt Urged to Decriminalise Sex Work
Tagged:
Copyright © 2019 The Monitor. All rights reserved. Distributed by AllAfrica Global Media (allAfrica.com). To contact the copyright holder directly for corrections — or for permission to republish or make other authorized use of this material, click here.