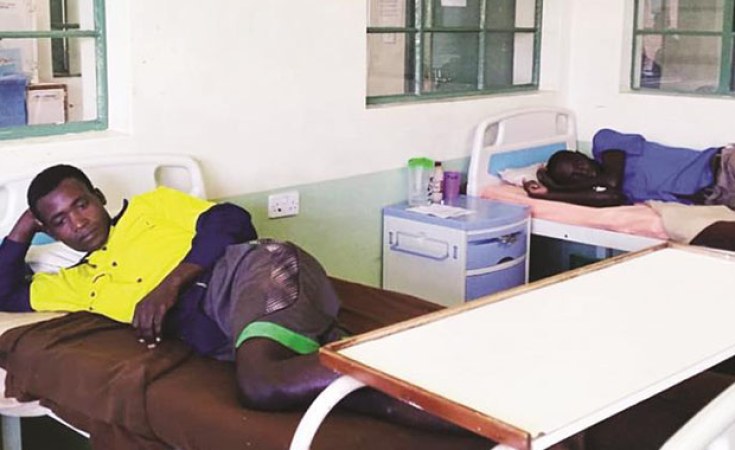 Kadoma — Saturday February 18, 2019 will forever be etched in the minds of eight artisanal minors who survived a four-day ordeal in flooded shafts at Cricket No 3, Battlefields in Kadoma.

For the eight -- Takudzwa Kabaya (20), Thinkmore Madimutsa (23), Simon Mushonga (26), Lovemore Katsirange (43), Tinashe Ndaruza (20), Ronald Save (21), Silent Napulu (33) and Washington Chaku -- the day was memorable after they were hauled to the surface by rescue teams to be reunited with friends and relatives who had been camped at the site since Wednesday waiting anxiously for news of their loved ones.

In separate interviews at the weekend after regaining their freedom and being rescued from the jaws of death, the eight recounted how they survived their four-day ordeal without food and clean water and how it reaffirmed their faith in the almighty.

Ndaruza said the four days were harrowing as they waited to be rescued.

"It was a terrible experience as we spent three days without eating. We survived on water during those days," he said.

"Hope of making it alive was slowly fading as the days progressed. l did not stop praying during this time day and night asking God to help me make it out alive," he said.

Ndaruza said they had to step on dead bodies and there was a possibility of a high number of miners still underground.

"As we tried to escape the disaster, we stepped on at least 10 bodies. The possibility of others coming out alive from our shaft are now very slim. However, it is possible that they could have found somewhere to hide like we did," he said. Another survivor, Silent Napulu said tragedy struck as they were about to get out of the pit.

"We had finished our mining activities and on our way out we were pushed backwards by water and luckily we managed to climb on a rock where the water level was low. That is where we were perched for the past four days," he said.

Another survivor, Chaku shocked authorities and onlookers as he emerged from the shaft with a 10kg sack of gold ore which he refused to surrender and carried to the hospital.

One of the rescuers, Mr Shepherd Save said they heard voices of people shouting as they were pumping out water from the pits.

"We heard people shouting and we opened another channel and a team of six went underground to rescue them. We expected to find only one person alive and not such a high number," he said.

Mr Save said six of his relatives were trapped and two of them survived. He said de-watering should continue as there were chances of finding other people alive.

Those who survived were reported to have sought refuge in an area once drilled by RioZim as it was looking for samples during exploration.

The holes let in air which allowed them to breathe.

While the recovery of the eight brought relief and joy to their friends and relatives, for other relatives it remains a long and painful waiting period for news of their relatives that were still unaccounted for.

One of these was Mrs Eunika Zvitiki whose son and grandson were still trapped at Cricket No 3 Mine together with two others.

Mrs Zvikiti, who spoke to The Herald with tears rolling down her cheeks, said she was afraid that the two might not come out alive.

"I know people are saying there is hope that my son Xavier (43) and grandson Cosmary (35) would be found alive but from what I am seeing and the level of water I saw, there is little chance of that happening. I am preparing for the worst," she said.

"These two were working in South Africa trying to eke out a living only to return here last November to die."