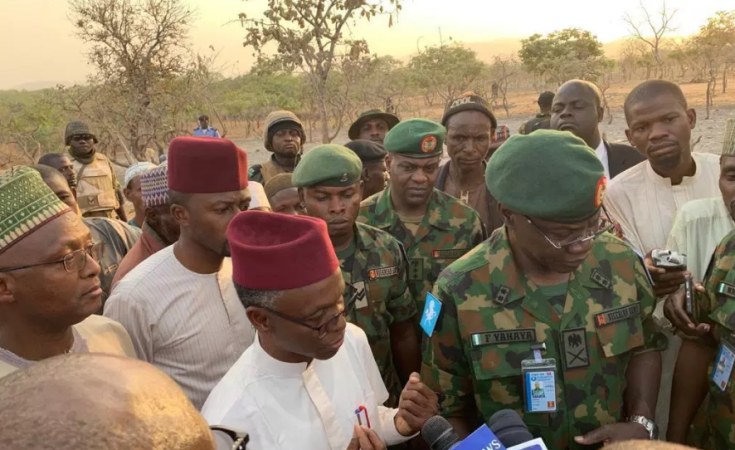 The Kaduna State governor, Nasir El-Rufai, has alleged a plan to wipe out some communities in the state.

Mr El- Rufai made the allegation on Tuesday while briefing State House correspondents after an expanded meeting called by President Muhammadu Buhari.

The governor, who was reacting to recent attacks in some communities in Kajuru local government, said the death toll has risen to 130, up from the 66 he earlier announced last week.

The governor said based on the security briefing he received on Monday, some arrests have been made and some of those arrested will be arraigned in court.

"The arrests continue because the more the police dig into this matter, the more it is clear that there was a deliberate plan to wipe out certain communities.

"It is not accidental, it is not spontaneous, it is a plan, it is akin to genocide and the more the police dig into the matter, more arrest will be made. And the suspects are being prosecuted," he said.

On whether there is a political undertone to the killings which are coming a few days to the general elections, Mr El- Rufai said he would not speculate.

He said as the chief security officer of the state, "a crime is a crime. The motive, the undertone doesn't border me. There may be, there may be not.

"So, we are not looking at undertones, people can attribute political motives to it. But as a government, we have no such doctrine. We have to just prosecute everyone on equal opportunity basis."

On the allegations that no killings took place in the state and that he merely fabricated the news, the Kaduna governor said "I think that anybody that is still questioning whether these attacks took place or not is being grossly irresponsible.

"I think as the governor of the state, and everyone knows me and my records of public service. I would not be irresponsible enough to stand before the media and say something has happened that has not happened. I don't work based on telephone calls or rumours.

"We have every security agency in Kaduna state and they send me briefings including the DSS. I work only on that basis.

"So, people are being grossly irresponsible, I don't know what their agenda is. But I know there is a prevailing narrative in the Nigerian media that only certain lives are more important than others.

"We see that clearly in the slant of reporting and the denial. The fact that you are still asking me these questions two days after we have proved beyond all doubts that all those people claiming that this didn't happen, they first said I lied, that it didn't happen, then they started saying, no, the numbers are not what they are.

"And now, what we are hearing, in the last report we got is that, over 130 people were killed not even 66. And the Fulani leaders are providing the names of all these people, we have the list and we will release it to the press," he said.

The governor said he also has pictures of the people killed and how the army had to be there to help bury them two days after they were killed because the bodies were decomposing.

" But some people are being irresponsible, they are pretending this has not happened because it does not fit their ethnic or partisan narrative. It is totally irresponsible because this can happen to anyone of us.

"And the day we stop sanctifying human lives, the day we begin to think that one life is more important for headlines than another, this country is finished, because, every human being has equal capacity for good and evil. And part of the reason why I went out and was appealing for calm is because I know that those that lost their relations can take the law into their own hands unless they see that the government is doing something," he said

Mr El-Rufai said the police commissioner in Kaduna state, Ahmad Abdulrahman, is rushing to court to arraign the suspects arrested so as to send a message that those who carried out the attack are being prosecuted and to pass the message to people not to take the laws into their own hands.

"Everyone is capable of retaliation, it is not a matter of pride, in a civilised society, for you to say I can retaliate or I am retaliating or this is a reprisal attack.

"I am surprised that some people, even people mention that with pride, that these people were killed so, we did the reprisal attacks and they are still walking the streets.

"We are going to go after them. All these people will face the laws of Kaduna State, I promise you. So, stop saying that people were not killed because it upsets those who lost relations and their livelihood. Let's face the fact and tell each other the truth," he said.

Renewed Conflict in Nigeria's Kaduna State Leaves Dozens Dead
Tagged:
Copyright © 2019 Premium Times. All rights reserved. Distributed by AllAfrica Global Media (allAfrica.com). To contact the copyright holder directly for corrections — or for permission to republish or make other authorized use of this material, click here.