Nigeria: Postponed Polls - We Were Treated As Slaves - NYSC Members 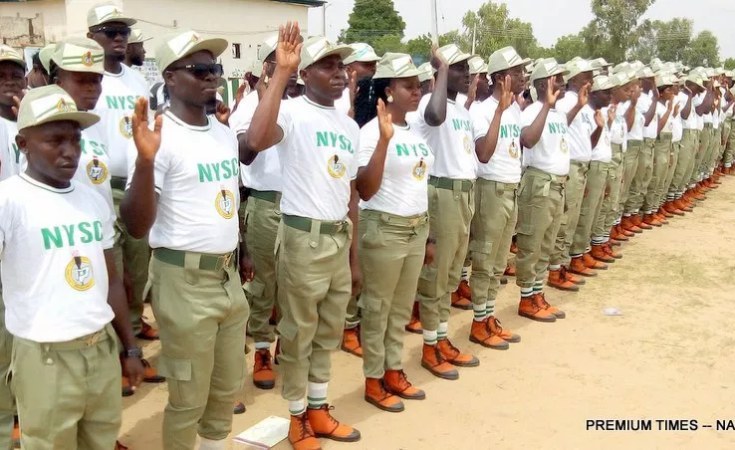 Abuja — MEMBERS of the National Youth Service Corps (NYSC) across the nation on Monday decried the neglect and irregularities that dogged their welfare during last Saturday's aborted general elections, accusing the Federal Government and the Independent National Electoral Commission, INEC, of treating them as slaves.

In separate interviews with Vanguard, the corps members said they had reported at the local government offices of INEC by 5pm last Friday and were deployed to various Registration Area Centres (RACs), where they took stock of the sensitive materials available for the polls and also got hint of a possible postponement of the polls by 11pm the same night but were directed to await final confirmation at 3am on Saturday.

According to the corps members, though adequate security arrangements were made for them at the RACs, they were left to sort out their welfare matters individually as no INEC official gave them any welfare package or spoke about it all through the period they awaited the confirmation of the election shift.

They maintained that food was not made available for them to eat; no beds were brought in for their rest and recuperation; and no restrooms and toiletries were provided for them to use to freshen up before heading to their respective polling units from the RACs had the election held on February 16, as earlier planned.

Consequently, they said, most of them including the nursing mothers and the pregnant corps members mobilised for the national duty slept in broken down vehicles, under trees, on trees, in classrooms and in open fields under harsh weather conditions amidst other risks.

Grace, (surname withheld) a corps member in Lagos, said in a telephone interview with our correspondent that she slept on bare floor.

"We didn't even find a place to bath or eat. Mosquitoes had a feast on us. Regular secondary school students can't sleep in their own classrooms but we were let down by the nation.

"We are graduates for God's sake. We know what we came out for when we answered the clarion call but we were treated as slaves in return for our patriotism. It was a bad experience for most of us."

She went further to allege the substitution and replacement of names of some corps members with those of non-corps members by officials at the Commission's local government offices which resulted in irregularities in the allowances they were paid last Sunday.

"INEC published a list but the local government (officials) came up with a fresh list that differed from the initial list," Grace said, adding that some corps members were affected because their names were missing on the fresh list.

She said while those corps members were subsequently denied their transport/training allowance of N4,500, others who were not NYSC members had their names featured on the list brandished by the local government officials at Eti-Osa III.

In Abuja, a corps members who agreed to speak on condition of anonymity, lamented a similar poor treatment meted on them by INEC but added that were it not for the timely intervention of the FCT NYSC state coordinator, Mr. Bello Balama, they would have deliberately disobeyed the Scheme's regulations by staging a mass protest against the zero welfare system put in place for them.

He said: "Some of us slept in classroom halls while others slept under the trees at GSS Nyanya where (the RAC) I was deployed to.

"There was a planned protest against the treatment meted on us before we got an SMS message from the state coordinator that we shouldn't be provoked to anger. He assured us that everything would be taken care of.

"Shortly after the SMS came, we started receiving bank alerts of N2,800 as feeding allowance. Right now, we are back to our places of primary assignments awaiting next steps from with regards to the elections."

However, Vee, a corps member in Osun told Vanguard on phone that he had neither received the N4,500 transport allowance nor the N2,800 feeding money his counterparts in Lagos and Abuja received.

While he admitted security presence at the RACs where they had taken stock of the sensitive materials dispatched for the elections, Ifezue said they were given sleeping mats and nothing else by INEC officials in the state.

He expressed deep pessimism with regards to any improvement in their welfare as they look forward to the February 23 and March 9 elections, saying "We were made to feel the Federal Government cares next-to-nothing about us. I am seeing myself going through the same rigorous process of sleeping under the tree next week."

However, an official at the headquarters in Abuja who didn't want to be named because the Director-General, Maj. Gen SZ Kazaure, has not authorised her to speak to the press on the matter, told Vanguard that the Scheme's direct responsibilities over the corps members during elections ended with their mobilisation as requested by INEC.

"The issues of training, security and welfare during the election duties lie squarely with the electoral umpire," she stressed.

Meanwhile, INEC has insisted it made provisions of buckets, generating sets and mattresses at the RACs nationwide as part of measures put in place to meet the welfare needs of corps members before their deployment to various poling units by 5am on Saturday.

The Commission however said corps members who faced welfare challenges did so because the Resident Electoral Commissioners (RECs) in the states were unsure if the elections would take place as earlier scheduled.

INEC said the RECs were expecting the 'Go Ahead' signals from the commission's headquarters before releasing the welfare materials procured for use to the NYSC members mobilised for the elections.

It said though the provisions were minimal, the corps members who received various welfare packages in their states were happy and contented with the materials they were given by electoral body.

On the photographs of corps members in unsavoury conditions circulating on social media, INEC said the images were taken at the premises of its local government offices were adequate security arrangements were not implemented and not at the RACs as claimed by the NYSC members.

Rotimi Oyekanmi, the Chief Press Secretary to the INEC Chairman, Prof. Yakubu Mahmood, said: "We made adequate arrangements. It's unfortunate that we found out that some corps members slept in the open.

"We made provisions for mattresses, mats, pillows, and toiletries. In some of the areas, probably, those materials weren't mobilised in good time to get to the corps members. There may be other issues which we don't know yet.

"But, we are on top of the situation because when we started hearing these (negative) reports, we contacted our state offices and the issues are been addressed at the moment.

Millions of Nigerians Casting Votes for President & Assembly
Tagged:
Copyright © 2019 Vanguard. All rights reserved. Distributed by AllAfrica Global Media (allAfrica.com). To contact the copyright holder directly for corrections — or for permission to republish or make other authorized use of this material, click here.