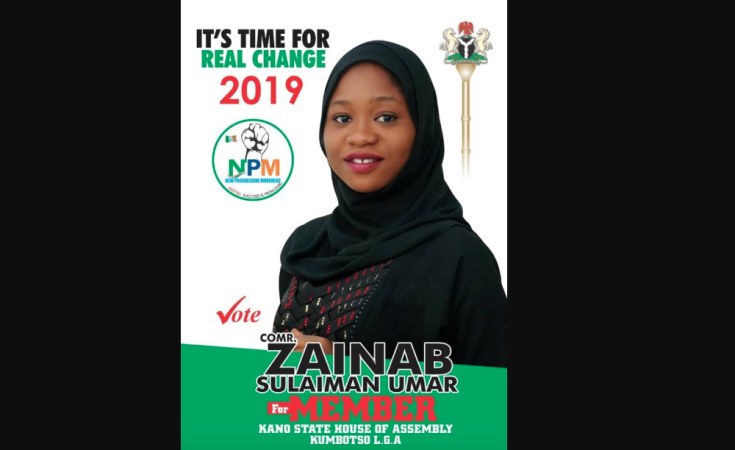 For Umar, who studied communication and finds herself in her first political race, shifting attitudes mean female politicians need confidence to break through. It also means using what some may see as flaws to her advantage.

Umar described an interactive approach to her campaign. Rather than speak to voters from afar, she connects with them on a personal level. "I do my campaign differently from the way others do their campaigns," she said.

She says she can do things that men and older candidates can't, like knock on people's doors and be welcomed in for a face-to-face talk.

Umar's approach seems to be resonating, particularly with youth and women, who, she feels, can see themselves in her efforts. Men, too, want to see politicians like Umar succeed.

"There is a saying, 'What a man can do, a woman can do it better.' The government needs to support women to participate in politics," said Haruna Yusuf of Daura, the hometown of incumbent President Muhammadu Buhari.

Even as attitudes shift and more women run for office this election cycle, resistance to female politicians remains strong.

Umar hears putdowns like "she's not married" and "she's too young."

The key, she added, is to respond to naysayers with positive answers.

But systematic changes are also needed. Political parties must do a lot more to bolster women in their ranks, Umar said.

Umar welcomes more young, female politicians. But she urges them to run for office with a purpose, not to make a point.

The best way to make an impact, she added, is at the local level, where policy changes can happen quickly and constituents can see the effects.

'They don't get support'

She says one or more of them could lead the country — if they're given a chance.

"Women have always played an important role in politics when they come out to vote," Shehu Adamu Rijau, a man from Niger state, told VOA. "But when they compete as candidates, they don't get support."

In both houses of Nigeria's National Assembly, women hold only about six percent of the seats, according to the Inter-Parliamentary Union, a group based in Geneva, Switzerland.

The country has never had a female president, and that won't change this year, after the only female candidate withdrew a few weeks ago.

But long odds don't discourage Umar. Instead, they push her to try harder. Before long, she envisions a Nigeria with a very different political landscape.

"We are going to have a female president soon in Nigeria," Umar said.

What Buhari Said to Nigerians A Day Before Elections
Tagged:
Copyright © 2019 Voice of America. All rights reserved. Distributed by AllAfrica Global Media (allAfrica.com). To contact the copyright holder directly for corrections — or for permission to republish or make other authorized use of this material, click here.