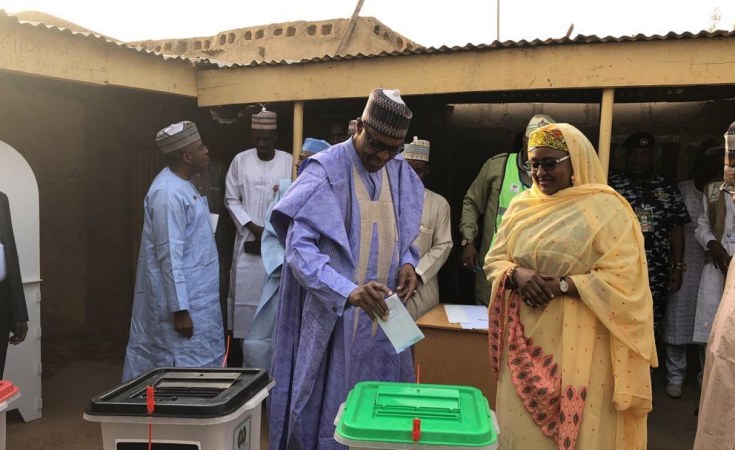 President Muhammadu Buhari has cast his vote in Daura, his home town in Katsina State.

The president voted at about 8:05 a.m, the first person to do so in Polling Unit 003 at Sarkin Yara Ward in Daura Local Government Area.

It took Mr Buhari only a few minutes to cast his votes.

Mr Buhari arrived Katsina earlier on Friday alongside his wife, Aisha aboard a presidential jet.

He was subsequently flown to Daura by a presidential helicopter.

It is not clear if the president will remain in Daura or return to Katsina after voting on Saturday.

He was in Daura last week to vote but was forced to return to Abuja after the Independent National Electoral Commission (INEC) postponed the election hours before voters were expected to head to polling units.

Mr Buhari is one of the 73 candidates on the ballot in the presidential election.

Previous Story
#NigeriaDecides2019 - Why Elections May Record High Number of Void Votes
Next Story
"I Am Going to Be the Winner", Says Buhari As He Votes

#NigeriaDecides2019 - Why Elections May Record High Number of Void Votes

"I Am Going to Be the Winner", Says Buhari As He Votes

So Far, a Neck and Neck Race as Nigeria's Poll Results Trickle In
Tagged:
Copyright © 2019 Premium Times. All rights reserved. Distributed by AllAfrica Global Media (allAfrica.com). To contact the copyright holder directly for corrections — or for permission to republish or make other authorized use of this material, click here.