Sudan Opposition Vows to Press on Against Bashir, Despite 'Emergency' 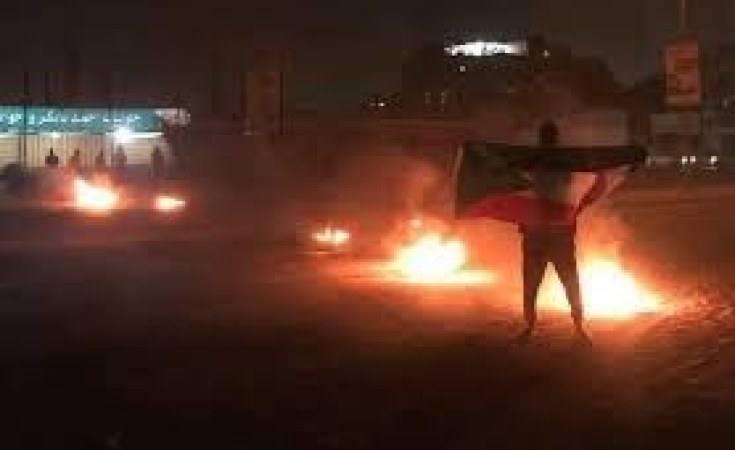 Photo: Radio Dabanga
A protester holds a Sudanese flag at a street blockade in Omdurman
Voice of America (Washington, DC)
By Edward Yeranian

Sudanese opposition groups, including the influential trade union association that is leading political protests against the government, are saying that they will continue their demonstrations against President Omar al-Bashir, despite a series of political shuffles he has made during the past 24 hours. Bashir declared a "state of emergency" in a Friday night speech, and replaced most of his government.

Protesters continued to chant slogans against the government and President Bashir overnight after initial hopes that he was stepping down were dashed by a televised speech he made to the nation.

He said that he was declaring a "state of emergency" across the country for a one-year period, and dissolving both the national and provincial governments, urging citizens to shun chaos in the streets, and promising leniency to young people involved in demonstrations.

Sudanese journalist Osman al-Mirghani told several Arab news channels that he did not think the changes Bashir announced were sufficient, insisting that the goal of the opposition remained the ouster of the president.

Mirghani said that the changes announced by the president were just a fresh impetus for further popular protests and the next step in the ultimate ouster of the Bashir.

The Sudanese Association of Trade Unions has called for more protests against the government and Bashir, insisting that he must step down. Despite the calls, the intensity of protests appeared to diminish a notch Saturday afternoon, as many people adopted a "wait-and-see" attitude.

No way out for Bashir

Egyptian political sociologist Said Sadek told VOA that he thinks the goal of Bashir's political shuffle was to divide the opposition:

"The aim was that he wanted to break down the opposition between those who would accept the concessions and feel that this is enough... and the fanatics. He wants to isolate and then target them," he said.

Sadek, however, does not believe that the strategy will work in the long term. "Bashir," he argued, "is making the same kinds of concessions that [former Egyptian president] Hosni Mubarak and (former Tunisian president) Zein al Abidine Ben Ali made before they were forced to resign." But the "problem with Bashir is that he has nowhere to go. This is the problem with all dictators in the Middle East. There is no safe exit for them."

President Al-Bashir Moving Sudan to 'Dangerous New Ground'
Tagged:
Copyright © 2019 Voice of America. All rights reserved. Distributed by AllAfrica Global Media (allAfrica.com). To contact the copyright holder directly for corrections — or for permission to republish or make other authorized use of this material, click here.