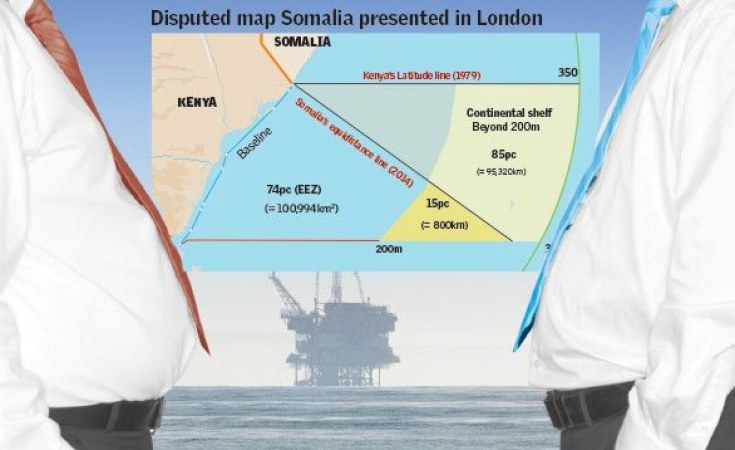 Kenyan authorities are blaming external players with interests in oil, gas and fishing for the ongoing diplomatic spat with Somalia over the common border in the Indian Ocean.

The diplomatic flare-up is also being seen as arising from emerging regional security concerns and internal Somali politics as the country prepares for next year's elections.

The presidential election planned for 2020 and regional elections, especially in Jubbaland, have generatedmuch heat in Somalia, where President Mohamed Abdullahi Mohamed Farmajo's government is trying to entrench itself and increase its chances of winning the polls.

It is not lost on the Farmajo regime that Jubbaland leader, Sheikh Ahmed Madobe is allied to Kenya, a position Mogadishu is uncomfortable with and has been determined to change.

Kenya needs Madobe to ward off Al Shabaab, from whom the Kenya Defence Forces took Kismayu, the capital of Jubbaland, in 2012.

Jubbaland State stretches along the entire northeastern Kenyan border, effectively creating a buffer zone with the rest of Somalia. Madobe also needs Kenya because the majority of his Ogaden clan whose support he needs to stay in power, live in Kenya.

Somalia and Kenya remain culturally and economically joined at the hip and it was therefore a surprise when Nairobi sent back the Somalia ambassador on February 16 and recalled its own from Mogadishu over Somalia's alleged auctioning of disputed offshore oil blocks that are the subject of a suit at the International Court of Justice in The Hague, Netherlands.

Kenya's Foreign Affairs Cabinet Secretary Monica Juma on Thursday told journalists at a press conference in Nairobi that the Kenyan Cabinet had reiterated at a meeting chaired by President Uhuru Kenyatta that it would not cede any of its Indian Ocean resources, signalling that the standoff was far from over.

The government of Somalia and Spectrum Geo, the company that hosted the February 7 Somalia Oil Conference in London, and conducted a 2D offshore seismic survey, have dismissed Kenya's claims that oil blocks were auctioned.

Spectrum insists that no seismic data was acquired in the area that is the subject of maritime delimitation case at the ICJ, and whose hearing could begin any time now.

Kenya however maintains that Somalia auctioned some of the offshore oil blocks within the disputed 100,000 square kilometres. Dr Juma cited blocks 230, 231, 232 and 233 as the oil blocks Somalia offered bidders at the London conference, insisting they belong to Kenya's maritime zone.

"Somalia's action of offering the oil blocks for sale undermines the principle of good faith and defeats the purpose of waiting for the Court to make the final determination," Dr Juma said.

Kenya reckons that these actions by the government of Somalia constitute a threat to relations and are likely to jeopardise peace and security in the two countries and the entire region.

"Somalia cannot say that it has done nothing wrong when it has initiated the entire tendering process, and marked the bidding to end in September, the signing of agreements with bid winners in December, and the production to start in January 2020," said Dr Juma.

Observers have been dismayed by the turn of events between two neighbouring states that can ill afford a major diplomatic dispute.

Somalia's economy is highly dependent on Kenya's, while Somalia is a huge market for Kenyan goods and khat. Kenya on its part, critically needs Somalia's co-operation to weaken the Al Shabaab Islamist militants.

Dr Juma conceded that Somalia is a close trading partner and that Kenya has been promoting peace and security in the neighbouring state more than any other country since 1980s.

President Farmajo, who rose to power in 2017, has arguably had the closest relations with the Kenyan leadership - until now.

Diplomacy analysts reckon that Somalia's decision to exhibit seismic data of oil blocks to potential buyers in London on February 7 was sponsored by those who are keen to exploit the resources off the shores of Somalia.

British companies Soma Oil & Gas and Spectrum Geo are among firms that have conducted seismic surveys and mapped out Somalia's promising oil reserves along the Indian Ocean coast between the cities of Garad and Kismayu, totalling 100 billion barrels.

The question however remains whether Mogadishu has the capacity to monitor exploration and production activities or even the legal grounding to enter into contracts of that nature.

Somalia has yet to enact the law governing oil and gas, and the proposed Somalia Petroleum Authority is yet to be constituted. More important is the fact that Somalia is currently governed by an interim Constitution. In the circumstances, many legal experts believe the legality of any deal signed could be challenged.

A source close to the Kenyan government told The EastAfrican that Somalia's latest actions are being driven by commercial interests in the offshore resources.

Besides the British, other companies interested in the offshore resources, including fishing, are Dutch, French, Norwegian, Canadian, Chinese and Japanese.

The maritime border dispute has simmered over time, culminating in Somalia's filing of a suit at the ICJ in 2014 accusing Kenya of encroaching on its 100,000-square-kilometre marine territory with potential oil and gas deposits in the Indian Ocean. Before then, bilateral negotiations had dragged on for six years without much success.

On its part, Somalia says the boundary extends to the southeast as an extension of the land border. This would take a large swathe of what Kenya considers its EEZ.

There is concern that adoption of the Somalia principle could upset border delimitation along the entire eastern seabed of Africa, opening a diplomatic tinderbox.

Kenya, in 2012, submitted an application to acquire an additional 103,000 square kilometres to delineate the outer limits of the country's continental shelf outside the EEZ of 200 nautical miles.

This hit a snag because Kenya does not have a maritime border agreement with Somalia - one of the UN requirements for countries that share the ocean.

Kenya had awarded acreage L5 to Anadarko Petroleum Corporation and block L22 to Total of France within its EEZ. Eni of Italy has acreage L21, L23 and L24. Block L25 is vacant as negotiations with Statoil of Norway were not concluded in 2012.

Former Somali president Hassan Sheikh Mahmoud had objected to Kenya's activities in the Indian Ocean on the grounds that there was a danger of Nairobi encroaching on Mogadishu's resources at a time of instability.

The question is why Somalia rushed to showcase its marine resources to potential investors at a time when the hearing of the case is about to start.

The EastAfrican has learnt that Somalia Prime Minister, Hassan Ali Khaire, was on January 28 and 29 in Nairobi for a two-day high level consultations with Kenya's top leadership where they discussed the issues of security co-operation and the maritime dispute.

This followed an announcement by Somalia in November 2018 during the Africa Oil week in Cape Town, South Africa, that it was in the process of mapping its offshore oil blocks and was preparing to offer the blocks for auction.

Other sources say Somalia's showcasing in London had something to do with the internal politics around the ongoing elections in the five regional states and the forthcoming presidential elections in 2020.

At stake is the elections in Jubbaland in August, where Mogadishu is hoping to oust the incumbent, Sheikh Madobe, who is seen as a Kenyan proxy and who was also among the ringleaders of the decision to suspend the co-operation between regional states and the centre in September last year.