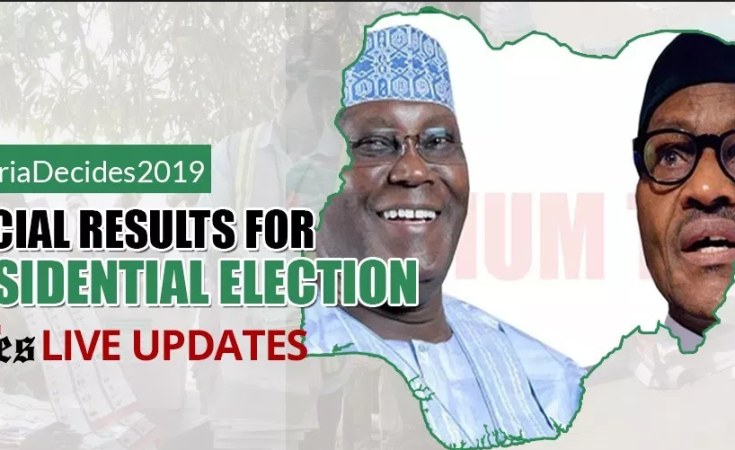 The Nigerian government has accused the main opposition party, PDP, of plans to "truncate the electoral process."

The government stated this in a statement by the information minister, Lai Mohammed.

The Federal Government has strongly warned against ongoing plans by the desperate opposition to truncate the electoral process and render the Feb. 23rd elections inconclusive, in order for them to trigger a constitutional crisis and push for an interim government.

The Minister of Information and Culture, Lai Mohammed, issued the warning in a statement issued in Oro, Kwara State, on Monday.

He said the PDP has started laying the groundwork for a constitutional crisis by unleashing its talking heads, including Buba Galadima, Osita Chidoka and Femi Fani-Kayode, on the public space to claim victory from Saturday's election, even when INEC has yet to announce the result - an action that amounts to a clear case of impunity.

Mr Mohammed said by usurping the role of INEC through the announcement of result, the PDP has violated the Electoral Act and should face very serious consequences.

"By announcing the result and saying they have won the Feb. 23rd election, the PDP is deliberately seeking to confuse the polity and lay the foundation for rejecting the outcome if, when INEC eventually announces the result, the party does not win.

"This confirms what we said in a series of pre-election press conferences, that the PDP - realizing it cannot win a free and fair election - will do everything possible to scuttle the polls, failing which it will proceed to the next stage, which is to discredit the entire electoral process, including the result, with the ultimate aim of precipitating a constitutional crisis and pushing for an interim government," he said.

The Minister also recalled the alarm raised by the Federal Government over the PDP's decision to set up a parallel electoral body, under the tag of Parallel Voting Tabulation (PVT) System, which the opposition party described as a tool that will determine whether or not it accepts the results of the elections.

"We said, then, that while it is standard practice for political parties to have their own monitoring systems during elections, what is not standard is to set up a pseudo electoral commission and imbue it with the power to collate and announce results - as the PDP is now doing under the guise of PVT. Unfortunately, our warning has proven to be prescient," he said.

Mr Mohammed wondered why those who parade themselves as democrats will show such disdain for the electoral process, which is a key ingredient of democracy.

He called on the security agencies to nip in the bud the constitutional crisis that the PDP is working frantically to trigger, by immediately arresting and prosecuting anyone who announces the result of last Saturday's