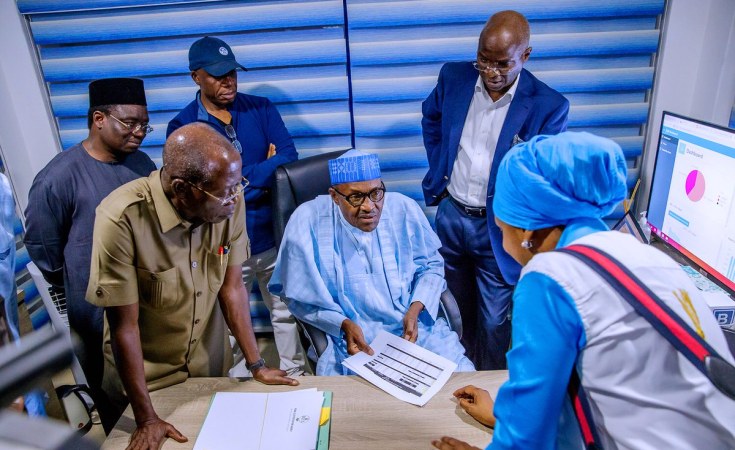 @MBuhari/Twitter
President Muhammadu Buhari at his campaign headquarters in the run-up to the announcement of the election result.
Daily Trust (Abuja)

The Peoples Democratic Party, PDP, failed in its bid to stop the declaration of President Muhammadu Buhari as the president-elect by the Independent National Electoral Commission, INEC

The agent of the PDP and a former Aviation Minister, Osita Chidoka, tried unsuccessfully to urge the INEC boss to abort the declaration.

According to him, there are 5.1 million voters who could not vote as a result of cancelled votes, difference in voters registers among others. He said they cannot be ignored as it is higher than the 3.9 million votes that Buhari is leading with in the exercise.

However, the INEC brushed him aside. He said they are 'deserved cancelled votes' as in most areas the smart card readers were deliberately 'circumvent' the card readers.

Yakubu also said what ever difference in figures was not significant enough to affect the outcome of the results.

Speaking afterwards, Chidoka who did not signed the results sheet told newsmen at the centre that the party does not accept the result as representing the valid votes of Nigerians.

"We have made three issues; first after all the investment in technology, we required INEC, after spending N27bn in this year's budget alone for technology, we had expected that today, INEC would have for the purpose of transparency not just for law would have projected to us the result of what the card reader that they used displayed about the people that went through the card reader verification, that singular act put a dent in the image of the election.

"The second one is the issues we raised about the number of registered voters vis-à-vis if what the chairman now calls collated voters means that 1.6 million people are missing in the voter register. We think that issue is substantial enough to require a resolution. We also believed that difference between the accredited voters and the voter votes cast which came to about 750,000 votes requires an issue to be looked at.

"We believed that the cancellations that took place in the election impacting 2.7 million voters required be looked into seriously. So, in our view this election required to be looked at again and possibly we would have had rerun, more importantly, we think that INEC should have looked consciously to the use of the card reader, the absence of card reader is a major violation in the election laws, it renders that election null and void, that is what the chairman promised us.

How Prominent Nigerian Politicians Lost in Their Polling Units

Atiku Rejects Nigeria's Election Results, Heads to Court
Tagged:
Copyright © 2019 Daily Trust. All rights reserved. Distributed by AllAfrica Global Media (allAfrica.com). To contact the copyright holder directly for corrections — or for permission to republish or make other authorized use of this material, click here.