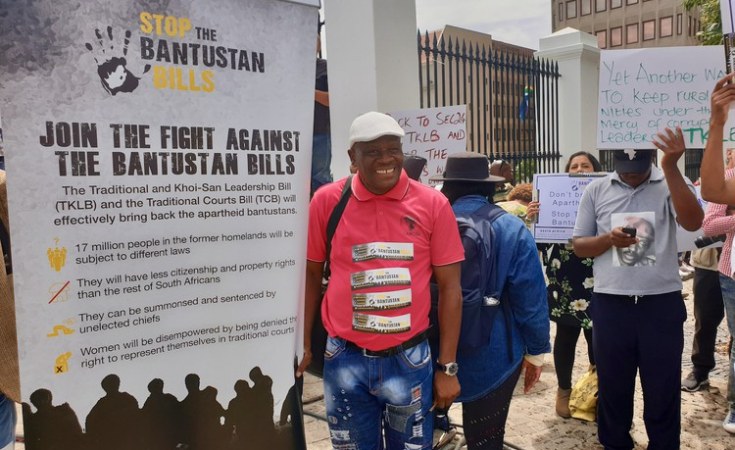 Mary-Anne Gontsana/GroundUp
David Ramohanoe, co-ordinator of the Alliance for Rural Democracy, says it is opposed to the Traditional and Khoekhoe, San Leadership Bill because it is is a return to apartheid-type laws.
SAnews.gov.za (Tshwane)

The National Assembly has passed the Traditional and Khoi-San Leadership Bill (TKLB).

This comes after the National Council of Provinces (NCOP) amended the bill on 10 January 2019.

In a statement, the Cooperative Governance and Traditional Affairs (Cogta) Ministry said the bill was referred to the NCOP after its Second Reading Debate in the National Assembly, which took place on 7 November 2017.

Following amendments by the NCOP, the Cogta Portfolio Committee considered the TKLB on 13 February 2019 ahead of final consideration by the National Assembly.

"In addition, the Bill went through a process of extensive public hearings and stakeholder engagements during 2015, 2016 and 2017 led by the CoGTA Portfolio Committee. The Committee further improved the Bill through amendments and finalised it in October 2017.

"During 2018, the Cogta Select Committee and provincial legislatures considered the Bill making further amendments and finalising on 4 December 2018," ministry spokesperson Musa Zondi said in a statement.

The bill is intended to:

Consolidate the existing national legislation relating to traditional leadership and to address the shortcomings of such legislation in order to improve the implementation thereof.

Make provision for the first time ever for the statutory recognition of the Khoi-San communities and leaders.

Following the final passing of the bill by the National Assembly, it will be referred to the President for assent.

"It will thereafter be published in the Government Gazette as a new law. However, it should be noted that the Bill will not come into operation on the date it is published in the Gazette. The commencement date will be determined through a presidential proclamation," said Zondi.

One of the reasons for this, he said, relates to the Commission on Khoi-San Matters provided for in the bill.

"This commission will play a crucial role in assisting government with the recognition process of Khoi-San communities and leaders.

"Since the bill contains timeframes within which applications for such recognition may be lodged, it is important to finalise certain preparations before the new law comes into operation and the commission commences with its work. This is to ensure that communities and leaders, who may apply for recognition, are not disadvantaged by the statutory timeframes," he said.

The preparatory work in respect of the commission will be done in accordance with the provisions of section 14 of the Interpretation Act, 1957. The section states that where a law confers a power to, amongst others, make any appointment (such as the appointment of members of the commission), "... that power may... be exercised at any time after the passing of the law so far as may be necessary for the purpose of bringing the law into operation at the commencement thereof...". 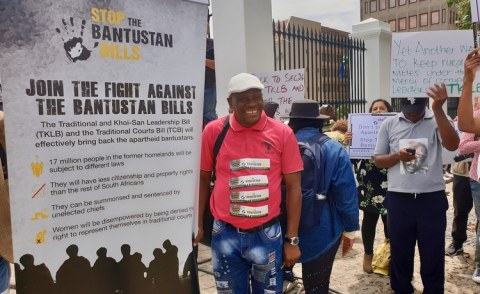 South Africa's Bill on Khoekhoe, San Leadership a Step Backwards?
Tagged:
Copyright © 2019 SAnews.gov.za. All rights reserved. Distributed by AllAfrica Global Media (allAfrica.com). To contact the copyright holder directly for corrections — or for permission to republish or make other authorized use of this material, click here.