Namibia - Dispute Over Return of the Witbooi Bible 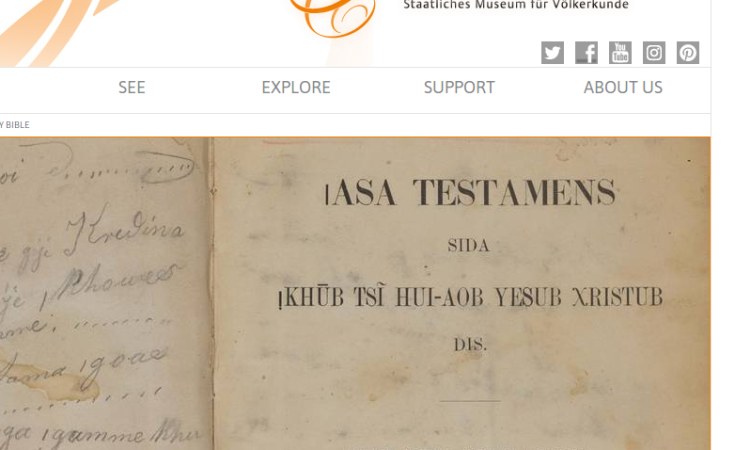 A museum in Stuttgart has returned to Namibia a bible and whip that once belonged to Chief Hendrik Witbooi after more than 120 years, a step towards reconciliation between Germany and Nambia.

Authorities are expected to be present at the national handover event of the two artifacts on Thursday, 28 February. The artifacts returned home after over ten decades, however, raised controversy of who they should be handed over to. They will be kept at the national archives although the Witbooi Traditional Authority believes they are the rightful custodians.

These are the first African artifacts from the colonial era that the federal state of Baden-Wuerttemberg is returning. They have been on display at the Linden Museum in Stuttgart until now. "With the return, we are taking an important step in the process of reconciliation. The state is facing up to its colonial past," said Baden Wuerttemberg's Minister of Science, Theresia Bauer.

"The return has symbolic meaning because Hendrik Witbooi is an important person for Namibia. We want to enter into close dialogue with our partners on the ground," Sandra Ferracuti, curator at the museum, told DW. Apart from the handover, the state government is providing €1.2 million ($1.3 million) for joint projects with research institutions and museums in Namibia.

Whose Bible is it?

Namibia's government has been asking for the return of the Bible and the whip for years. During the colonial times, the so-called "Kaptein" Hendrik Witbooi was an important leader of the Nama people. He was initially baptized by German missionaries and collaborated with the colonial administration. Later he changed and fought against the German colonialists. Witbooi died in 1905 after an encounter with German colonial soldiers. In the following years, they brutally quelled the rebellion of the Herero and Nama. Tens of thousands of people lost their lives. Since 2015 the German government refers to it as genocide.

But the planned return shows how deep the cracks in Namibian society are when it comes to dealing with their past. Namibia's government wants the Bible and the whip, to be exhibited in the national archives until a museum is built in Witbooi's hometown of Gideon. It is still not clear when this will be. Not all Nama people agree with that. The Nama Traditional Leaders Association (NTLA) even wanted to legally stop the restitution, but Stuttgart's state constitutional court said it was not responsible. "The items belong to an individual. If it was part of the household estate, it should have ended in the hands of the Church or the family and the family would have decided what to do with it," NTLA General Secretary Lazarus Kairabeb told DW.

'History has been suffocated'

Although Germany and Namibia have been negotiating with the German government on the recognition of the genocide, an official German apology remains to be seen. Representatives of the Herero and Nama like the NTLA believe that both governments are not serious at all. "History has been suffocated for so long and there is a discussion going on in Namibia about the history [of genocide] and why it is being neglected. It seems that Namibia has no philosophy and no position on how the deal with this history," NTLA representative Kairabeb complained.

Dispute between Herero and Nama

When human bones from the colonial era were returned to Nambia last year, some of the representatives of both ethnic groups present were already furious. They strongly demanded to be involved in the negotiations and criticized the German conduct. Other Herero and Nama associations, on the other hand, support the course of their government. They belong to a team of people that advise the government on its negotiations. The return of the Witbooi artifacts has also led to disputes: According to media reports from Namibia, the prominent Nama activist Ida Hoffman criticized the approach of the NTLA.

On the other hand, the state government of Baden-Wuerttemberg says that Witbooi's family agreed on the return the two artifacts to the Namibian government. Namibia's government refutes the accusation that it does not take the wishes of the Herero seriously. "The government is keeping the door open. Namibians, who are not part of the negotiations should be persuaded to join in because, at the end of the day, this is not intended to benefit only a few people", said Namibia's Speaker of National Assembly Peter Katjavivi. Recently, German Development Minister Gerd Müller was positive that Namibia and Germany will agree on the reparations by the end of the year. But until that happens, the dispute is likely to continue.

First Apology From a German Govt Official for Atrocities

Namibia Rejects Germany's Genocide 'Reparations Offer'
Tagged:
Copyright © 2019 Deutsche Welle. All rights reserved. Distributed by AllAfrica Global Media (allAfrica.com). To contact the copyright holder directly for corrections — or for permission to republish or make other authorized use of this material, click here.