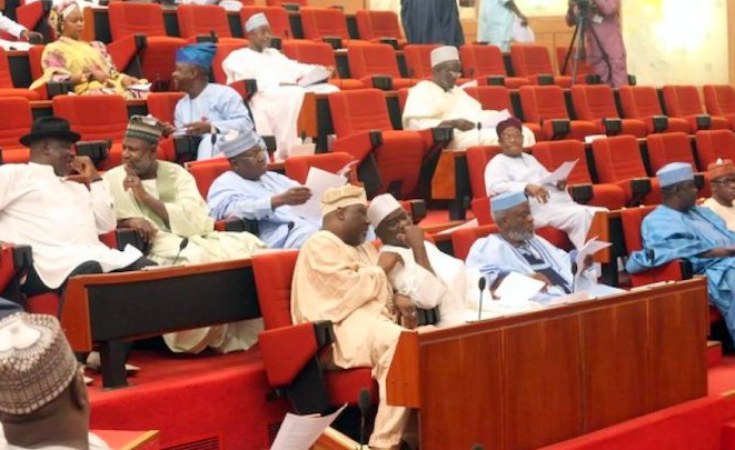 On February 23, Nigerians in various part of the country went out in their numbers to different polling units to elect a president and lawmakers that will represent them in the 9th National Assembly.

The lawmakers elected include 109 senators and 360 members of the House of Representatives.

Those elected will replace members of the outgoing 8th Senate and House of Representatives.

The 8th National Assembly, particularly the Senate will be remembered for many things including its various controversies. These include the controversy that trailed the election of its principal officers, invasion of the Senate chamber by thugs who stole its mace, and mass defection of members including the president of the Senate, Bukola Saraki.

The 8th Senate also had several members, including Mr Saraki, who faced corruption charges. They were frequently in courtrooms, and the custody of anti-corruption agencies, answering questions for their alleged corrupt practices. Some of the cases are still ongoing.

Like the outgoing Senate, the 9th Senate will also have members who are facing major corruption probes with some already being prosecuted. About 10 per cent of the newly elected Nigerian senators are facing corruption probes. Some are already being prosecuted. They include former governors who allegedly stole state funds while in office and other public officials. All of them have, however, denied any wrongdoing.

The former governor of Abia State won the Abia North senatorial election on the platform of the All Progressives Congress (APC).

The EFCC is prosecuting Mr Kalu for allegedly stealing Abia funds while in office. He is being prosecuted alongside his former commissioner for finance, Ude Udeogo, and a company, Slok Nigeria Ltd, said to be owned by him.

Mr Kalu's original trial started just after he left office in 2007. In October 2016, EFCC renewed its prosecution and preferred 34 count charges against Mr Kalu. But he and Mr Udeogo pleaded not guilty to the charges and were granted bail.

The EFCC ultimately reactivated Mr Kalu's case last year, filing amended graft charges of up to N7.7 billion against him. In November 2018, a judge frowned at Mr Kalu's foreign travel without the permission of the court and the EFCC. That did not deter the former Abia governor from returning to Nigeria and contesting, winning a senatorial election.

The former governor of Benue State is the senator-elect for Benue North Senatorial District under the PDP.

The federal government is prosecuting Mr Suswam and two others for alleged diversion of N9.79 billion while he was in office as governor.

Those charged alongside Mr Suswam in the 32- count charge are Omadachi Oklobia, his former commissioner for finance, and Janet Aluga, a former accountant, Benue State Government House.

‎In the charge, the trio allegedly cornered the said funds between 2012 and 2015 while Mr Suswam was governor of the state.

Mr Nnamani, his former aide, Sunday Anyaogu, and six companies were first arraigned in 2007 for allegedly conspiring to divert about N5.3 billion from the coffers of Enugu State.

The case had been handled by no fewer than three judges.

In February 2018, the Lagos Division of the Federal High Court dismissed the charges against Mr Nnamani, for lack of "proper charges" before the court. The EFCC vowed to file fresh charges, saying it has strong evidence against the ex-governor.

Mr Ubah, a former governorship candidate in the state, defeated his closest rival, Chris Uba of the Peoples Democratic Party (PDP) who got 62,462 votes.

The Economic and Financial Crimes Commission is investigating and prosecuting Capital Oil and Gas Limited and its Managing Director, Mr Ubah, for their alleged complicity in a fraud worth N43.29 billion, perpetrated through the petroleum subsidy scheme.

The EFCC and the police accused Mr Ubah and his company of obtaining subsidy payments by false pretences, stealing, money laundering and forgery with respect to the alleged fraudulent payment of N43.29 billion in the transactions conducted in 2011.

He was arraigned for an alleged fraud of N322 million by the EFCC in April 2018.

Mr Nwaoboshi was in court alongside two firms on charges bordering on conspiracy and money laundering.

The judge, Mohammed Idris of the Federal High Court on April 25, 2018, ruled that the senator should be remanded in prison. He got bail two days after. The trial is ongoing.

The former interior minister, Abba Moro, of the PDP was declared as the winner for Benue South Senatorial seat.

Mr Moro, who served under ex-president, Goodluck Jonathan, was sued for fraud over a botched recruitment drive, which led to a stampede that left 20 people dead in 2014.

Former Minister of Interior, Abba Moro being arraigned by the Economic and Financial Crimes Commission at the Federal High Court

He is currently facing trial though he has pleaded not guilty to his role in an alleged $2.5 million (£1.8 million) fraud, involving missing application fees.

Stella Oduah of the PDP won the February 23 Anambra North Senatorial election. She is a former aviation minister and is a returning senator.

She won the election with 113,989 votes against her closest rival from the All Progressives Grand Alliance (APGA) who had 59,937 votes.

She is also on the list of people being questioned by the EFCC for alleged money laundering.

In February 2018, she was questioned by the EFCC and had her passport seized.

Mrs Oduah is being investigated for allegedly awarding dubious contracts worth N9.4 billion during her stint as aviation minister in the Goodluck Jonathan administration.

Specifically, she was accused of diverting N3.9 billion from the N9.4 billion meant for the installation of security devices at 22 airports.

She has denied the allegations and is yet to be prosecuted.

The deputy senate president was declared the winner of Enugu West Senatorial District for the fifth time in Saturday's presidential and National Assembly elections.

Mr Ekweremadu of the PDP polled 86,088 votes to defeat his closest rival, Juliet Ibekaku-Nwagwu of the APC who scored 15,187 votes.

The federal government, in March 2018, applied to the Federal High Court in Abuja for an order of temporary forfeiture of about 22 properties allegedly owned by him in Abuja, London, the United States and the United Arab Emirates.

The EFCC detained him for questioning on August 1, 2018.

He has denied all the allegations.

A former governor of Gombe State, Danjuma Goje of APC, won the seat of Gombe Central Senatorial District for the third time.

He is currently facing a fraud charge filed against him by the EFCC at the Federal High Court in Gombe.

The EFCC alleged that Mr Goje, then Gombe State governor, conspired with four officers of his administration to defraud the state of N25 billion via illegal acts, contrary to, and punishable under sections 15, 16, 17, 18 and 19 of the Money Laundering (Prohibition Act) 2011, as amended.

Mr Adamu of the APC won Nasarawa West senatorial district election with 115,298 votes in the election that was held on Saturday, February 23.

The former governor of Nasarawa State was in 2010 arrested by the EFCC for allegedly misappropriating N15 billion alongside 18 others.

He was subsequently arraigned on a 149-count charge of fraud to the tune of N15 billion alongside his co-accused.

The case is yet to be concluded.

In February 2018, the EFCC also arraigned Nuraini Adamu, a son of the senator, and one Felix Onyeabo Ojiako before Justice Farouq Lawal of the Kano State High Court on a four-count charge of conspiracy, forgery and obtaining money by false pretence.

Mr Wamakko, who was governor between 2007 and 2015, is under investigation over allegations of theft of public funds and money laundering totalling N15 billion, an allegation he has vehemently denied.

The EFCC in April 2018, confirmed that the commission was investigating allegations contained in a petition against Mr Wammako.

Dino Melaye of the PDP was declared the winner of the Kogi West Senatorial election held on February 23.

He has been accused of varying allegations on several occasions and is being prosecuted in Abuja and Lokoja.

However, unlike others, his trial is mainly not corruption-related.

Last year, he was accused of providing false information to the police and supplying arms to suspected criminals.

In Abuja, he was accused of attempted suicide and damaging government property, after he allegedly attempted to jump out of a moving police vehicle. He was later hospitalised.

The police laid siege to the Abuja residence of Mr Melaye to effect his arrest over a case of culpable homicide last year.

Earlier, Mr Melaye and his group were accused of shooting a police officer, Danjuma Saliu, attached to 37 Police Mobile Force (PMF), while on duty in Aiyetoro Gbede, Mopa Road in Kogi.

A Lagos-based lawyer, Ademola Owolabi, reacting to this development told PREMIUM TIMES that there are moral and legal angles to the lawmakers' cases.

"We have a moral angle and a legal angle. For the legal angle, they have not been convicted. But on the moral part of it all, in so many countries corrupt cases are dealt with in days. It then becomes a mockery of our moral standard if we have corrupt charges running for years like the man in Abia State (Orji Kalu)."

"They should clear their names before going into any job that warrants public trust. This country is a very funny country," he said.

Another right activist and public affairs analyst, Ebi Vincent, said the election of politicians with corrupt charges speaks volumes of "our system".

"We run a dying and corrupt judicial system and when the judicial system is slow and corrupt, you cannot find anything sane in the nation. All of these persons ought to screened and denied ticket even in their party let alone coming out to be on INEC ballot paper."

"Nigerians need to demand the removal of these persons. If the people in their Constituency refused to understand that they have elected 'thieves', the media and right activist should continue to hold them accountable.

"For anyone to have been alleged at all, it means they have skeletons in their cupboard. The Senate should not be retirement home for looters," he said.

Senators Who Will Not Be Part of the 9th Assembly