Nigeria: My Election Is Victory for Nigeria, Says Buhari 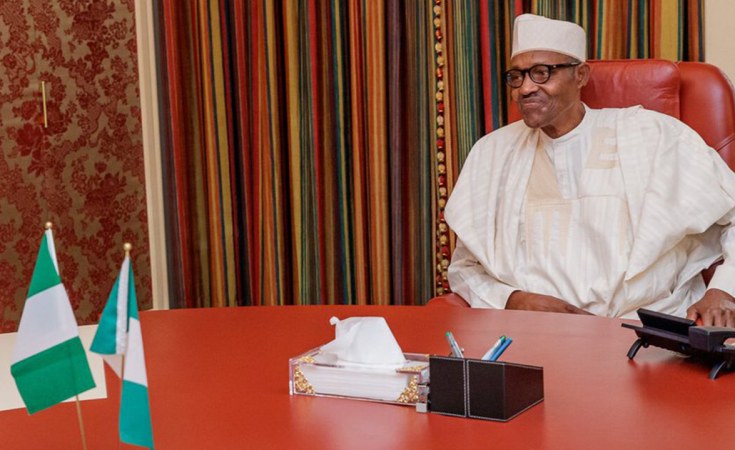 Abuja — President Muhammadu Buhari Wednesday moved to assuage feelings injured by his victory at last Saturday's presidential contest, telling his supporters to be magnanimous in victory and not humiliate those that lost out at the poll.

Receiving his certificate of return along with Vice President Yemi Osinbajo from the Independent National Electoral Commission (INEC), the president said his re-election by Nigerians is victory for the country and promised to run an inclusive government.

The electoral body had Wednesday morning declared the president as the winner with over 15 million votes against over 11 million votes scored by his closest rival and presidential candidate of the Peoples Democratic Party (PDP), Alhaji Atiku Abubakar.

Presenting the certificates to the president and his deputy at the International Conference Centre (ICC), INEC Chairman, Prof. Mahmood Yakubu, said the presentation was in line with a provision of the Electoral Act that certificates of returns should be presented to winners of elections within seven days of their declaration.

Speaking after receiving his certificate, Buhari, who was accompanied to the ceremony by his wife, Aisha, and notable party men such as the National Chairman of the APC, Mr. Adams Oshiomhole, and the National Leader of APC, Senator Bola Tinubu, said comments of both the local and international observers on the election, showed that it was free and fair.

"From the comments of several observers both local and foreign, it is obvious that the elections were both free and fair," he said.

According to him, the outcome of the election was victory for the country, adding that the next administration would run an open and all inclusive government where all parties would be duly engaged.

The president further stated that it is only by running an open and all inclusive government that a country of "our dream" that is free from impunity could be built based on the principles of rule of law and hard work.

Buhari also said his search for the highest office in the land was not dictated by any other motive but the desire to serve Nigeria with his heart and might and consequently lay the foundation for a future that the next generation could be proud of.

The president, who expressed gratitude to the 15 million Nigerians whom he said voted for him during last Saturday's presidential election, also thanked them further for the confidence reposed in the APC.

He said: "I, therefore, want to assure that we will continue to engage all parties that have the best interest of Nigerians at heart. Our Government will remain inclusive and our doors will remain open. "That is the way to build the country of our dream; safe, secure, prosperous, and free of impunity and primitive accumulation by those entrusted with public offices.

"The hard work to deliver a better Nigeria continues, building on the foundations of peace, rule of law and opportunities for all. We will roll up our sleeves afresh, and give it our all.

"We have no other motive than to serve Nigeria with our hearts and might, and build a nation, which we and generations to come can be proud of.

"I am very grateful to the over 15 million citizens who voted for me, those who contributed in many ways in the running of our successful campaign, and those at home and abroad who expressed confidence in me and the APC Government. I thank you all."

Promising that his second coming would see the country moving towards the next level, Buhari added that the government would explore issues contained in the campaign manual and even expand them further to include what he termed other focal areas highlighted during the electioneering process.

He lamented the loss of lives during the polls, saying his heart went out to the families of those who lost their lives during the election and submitted that election shouldn't be a do-or-die affair as he congratulated other gladiators in the race, describing the conclusion of the election as another milestone for the country.

According to the president, "I can assure that you will see a country moving to the Next Level, as we consolidate on our fundamental areas of securing the country, reviving the economy, and fighting corruption. Many other focal areas, as stated in our campaign manual, will be added, to the good things we plan for our country.

"Let me pay tribute here to those who lost their lives either through accidents or mindless violence during the course of these elections. My heart and thoughts are with the families of the victims. May God comfort and give them the fortitude to bear the loss.

"Election is not war, and should never be seen as a do or die affair. I pray that we all accept this democratic approach to elections, however contentious," Buhari added.

UK, China, Others Congratulate President on His Re-election

Meanwhile, the UK Government has congratulated the president on securing a second term of office.

A statement from the British High Commission in Abuja Wednesday, quoted the Minister of State for Africa, Harriett Baldwin, as saying, "I offer my congratulations to President Buhari on securing a second term as the Nigerian President.

"The UK is a long-standing friend and partner of Nigeria and the Nigerian people and a stable and prosperous Nigeria benefits Africa and the world."

Baldwin commended Nigerians for their resilience and commitment to democracy.

She said the results declared by INEC were consistent with the results obtained through the civil society Parallel Vote Tabulation process.

"Along with our international partners, the UK believes the Nigerian people can have confidence in the result," the minister said.

She, however, recognised the concerns expressed by Nigerians on the conduct of the election, in particular logistics and results collation, and reports of intimidation of electoral officers.

The minister urged any party or individual who wished to challenge the process to do so peacefully and through the appropriate legal channel.

"We encourage Nigerian authorities to examine all allegations of wrongdoing carefully, and take the necessary action against individuals found responsible."

She also condoled with the families and friends of those who lost their lives in election-related violence.

"No one should die in the exercise of their democratic rights," she stated.

She reiterated the continued support of the UK Government to Nigeria and its civil society "in drawing lessons from these elections and strengthening its democracy."

Also commenting on the election, the Chinese government pledged its readiness to work with new government of Buhari.

In a letter congratulating the president on his re-election, the Foreign Ministry spokesperson, Lu Kang, said at a daily news conference in Beijing that Nigeria is China's strategic partner of cooperation in Africa and as such the country will strengthen its partnership with Nigeria.

"China always attaches high importance to bilateral ties and stands ready to work with the new Nigerian government to strengthen exchanges and cooperation in various fields and bring more benefits to the two peoples," Lu said.

Taking to his verified Twitter handle, Kenya's President Uhuru Kenyatta said Buhari's victory was a demonstration of the confidence Nigerians have in his leadership.

He tweeted: "Congratulations H.E. @MBuhari on your re-election for a second term as the President of the Federal Republic of Nigeria. Your victory is a clear demonstration of the trust and confidence the people of Nigeria have in your ability to lead the country to greater heights of progress."

Also, King Mohammed VI of the Kingdom of Morocco, in a message, described President Buhari's victory as an affirmation of the level of confidence Nigerians had in their president.

Mohammed promised to work with President Buhari to advance the interests of both countries.

"Your re-election is a testimony to the level of confidence that you enjoy among the people of Nigeria, attributable to your wisdom, experience in politics, sense of engagement and devotion to the service and the protection of the interests of the country especially as they relate to the prosperity, wellbeing and security of your people." King Mohammed VI said in his congratulatory message.

The monarch expressed satisfaction with the existing cordial and fraternal African relationship linking the two leaders, their people, and nations.

He reiterated his determination to work in concert with President Buhari to reinforce the mutually beneficial relationship between Morocco and Nigeria and to give it a new impetus to serve as a model on the African continent.

On his part, President Alpha Conde of Guinea described the re-election of President Buhari as a dose of hope for the West African region.

He expressed confidence that the cordial relations between Nigeria and Guinea would continue to get better.

Earlier, President Mahamadou Issoufou of Niger, who was the first leader to call President Buhari minutes after INEC declared him the winner of the 2019 presidential elections, said he looked forward to working with the Nigerian leader to further strengthen Nigeria-Niger relations.

Other world leaders who sent congratulatory messages are Presidents Nana Koffi-Addo of Ghana and Macky Sall of Senegal.

Previous Story
Nigerians Want Buhari to Focus On Economy, Jobs - Survey
Next Story
We Are Not Bothered By Atiku's Threat to Go to Court - Presidency

Buhari and the Challenges a Second Term in Nigeria Brings
Tagged:
Copyright © 2019 This Day. All rights reserved. Distributed by AllAfrica Global Media (allAfrica.com). To contact the copyright holder directly for corrections — or for permission to republish or make other authorized use of this material, click here.