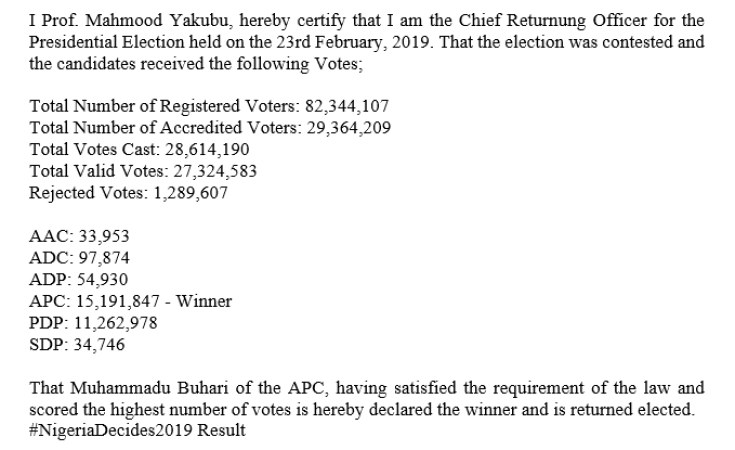 The just-concluded presidential election which gave the incumbent, President Muhammadu Buhari, a second term mandate sprung surprises especially with the scores polled by some smaller parties.

The APC clinched power from the opposition PDP in 2015 after a keenly contested poll that saw the then incumbent, Goodluck Jonathan, conceding defeat to Mr Buhari even before the final vote tally. It was the first time in Nigeria's history that an opposition party would unseat a ruling one.

The 2019 presidential election was equally hotly coo steered across the regions. The PDP candidate, Atiku Abubakar, who came second has rejected the outcome of the polls and has said he will be heading to court.

It was surprising for many that parties like the Social Democratic Party (SDP), Alliance for New Nigeria (ANN), and Young Progressives Congress (YPP) who had promising and prominent candidates did not get more votes.

The APC polled the highest votes making it the winner, followed by its main challenger the PDP.

The third party with the highest votes, PCP, came as a surprise seeing its campaign activities before the election were negligible.

Some have humorously said voters may have 'erroneously' thumb printed the slot for the PCP because the party's slot is just before the PDP on the ballot.

Below is a list of the parties and their scores.

Atiku Not Destined to Be Nigeria's President - Oshiomhole

Atiku Keeps Promise on Challenging Nigeria Election Results
Tagged:
Copyright © 2019 Premium Times. All rights reserved. Distributed by AllAfrica Global Media (allAfrica.com). To contact the copyright holder directly for corrections — or for permission to republish or make other authorized use of this material, click here.