Marelize Horn, 19, the Namibian woman who rode her bicycle into rugby poles in a video that has been going viral, has described herself as "'n ongeluksvoël" (accident prone) who falls down almost every day.

"My mum Heidi says: 'My fok, Marelize' to me almost every day! I fall off things, walk into things - it's insane," Marelize told News24 on Friday.

Horn expressed shock at the huge reaction to the video. "I am in shock! I keep calling my mother to ask her if this is all a dream!"

According to her, the reaction has been overwhelming. "There is already a T-shirt with the phrase available!"

On Saturday at around 10:30, Horn was practising riding a bicycle at Affies Park in Windhoek. "I know this sounds strange, but I am finally learning to ride the bicycle at the age of 19."

She says she and her mum chose to ride on the sports grounds because, if she fell, she would not hurt herself too badly on the lush lawn.

"My mum made a video of me riding so that we could watch it afterward to pick up on any mistakes that I made."

According to Horn, she was riding along nicely until she started to approach the rugby poles.

"I wanted to turn right but the bike just kept going to the left. I had no control over the thing. I then crashed into the pole."

Although she was bruised "all over", she told News24 she was not badly injured and had taken to riding the bicycle again.

"I actually have many videos where I ride the bicycle perfectly," she said.

Apart from the now famous phrase "My fok, Marelize", Heidi's first response after the fall was, "Is the bike okay?"

Marelize says it was a borrowed bicycle and Heidi was concerned about possible damage.

"The main reason for learning to ride the bicycle is because I will be moving to the Netherlands later this year to work as an au pair, so I will need to get around."

For now, Horn is fielding calls from radio stations and other media after becoming an overnight sensation.

"It's unbelievable - it's almost too much to take in," Horn told News24. 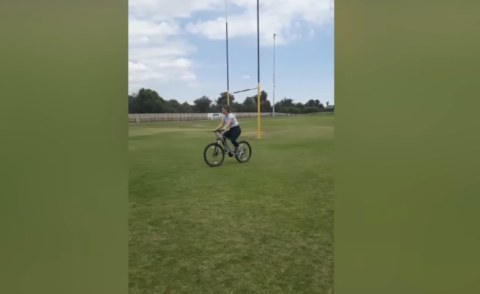 Watch: Namibian Woman's Bicycle Ride Has Everyone Laughing!
Tagged:
Copyright © 2019 News24Wire. All rights reserved. Distributed by AllAfrica Global Media (allAfrica.com). To contact the copyright holder directly for corrections — or for permission to republish or make other authorized use of this material, click here.