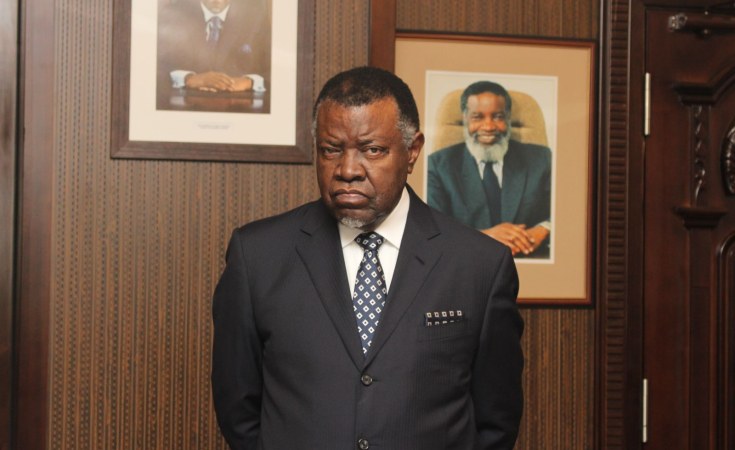 The head of state made the remarks at the handover of the late kaptein Hendrik (!Nanseb) Witbooi's Bible and whip to his clan at Gibeon yesterday.

The artefacts were repatriated to Namibia from Germany on Tuesday.

Before delivering his message, Geingob said he had prepared a tough speech, but had toned it down after the German minister of science, research and arts Theresia Bauer admitted her country's role in the atrocities committed against the Nama and Ovaherero people.

"Something terrible has happened, and they ought to have apologised... if something bad has happened, then you must heal the wounds," the president said.

Geingob added that Namibia would accept an apology issued by Germany.

The head of state called on Namibians to honour the memory of the late kaptein Witbooi by holding hands under the banner of unity.

In her message, Bauer said: "We cannot ignore atrocities perpetrated by the colonial troops. We acknowledge the atrocities, and are regretful and deeply sorry."

She described as a "deeply moving moment" the symbolic handing over of the artefacts to the Witbooi clan.

"The return of the artefacts has ignited controversy and debate in both Germany and Namibia," she stated.

According to Bauer, the occasion is emotional because it was not only about the return of the artefacts, but for the descendants of the late Witbooi to remember him as their hero.

"We should have acknowledged the wrongdoing far too long ago," she added, referencing the genocide in Namibia.

"We cannot undo the suffering of the people," she said, adding that the return of the late !Nanseb's artefacts was done out of respect.

Bauer said she was "deeply sorry," and pledged that the return of the artefacts is "not the end, but the beginning".

Elizabeth Kock, one of the three elders of the Witbooi royal house who received the artefacts on behalf of the clan, thanked both the Namibian and German governments for the return of her grandfather's heirlooms.

However, Kock wanted to know whether there are still other heirlooms which belong to the Witbooi clan in Germany.

"We have been impoverished, injured, and we have nothing left," she stressed, referring to atrocities committed against the Nama and Ovaherero people.

The Witbooi royal house's elders handed over the whip and the original Bible to the education ministry. The clan, however, kept a copy of the Bible.

Namibia Rejects Germany's Genocide 'Reparations Offer'
Tagged:
Copyright © 2019 The Namibian. All rights reserved. Distributed by AllAfrica Global Media (allAfrica.com). To contact the copyright holder directly for corrections — or for permission to republish or make other authorized use of this material, click here.