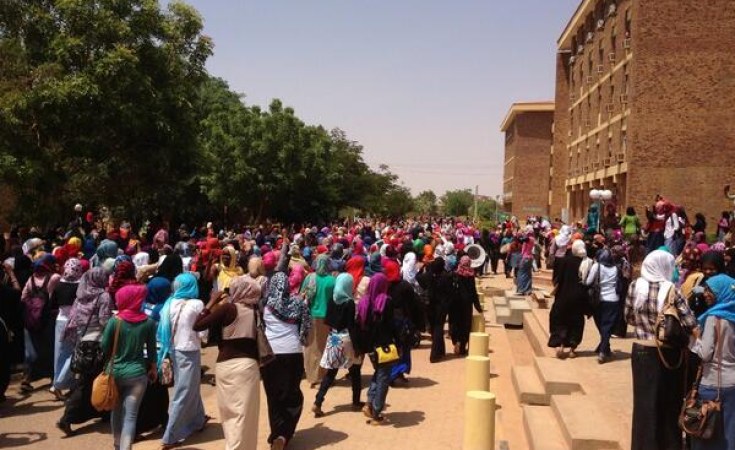 Khartoum / Omdurman / Northern / El Gedaref — Yesterday, the Sudanese uprising against President Omar Al Bashir continued in the states and in districts of the capital city, in conjunction with the announced 'rejection marches' against the State of Emergency and demanding Al Bashir and his regime to immediately step down from power.

People in as much as twelve districts of the capital city Khartoum gathered and held protests and marches, chanting slogans defying the State of Emergency. Several of these demonstrations were attacked by the security forces with tear gas.

Witnesses told Radio Dabanga that security troops stormed Burri in Khartoum with a force of more than 40 vehicles belonging to the National Intelligence and Security Service (NISS), and launched an offensive against the demonstrators. The NISS officers fired tear gas and stormed a number of houses.

Thousands of peaceful protestors took part in more than eight demonstrations in the districts of Khartoum's twin-city Omdurman. Members of the security forces arrested a large number of demonstrators in Omdurman and dispersed the demonstrations with violence.

Additionally, security forces stormed dozens of shops on Omdurman to chase fleeing protesters, according to a witness speaking to Radio Dabanga.

In Khartoum North, the districts of El Haj Yousef, Shambat, El Khatmiya and El Mazad witnessed similar protests. Eye-witnesses told Radio Dabanga that the demonstrations in Shambat continued for many hours on Thursday, as the demonstrators managed to close the main roads in El Khatmiya by setting tires on fire.

Protests in the states

People went out in mass demonstrations in villages and districts of El Gezira, Sennar and Kassala states. On Thursday, doctors and medical staff jointly participated in three vigils in Khartoum, Northern State and El Gedaref state in conjunction with the declared rejection march across Sudan.

Doctors at El Birgeig hospital in the Northern state and El Gedaref hospital in eastern Sudan carried out protest vigils demanding the overthrow of the regime, denouncing the State of Emergency and the suppression of the peaceful demonstrators.

Pharmacists working in pharmaceutical companies also held a sit-in to reject the government's policies in the pharmaceutical sector and demand the immediate departure of the regime.

The actions by doctors follows earlier protests on Tuesday, when hundreds of doctors and medical staff carried out more than 18 protests in Khartoum and El Gezira, as well as hospitals in El Fasher, Atbara, Kassala, Port Sudan, and areas under the control of the rebel SPLM in South Kordofan.

On Thursday morning, members of the National Intelligence and Security Service (NISS) launched a large-scale detention campaign in Abri in Northern state in anticipation of the marches in the country called for by the signatories of the Declaration of Freedom and Change.

Activists told Radio Dabanga from Abri that the force that carried out the arrests consisted of dozens of NISS agents in six Land Cruisers. They pointed that they continued to roam the town until late on Wednesday.

Nationwide protests have continued since the first demonstrations erupted mid-December, calling on the regime of Al Bashir to step down following the endemic economic crisis that includes a hike in bread, fuel and medicine prices.

Africa's Strongmen and the Dying Art of Fine Dictatorship

Nigeria Is Third Most Terrorised Country In The World - Report
Labour