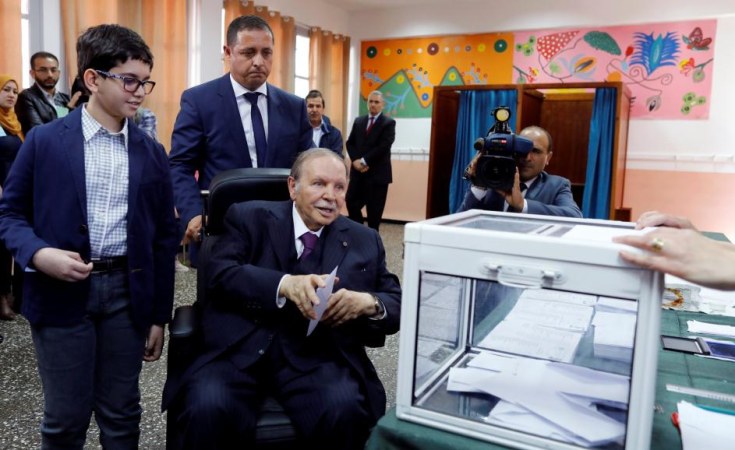 Algerian President Abdelaziz Bouteflika is facing unprecedented protests as he prepares to stand for a fifth term in April elections. Opponents say the ailing 82-year-old is unfit for office.

Algerian President Abdelaziz Bouteflikacelebrated his 82nd birthday from a medical center in Switzerland on Saturday, the day before his further bid for the presidency is formally presented to the Constitutional Council on Sunday.

But since announcing his candidacy last month, a series of rare, and huge, demonstrations have been held across the country to protest his bid for a fifth term and put Bouteflika's campaign on the back foot.

Friday's demonstrations were the largest so far. There were scuffles near the presidential palace in the capital Algiers. The security forces were largely passive, allowing the main protests to take place. Algiers was quiet on Saturday.

Bouteflika's campaign office said on Saturday the man who had led the last three election campaigns, former prime minister Abdelmalek Sellal, had been fired, just hours before the deadline for submitting Bouteflika's candidacy. In his place, transport minister Abdelghani Zaalane is to lead the election bid for the president.

Algeria has been run by the same group of veterans since the 1954-1962 independence war with colonial power France. Bouteflika has ruled since 1999 and stamped out a decade-long rebellion early in his rule.

Bouteflika's opponents say he is just too old and too sick to lead the country, with many claiming it is a humiliation for Algeria to be ruled by someone so infirm.

Others allege Algeria is being ruled in his name by advisers, including his brother and an army general. Since a stroke in 2013 Bouteflika has rarely appeared in public. However, there is no legal requirement for candidates to be in the country to submit their candidacy for the April 18 vote.

The socialist National Liberation Front (FLN) was the principal nationalist movement during the war and the sole party until 1989 when others were legalized. It picked Bouteflika as its candidate and a number of other parties, trade unions and business groups have endorsed him. This makes it difficult for opposition groups to mount a challenge.

The men expected to register to campaign against him are former Prime Minister Ali Benflis, retired General Ali Ghediri, and the leader of a moderate Islamist party, Abderazak Makri.

A range of problems

In recent years, the country's finances have been weakened by low oil prices, forcing cuts in state subsidies.

Algeria's Western allies are concerned about an unstable transfer of power in a country on Europe's doorstep.

The country faces al-Qaida linked militants in the Sahel, turbulence in neighboring Libya and is a potential gateway for migrants seeking to reach Europe.

'If I Win I Will Step Down' - Algeria's President Bouteflika
Tagged:
Copyright © 2019 Deutsche Welle. All rights reserved. Distributed by AllAfrica Global Media (allAfrica.com). To contact the copyright holder directly for corrections — or for permission to republish or make other authorized use of this material, click here.