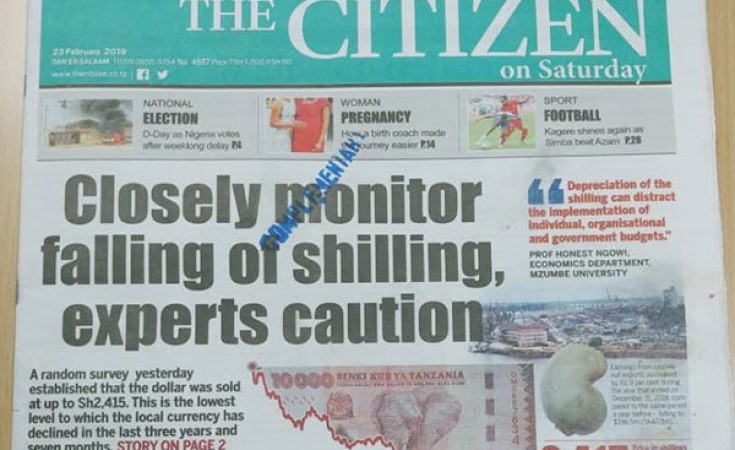 THE government has clarified facts behind a sevenday suspension of an English tabloid, 'The Citizen' in response to criticism advanced by some critics on the action taken.

Speaking to 'Sunday News' in an interview yesterday, Director of Tanzania Information Services Department and Chief Government Spokesperson, Dr Hassan Abbas, said the decision to impose the suspension on the newspaper was reached after thoroughly examining various stories published by the newspaper.

He said analysis made on some stories established beyond reasonable doubt that a number of them were maliciously misleading and one sided, largely violating media ethics and licence conditions.

Giving examples of such stories, Dr Abbas said on July 22, last year, the tabloid published an article entitled "US Senator Raises Alarm on Tanzania" that quoted an American politician giving an opinion on some of the alleged human rights and democracy concerns in Tanzania.

The analysis made on the story showed the writer of the article did not observe the cardinal principles of journalism that, among other issues, required an author to balance the story by giving the relevant local authorities an opportunity to respond to the Senator's allegations.

Having noticed the professional blunder, Dr Abbas said, the government wrote to task the tabloid to comply with media ethics with the management promising to improve.

But, before the dust settled down, the same tabloid in December last year published another article, citing what was purported to be an alert from the US government that listed Tanzania among the countries where US citizens were required to be cautious due to terrorist threats.

Dr Abbas said since the story was not balanced by giving the local authorities space to respond, a few days later the US Embassy officials in the country registered their concern to the Ministry of Foreign Affairs and East African Cooperation, explaining that the story resulted from an outdated alert that was not updated. The tabloid management apologised for the story.

As if that was not enough, Dr Abbas said on January 23 'The Citizen' deliberately published a misleading story claimed that the value of the local currency (Tanzanian shilling) had fallen significantly compared to three years ago.

In total violation of professional principles, the story cited unnamed sources from a bureaux de change and some economists without consulting the Bank of Tanzania (BoT), the authority mandated to regulate exchange rates.

He said in the pursuit of the principle of natural justice on February 23, 2019, editors were given the right to be heard as per Regulation 27(1)(a) of the Media Services Regulations, 2017 by being served with a three-day notice to explain why legal measures should not been taken against them for the violation of the cardinal principles of journalism and laws.

Dr Abbas said the editors of the tabloid responded in writing and apologised for the errors. "Despite the Media Services Act, No 12, 2016 giving an opportunity to the suspended outlet under section 10(1) to appeal to the Minister of Information if dissatisfied by the decision of the Director of Information Services, the editors of 'The Citizen' have not invoked the section to date."

Responding to criticisms advanced by some individuals on the measures that had been taken Dr Abbas made it clear that the suspension imposed on 'The Citizen' was not based on its criticism of the government.

"Criticism is allowed in Tanzania under section 52(2) of the Newspapers Act, where any person is allowed to criticise if the government has been misled on a policy or implementation issue or to point out errors or defects," he pointed out.

To give more examples, Dr Abbas said on February 19, 2019 the government cancelled the licence of TUNATEKELEZA Newspaper for professional misconduct.

He said despite the newspaper being positive to the government and pro-President Magufuli administration, the government moved to protect professionalism.

"It should be noted that the government compels the media to comply with international, regional as well as local ethical and legal standards by, among others, striving to be fair and objective in their reporting," Dr Abbas insisted.

He said the government had allowed more than 200 newspapers and magazines, about 160 radio stations and more than 40 TV stations, making it one of the world's highest countries on media concentration.

He insisted that despite misinterpretations by some critics on the measures taken the government would continue providing an enabling environment for the responsible press to flourish, emphasising that sensational media would continue to be discouraged to encourage citizens' right to reliable and balanced news of the day. 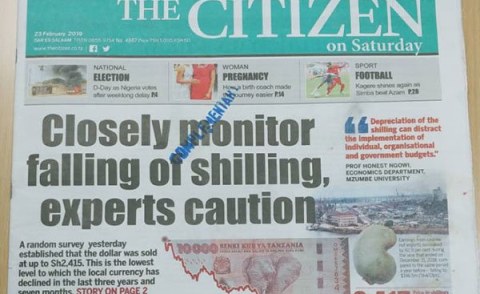 Govt Bans Tanzania's Citizen Newspaper in Latest Media Crackdown
Tagged:
Copyright © 2019 Tanzania Daily News. All rights reserved. Distributed by AllAfrica Global Media (allAfrica.com). To contact the copyright holder directly for corrections — or for permission to republish or make other authorized use of this material, click here.