Algeria: Protests in Paris and Algiers Against Bouteflika's Fifth Mandate 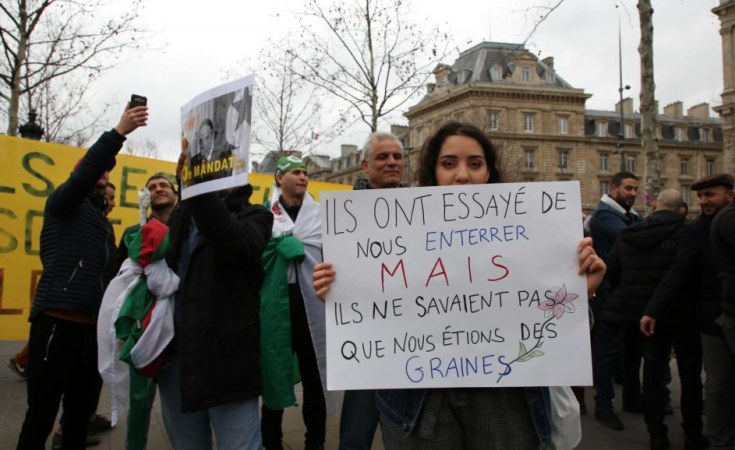 Protests in Algiers and Paris continued against a fifth presidential bid by Algeria's octogenarian Abdulaziz Bouteflika, ahead of a Sunday deadline for candidates to put in their names.

Two cities. Two protests. Each with very different atmospheres, but both for the same cause: to call on Bouteflika to step down.

In central Paris, at the Place de la Republique; thousands of Algerians living in France are united by their disdain for Bouteflika's plans to run for a fifth presidential mandate.

There is music and singing. People of all generations and walks of life rub shoulders as the crowd swells.

One of the organisers of today's protest in Paris, Salah Hadjab, came to live in France 16 years ago. He is flanked by his two young sons who were born in France but travel regularly to Algeria.

"Algerians in France are tired of living in exile. We want to be able to live and work in Algeria. We can't because of the Bouteflika mafia," laments Hadjab.

New protests broke out in the Algerian capital on Sunday against a fifth term for ailing President Abdelaziz Bouteflika who faced a midnight deadline to register for April elections.

Chanting "Bouteflika go away", dozens of students rallied in the city centre of Algiers cordoned off by police, AFP journalists said, as similar protests were reported across the country.

Bouteflika's announcement in February that he would seek another term despite his failing health has unleashed angry protests.

The 82-year-old, who uses a wheelchair and has rarely been seen in public since a 2013 stroke, has remained invisible and silent on the demonstrations since they broke out last month.

Adding to concerns about his fitness for office, the president flew to Switzerland a week ago for what his office described as "routine medical checks".

Sellal was removed ahead of a deadline of midnight (2300 GMT) Sunday for contenders to register for the presidential race, and replaced as campaign manager by Transport Minister Abdelghani Zaalene.

There are no legal requirements for candidates to be physically present to submit their bid to the constitutional council, but in 2014 Bouteflika registered in person.

Police deployed massively around the council's headquarters in Algiers on Sunday and the road leading to it was blocked, while journalists seeking to cover the arrival of candidates were locked in a room.

In the run-up to the deadline six candidates had registered, including prominent retired general Ali Ghediri, while businessman Rachid Nekkaz, who has cultivated a mass following among young people, said he would follow suit on Sunday afternoon.

Protesters to be 'disappointed'

An analyst who declined to be identified said Sellal's sacking could be a tactic to calm the growing protest movement against Bouteflika's bid for a fifth term.

An editorial Sunday in El-Mouhajid newspaper, a mouthpiece of the government, suggested that Bouteflika would not pull out of the race under pressure from the street, saying protesters will be "disappointed".

The sacking came after days of protests that have seen Algerians, including lawyers and students, take to the streets of several cities, including Algiers where protests have been banned since 2001.

The first rally against Bouteflika's bid for re-election drew tens of thousands on February 22 with protesters chanting mostly "No fifth mandate".

The scale of the protests has surprised many in Algeria and represents the biggest challenge in years to the authorities.

On Friday tens of thousands of Algerians were back on the streets in the capital, second city Oran and other towns across the North African country.

During the protests in Algiers clashes erupted between police and protesters when some of them tried to march on the Government Palace which houses the prime minister's office.

Riot police fired tear gas at the protesters, used batons to keep them at bay and also threw at them stones which the demonstrators had initially hurled at the offices, AFP reporters said.

According to a police toll, 56 police officers and seven demonstrators were hurt and 45 arrests made in Algiers.

Bouteflika, who has been in power for two decades, gained respect from many for his role in ending a civil war in the 1990s which, according to official figures, killed nearly 200,000 people.

Officials have warned that the protests risk dragging Algeria into instability, with the prime minister comparing the rallies to those that sparked Syria's war.

Protesters have been mobilised by calls on social media which have resonated with young Algerians, many of whom struggle for employment in a country where half the population is under 30.

Reporters at state radio have complained that their bosses have imposed a blackout on coverage of the protests, and last week journalists also took to the streets to protest against alleged censorship.

Why France is Silent On Algeria's Political Crisis
Tagged:
Copyright © 2019 Radio France Internationale. All rights reserved. Distributed by AllAfrica Global Media (allAfrica.com). To contact the copyright holder directly for corrections — or for permission to republish or make other authorized use of this material, click here.