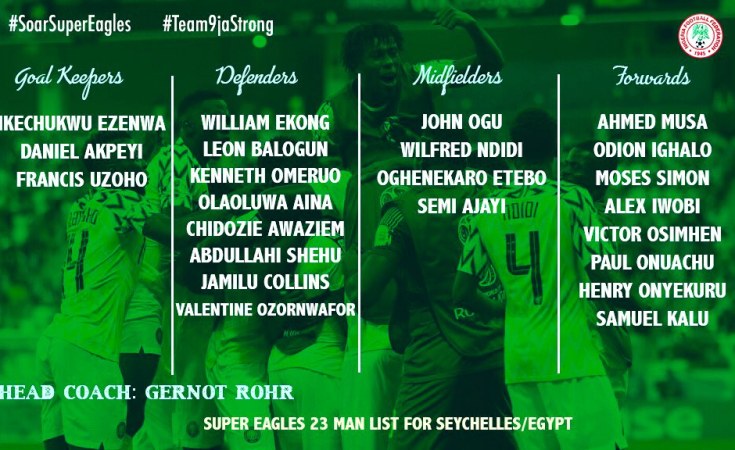 Super Eagles' Technical Adviser, Gernot Rohr has invited stand-in captain Ahmed Musa and 22 other players for this month's Africa Cup of Nations qualifier against the Pirates of Seychelles and the friendly against Egypt's Pharaohs, both taking place in Asaba, Delta State.

The three-time African champions confront Seychelles in a largely-ceremonial session at the Stephen Keshi Stadium on Friday, 22nd March, starting from 4pm, and then tackle the Pharaohs of Egypt at the same venue in a prestige international friendly four days later.

All invited players, alongside technical and backroom crew, are to report in the Delta State capital on Monday, 18th March 2019.

Super Eagles Camp Opens Ahead of Seychelles, Egypt Matches
Tagged:
Copyright © 2019 Daily Trust. All rights reserved. Distributed by AllAfrica Global Media (allAfrica.com). To contact the copyright holder directly for corrections — or for permission to republish or make other authorized use of this material, click here.