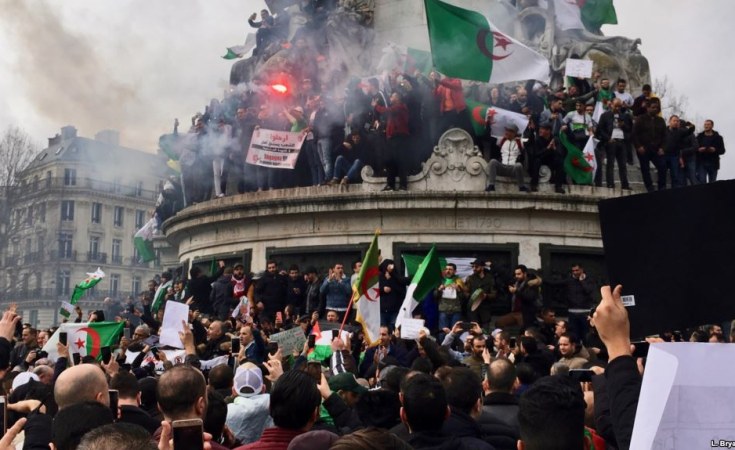 Lisa Bryant /VOA
Algerians climbed on the iconic Marianne statue in downtown Paris as the protest against Bouteflika's intention to seeka another term in office.
Voice of America (Washington, DC)
By Lisa Bryant

In recent weeks, French President Emmanuel Macron has spoken out forcefully in favor of the European Union and Venezuela’s opposition protests. He has dominated town hall meetings to address grievances at home, and sought stronger ties in China.

But when it comes to addressing the political crisis roiling former French colony Algeria, just across the Mediterranean, the normally loquacious Macron and his government have been remarkably silent.

After ailing Algerian President Abdelaziz Bouteflika, 82, announced a controversial re-election bid on Sunday, the Elysee presidential palace issued only a brief statement, blandly expressing support for a vote “under good conditions,” and Algerians’ right to freely choose their government.

“We’re not going to comment on what’s happening,” Agriculture Minister Didier Guillaume said on French radio, echoing other members of Macron’s ruling La Republique en Marche Party. “I see the enormous demonstrations on the streets of Algiers … but as a member of the French government, I shouldn’t be commenting.”

But today, some are calling on Paris to do just that and side with the Algerian street.

“The French government will be very prudent” as it wonders whether Algeria’s ruling party, in power since independence, will topple or be “reborn from its ashes,” said Sciences-Po University North Africa expert Khadija Mohsen-Finan.

She added of Macron, “one cannot hide behind arguments of noninterference by a foreign country. The president needs to emerge from his silence and say things clearly.”

Other observers warn such a step could undermine France’s delicate but strategic relationship with the Bouteflika regime, and that key French priorities —from curbing migration and terrorism in the Sahel, to Algerian gas exports to France — risk being compromised if the North African country tips into turmoil.

“President Macron faces an impossible equation” between supporting pro-democracy protesters or a regime France counts as an ally in fighting terrorism, historian Benjamin Stora said in a radio interview. “A destabilization of Algeria would open the door to a political unknown.”

France’s rocky history with Algeria partly helps to explain its hands-off stance today. Successive French leaders have refused to formally apologize for decades of occupation, which ended only in 1962, after Algeria’s bloody and protracted revolution. That includes Macron, despite controversially calling French colonialism a “crime against humanity” as a presidential candidate.

Paris also kept a low profile during Algeria’s brutal civil war in the 1990s, which pitted the country’s military-backed government against an Islamist opposition.

That did not stop Paris from being targeted by Algeria’s Armed Islamic Group (GIA), who blamed Paris for siding with Algiers. In the early 1990s, the militants killed French expatriates, hijacked an Air France plane, and launched several terrorist attacks in Paris.

Under Macron, France has tried to forge closer economic and security ties with its former colony. Visiting Algiers in late 2017, the president called for opening a "new chapter" with Algeria, and urged young Algerians to look to the future.

“There are so many ties that unite us — history, shared memory, the Algerian community here. It’s completely normal that they should be attentive of what happens in Algeria,” Algeria’s ambassador to France Abdelkader Mesdoua told C-TV of Macron’s government. However, the ambassador also pointed to French statements about respecting Algerian sovereignty.

While the past looms large in bilateral ties, Algeria today is considered a key ally in battling Islamist groups in the Sahel, where France deploys more than 4,000 troops. Some French also consider it a bulwark against mass migration to Europe.

“The aspirations of Algeria’s youth are completely legitimate,” said Jordan Bardela, senior member of the far-right National Rally Party in remarks on French TV, even as he warned that instability in Algeria could unleash “immigration without precedent” from sub-Saharan Africa and by Algerian youth — an assessment experts say is overblown.

Yet among Algeria’s sizable diaspora here, some are calling for a stronger French response.

“France needs to help the Algerian people liberate themselves from these mafia,” Djamel Maiedinne, who joined Algerians demonstrating against Bouteflika and his government in Paris on Sunday. “The French government needs to understand that we’re millions, not thousands.”

Another demonstrator, Yasmine Bouaouiche, blamed French authorities for propping up what she considers a repressive regime for decades. “The French government needs to cut the cord,” she said.

Some media have also waded into the debate. An editorial by Europe 1 radio criticized Macron’s noncommittal stance as motivated by a misplaced fear of Islamists coming to power in Algeria, and posing a potential security threat to Europe.

“History shows that military powers nourish Islamism,” the editorial added, citing the case of Libya and Egypt “and Algeria also.”

But other analysts believe French authorities are truly caught in a bind.

“If France supports the street, it would be considered meddling. If it supports the (Algerian) power, it would be seen as foreign interference,” political scientist Naoufel Brahimi El Mili told French radio. “In both cases, France can’t do anything but offer a deafening silence.”

Why France Has Kept Silent On Algeria's Political Crisis

Algeria's Bouteflika in 'Life-Threatening' Condition - Report
Tagged:
Copyright © 2019 Voice of America. All rights reserved. Distributed by AllAfrica Global Media (allAfrica.com). To contact the copyright holder directly for corrections — or for permission to republish or make other authorized use of this material, click here.