Kenya: Flights Disrupted at JKIA in Nairobi as Workers Strike 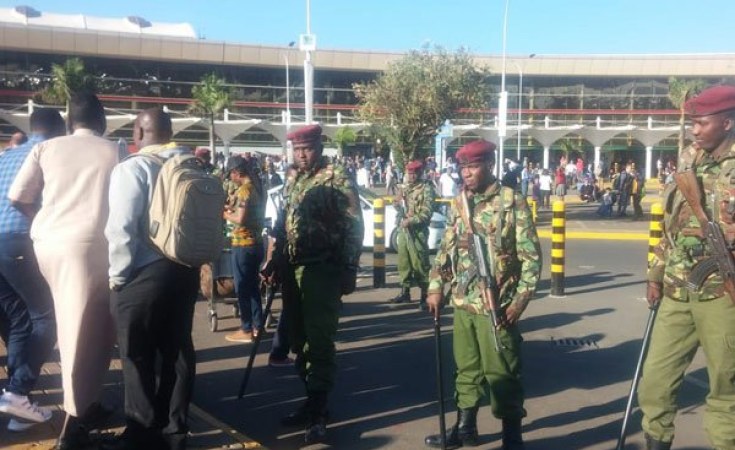 Jeff Angote/Daily Nation
There is a heavy police deployment at the airport.
The Nation (Nairobi)
By Harry Misiko and Walter Menya

Flights have been disrupted at Jomo Kenyatta International Airport in Nairobi after aviation workers went on strike.

The striking staff, who downed their tools in the small hours of Wednesday, are unhappy with the board of management, unfair staff hiring and compensation and proposed takeover of the airport by Kenya Airways.

No plane has landed at the largest airport in Kenya and East Africa since 3am, with a Rwanda Air plane that was supposed to pick up passengers leaving empty.

By 8am, tens of flights into and out of the airport had also been hit by the job boycott that is threatening to paralyse air transport in the country.

The flight schedule on the Kenya Airports Authority website showed that at least six inbound flights, which were set to land between 1.55am and 6.59am, were still marked 'scheduled'.

Similarly, at least 26 outbound flights were still marked scheduled several hours after they should have departed.

For instance, flight AF5191 to Amsterdam Schiphol, which was scheduled to depart at 2.59am, was still marked 'scheduled' by 8am.

Long queues have formed at the airport's gates, with some sources telling the Nation that some of the airport's entry points had been closed by the workers on go-slow, prompting a heavy deployment of police.

Fire engines have also been withdrawn from some runways, with planes that were supposed to leave the East African aviation hub remaining grounded.

Hundreds of passengers are stranded at the airport after their flights were delayed or rescheduled, with many taking to social media to vent their frustration.

"We are stranded at JKIA since 3am. All flights grounded," Kimany Kiongo posted on Twitter.

"Been here since 3am... no entry into the terminal at #JKIA due to strike action," Nambi Sharon tweeted.

In a Twitter post, Kenya Airways advised some of its customers not to come to the airport in a bid to ease the chaos.

"Further to the strike by Kawu members, we expect disruptions on flights. Customers on flights after 11am are advised not to come to the airport until further communication is shared," KQ tweeted.

The Kenya Aviation Workers Union (Kawu) has questioned the proposed merger of the loss-making airline and the Kenya Aviation Authority (KAA), a plan that has since been halted by Parliament.

Essentially, Kawu boasts of a membership that is also very critical to the security and smooth running of the airports in the country.

Kawu is demanding the removal from office of KAA Chief Executive Johnny Andersen and chairman of the board Isaac Awuondo and their KQ counterparts.

The union has questioned how the national carrier's CEO Sebastian Mikosz, board chairman Michael Joseph and a team of managers and consultants were allegedly paid a whopping Ksh1.3 billion ($13 million) in 18 months.

They want the KQ and KAA managers and directors to be shown the door.

"It is only then that workers in this industry will have the confidence that the issues affecting them will be addressed," Kawu secretary-general Moses Ndiema said.

KAA had on Tuesday, in a media advisory, assured travellers that flights would not be disrupted.

"The strike notice dated February 27, 2019, by Kenya Aviation Workers Union stands suspended following issuance of an order of injunction by the Employment and Labour Relations court on March 5, 2019. We wish to assure the general public of normal operations at all our airports," KAA said.

A similar message had also been posted online by the national flag carrier, Kenya Airways which had assured its customers of "normal operations" after the court ruling.

But they were in for a rude shock when Kawu pressed ahead with the strike despite the court order, a move that is threatening to ground all aviation operations in Kenya.