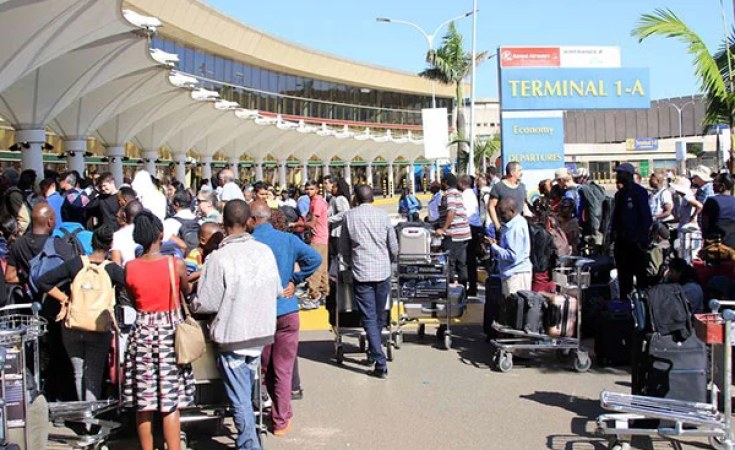 The strike saw airlines and operators lose billions of shillings after dozens of flights were cancelled or rescheduled, creating an operational nightmare.

The airline saw 24 flights out of its main hub affected, and it struggled by evening to fly out stranded passengers.

Airport personnel were protesting the proposed merger between the national carrier and the airports regulator, which, if approved, will see KQ run the facility in a concession agreement with the Kenya Airports Authority (KAA).

The country's main aviation hub also handles an average of 230 flights daily, with close to 114 of them departing either for domestic, regional or international destinations.

"The financial impact created by this illegal action is substantial. We are calculating and will advise together with the airlines on the exact cost.

"Cancelled and rescheduled flights come with costs including refunds and hosting passengers, not just here but in other airports whose flights were to terminate in Nairobi. This will cause untold financial burden to airlines," Transport Cabinet Secretary James Macharia told the Daily Nation.

KQ Managing Director Sebastian Mikosz said they were yet to fully calculate the financial costs to the airline, but in court papers filed yesterday morning, the airline put the loss at Sh300 million.

"The strike affected our morning operations, but we now expect things to slowly go back to normal as we strive to clear the backlog starting with the London and Dubai routes," Mr Mikosz said.

For the airline, the international route to London was key to be salvaged mostly because of the stringent European Union Aviation regulations that would require the airline to compensate up to $600 (Sh60,000) per passenger if they were to cancel the service routes for a period of more than 12 hours.

Within the continent, the airline cancelled its Entebbe, Blantyre, Kigali and Dar es Salaam morning flights, which also saw its operations to Lagos, Accra, Abidjan and Dakar affected.

It also saw its inbound flights from Mumbai and Dubai delayed by more than three hours. Passengers booked to fly out on these routes were affected.

"We had the first flight to Amsterdam at 12.30pm, followed by Mumbai and London. We also saw local flights to Kisumu and Mombasa take off," Mr Macharia said.

The Amsterdam, Mumbai and London flights normally all depart between 8.45am and 9.30am. The strike not only affected KQ, but also other carriers that operate from JKIA.

Mr Macharia said they managed to replace more than 30 KAA screeners who had downed their tools with those from KQ and the Kenya Air Force, which allowed them to start processing passengers for departures.

Etihad, Ethiopian, Emirates, RwandAir were some of the flights that saw immediate cancellation in their morning schedules sending their operations into crisis mode.

By evening, the airline had reopened its routes with flights to Entebbe, Cape Town, Johannesburg, Dubai, London, Harare and other regional airlines, including South African Airline that operates two scheduled flights to Johannesburg, and Ethiopian Airlines, flights taking off and landing in the evening, as operations started normalising.