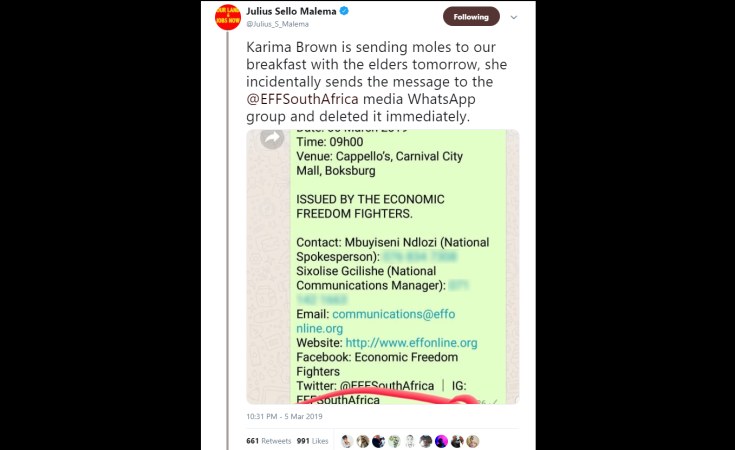 This follows rape and other threats against Brown, allegedly by EFF supporters, as a result of a message she posted on the EFF's WhatsApp group. Brown mistakenly posted an editorial brief meant for journalists, regarding a story about the EFF's "Breakfast with the elderly" function.

She wrote, "Keep an eye out for this. Who are these elders. Are they all male and how are they chosen. Keep watching brief (sic)."

In response, EFF leader Julius Malema tweeted a screenshot of her message with her cellphone number, News24 reported.

He tweeted, "Karima Brown is sending moles to our breakfast with the elders tomorrow, she incidentally sends the message to the @EFFSouthAfrica media WhatsApp group and deleted it immediately."

EFF supporters apparently attacked her, calling her a "whore" and "a bitch" and threatening her with rape.

This followed a statement by the EFF condemning Brown and calling her an ANC operative.

Malema later said that no one should be threatened with rape, but has refused to back down on his comments about Brown.

On Wednesday, the South African National Editors Forum (Sanef) condemned the EFF's attacks on Brown and said this was not the first time that women had been attacked by the party's supporters, News24 reported.

"If the EFF leadership has evidence and/or concerns about Brown or any other member of the media they must deal with this in the correct forum including the Broadcasting Complaints Commission for Radio and Television and online or the Press Ombudsman/Council for Print and Online," Sanef said.

"From a Sanef position there is empirical evidence to show that when senior party leaders and politicians muzzle journalists, their supporters follow in their footsteps."

Sanef has approached the Equality Court in its efforts to stop the EFF's attacks on journalists, especially women.

In a statement on Wednesday, Primedia also condemned the EFF's attacks on Brown. Brown hosts The Karima Brown Show on 702. The station is owned by Primedia.

"Primedia Broadcasting is appalled at the vicious personal attacks against one of its presenters, Karima Brown. 702 has always stood for open debate and the contestation of ideas. We fiercely guard and protect our presenters' and callers' right to freedom of expression as protected in the Constitution and as a signatory to the Broadcasting Complaints Commission of South Africa's (BCCSA) code of Conduct. It is something that we, as 702, will defend.

"The spate of recent attacks on media professionals is not only detestable, it also places undue pressure on those working in the media," the company said in a statement.

It added that, the "threats" were being viewed "in a serious light", especially in the "highly charged environment ahead of the forthcoming elections".

"These threats are being viewed in a serious light as well as being regarded as inflammatory and as a threat to Karima's safety."

COO of Primedia Broadcasting Karl Gostner said: "We appeal for the threats against Karima to stop. It inhibits her and other journalists from doing their work. Attacks of this nature, are a threat to our democratic space."

An Open Letter to the Women of the EFF 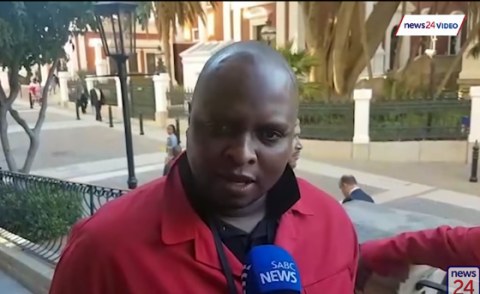 South African Journalist Wins Court Case Against EFF
Tagged:
Copyright © 2019 News24Wire. All rights reserved. Distributed by AllAfrica Global Media (allAfrica.com). To contact the copyright holder directly for corrections — or for permission to republish or make other authorized use of this material, click here.