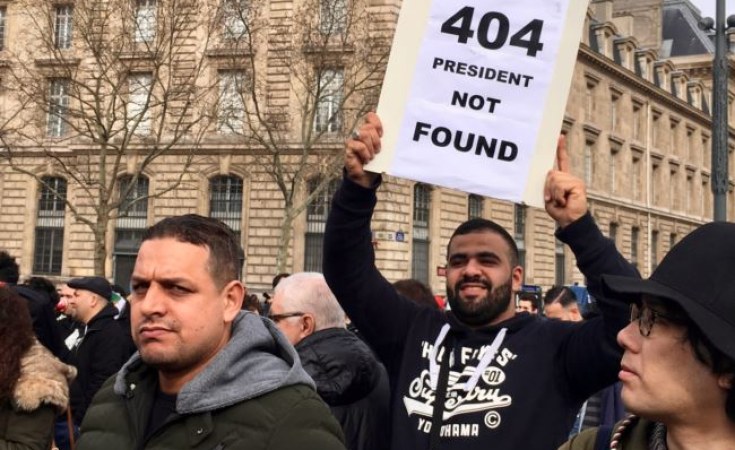 Physicians joined lawyers for protests in Algiers on Thursday against Algerian President Abdelaziz Bouteflika in an effort to find out who approved a medical certificate clearing the 82-year-old to seek a fifth term in office.

Bouteflika has been wheelchair-bound since suffering a stroke in 2013, and is rarely seen in public.

Protests have taken place almost daily since a massive demonstration two weeks ago, and organizers are calling for another one on Friday, despite a ban that has been in effect since 2001.

Bouteflika warned Thursday that instigators may try to infiltrate the demonstrations to provoke turmoil ahead of the April 18 election. "We must call for vigilance and caution in case this peaceful expression is infiltrated by some insidious party ... which could cause chaos," he said.

Bar Association of Algiers member Ahmed Dahim was among the protesters. As fellow demonstrators chanted, "No to the fifth mandate," Dahim told AFP that Bouteflika's candidacy "is inadmissible" because he could not have legitimately obtained the required medical certificate.

For the second consecutive week, dozens of journalists also joined the demonstrations, declaring "pressures" have been exerted on them over their coverage of the protests.

Bouteflika joined a chorus of senior officials in warning of another "national tragedy" after Algeria's decade-long civil war and of the "crises and tragedies caused by terrorism" in neighboring countries.

The North African country has generally avoided the Arab Spring anti-government uprisings that forced rulers in neighboring Libya and Tunisia out of office. But Bouteflika's Feb. 10 announcement to seek another term in office triggered angry reactions, particularly among young people.

Bouteflika, who has been in power for two decades, has promised he would organize a "national conference" to set a date for a future election in which he would not participate.

The Constitutional Council has indicated it would make a final decision on the candidates by March 14.

Algerian 'March of 20 Million' Opposes Fifth Term for Bouteflika
Tagged:
Copyright © 2019 Voice of America. All rights reserved. Distributed by AllAfrica Global Media (allAfrica.com). To contact the copyright holder directly for corrections — or for permission to republish or make other authorized use of this material, click here.