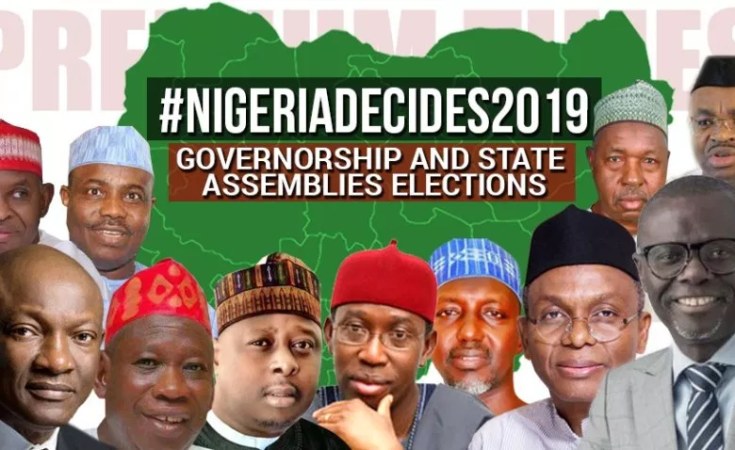 The governor of Kaduna State, Nasir El-Rufai, has thanked people of the state for re-electing him for another four years term.

Mr El-Rufai was declared the winner of the Saturday governorship election by the Independent National Electoral Commission (INEC) having polled a total of 1,045,427 votes.

In a state broadcast Monday evening, Mr El-Rufai thanked Kaduna residents for not only re-electing him but for their support for President Muhammadu Buhari.

The text of the broadcast was shared by his spokesperson, Samuel Aruwan.

"I wish to begin this address with gratitude to Almighty God for His many blessings and protection. Under our Creator's watch, we flawed mortals have conducted largely peaceful elections in this state. The results have now been announced. As you did in 2015, you have again decided to entrust in me the responsibility to lead Kaduna State for another four years. I accept my reelection with gratitude and humility. I thank the people of Kaduna State most profoundly for this vote of confidence in our stewardship.

"I wish to put on record my immense gratitude to you for voting to reelect President Muhammadu Buhari two weeks ago, together with a strong delegation to the National Assembly. It is heartwarming that Zaria Local government gave President Buhari the highest vote in the whole country. On behalf of the people of Kaduna State, we wish the President every success in the second term ."

Before the election, Mr El-Rufai was criticised for his choice of Hadiza Balarabe, a fellow Muslim, as running mate.

Asides this, he was also criticised for his reforms, one of which was the massive retrenchment of teachers in the state.

For winning the election despite these, Mr El-Rufai promised to live up to expectations.

"My fellow citizens, with your votes Kaduna State has made history by electing a woman as Deputy Governor, the first elected in the far north of our country. It is absolutely necessary to put on record my immense appreciation to you for this. You have defied those who do not wish to allow our women to use their talents in all spheres. You have taken a bold step forward to create a much-needed role model for every girl-child in Kaduna State and Northern Nigeria. I assure you that Dr. Hadiza Sabuwa Balarabe and I will work resolutely for the progress of our dear state.

"We campaigned hard for your vote because we do not take you - our people - for granted. This outstanding victory has been achieved because you stood by us. You supported our governance agenda of Putting People First. You embraced our efforts to make lives better by focusing on the things that matter to ordinary people. In difficult circumstances, you saw that we were promoting equality of opportunity, that we were improving schools and hospitals to make lives better for the people, that we were making our state attractive for business.

"How can we not be grateful when you upheld us so strongly when certain forces began resisting our reforms? You stood resolutely by us as we undertook programmes to expand access to Education and Health and to revitalise the public sector.

"This victory is a resounding vote in support of governance reforms. We were threatened with dire electoral consequences because we dared to disengage unqualified teachers, redundant public servants, restructured district administrations and over-bloated local government staff. We were warned that even though we were doing the right things and doing them right, the beneficiaries of our policies - the ordinary citizens of our state will not understand and will vote us out. We never relented, confident that you know that we are working honestly for you. You did not disappoint us. We thank you again."

He called on citizens with different preferences to cooperate with him in moving the state forward while promising not to disappoint.

"In this moment of victory, we acknowledge and respect the preferences of our fellow citizens who did not vote for us. We would listen to their concerns, but we invite them to join hands with us so that we can together build a better Kaduna State. The elections are over, and so should the divisive rhetoric that certain persons and groups chose to inject into the campaigns. It is time to come together and continue the work of rebuilding Kaduna State. Where there has been strife, let us seek calm through accord and conciliation. Where suspicion and ill-will have reigned, let us enthrone goodwill. We can do so much for the good of our state and all its people when we come together.

"We ran for election as APC candidates. But today, we are back to leading Team Kaduna. There is so much to do to make our state stronger, to tackle poverty, to improve health outcomes, to provide decent education to create jobs for our youths, and to secure our communities. Let us do it together.

"We do not have time to exult in our victory. Our duty is to work diligently for our people. We shall not disappoint you. You have invested your hope in us. We shall not deliver despair. It is a new day in our state. Let us work together to make it the start of a better future."