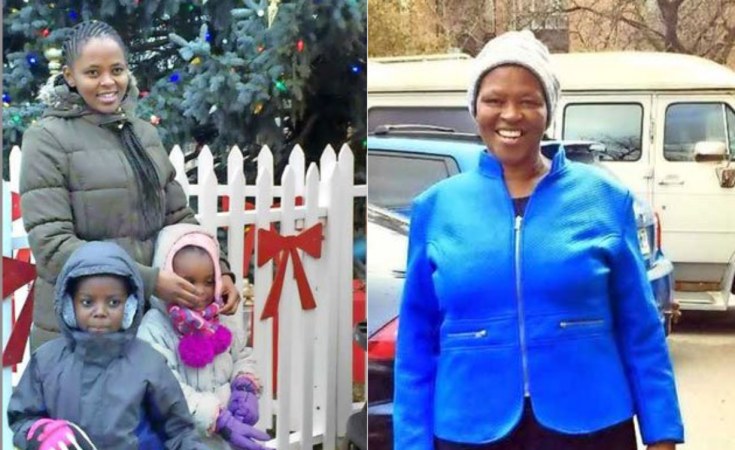 allafrica.com
From left: Carolyne Nduta Karanja and her children Ryan (7) and Kelly (5) and her mother Anne Wangui Karanja. They all died in the plane crash.
The Nation (Nairobi)
By Allan Olingo

Kenya was last evening mourning the death of 32 of its citizens in a plane crash in Ethiopia that claimed all 157 people on board yesterday morning.

A flight tracking site indicated that the plane had shown signs of trouble only two minutes after take-off.

Flight ET302 left Bole International Airport in Addis Ababa at 8:38am for Nairobi. Two minutes into the flight, FlightRadar24, a flight tracking website, reported that the plane's vertical speed was unstable.

The instability persisted for the next three minutes and the plane maintained an altitude of 7,500 feet, with a speed of 600 knots (about 1,100km/h) before the tracking site lost its position at 8:42am.

It is understood that the pilot of the ill-fated Boeing 737 Max 800, Mr Yared Getachew, reported to Ethiopian radar control that he was experiencing technical difficulties with the aircraft after take-off and was cleared to turn back and land at Bole. Mr Getachew was an Ethiopia-born Kenyan.

The plane crashed near the village of Tulu Fara outside Bishoftu, some 60km southeast of Addis Ababa, killing all its passengers, two pilots and six crew members.

It is not yet clear what caused the new aircraft to crash, given that it took off from Bole in good weather, with a pilot visibility of 10km and wind speeds of eight knots (14km/h).

The flight had people from 33 nationalities, with Kenya suffering the largest number of casualties. Canada had 18 and Ethiopia nine, followed by Italy, China, and the United States with eight people each. Britain and France each had seven people on board, Egypt six, the Netherlands five and India four. Four were UN passport-holders. Eleven countries in Africa and 13 in Europe had citizens among the victims.

The crash came on the eve of a major annual assembly in Nairobi of the United Nations Environment Programme (Unep), which learnt of the crash with "deep regret" but could not confirm how many delegates were on the plane.

"The aircraft took off at 8:38am local time from Addis Ababa and lost contact at 08:44am," the airline said in a statement.

An AFP reporter said there was a massive crater at the crash site, with belongings and aeroplane parts scattered widely. Rescue crews retrieved human remains from the wreckage.

"It is too early to speculate the cause of the accident and further investigation will be carried out in collaboration with all stakeholders, including the aircraft manufacturer Boeing, Ethiopian Civil Aviation Authority," the airline's chief executive officer, Mr Tewolde Gebremariam, said.

He described yesterday as a "very sad and tragic day".

Captain Getachew had a cumulative flight time of more than 8,000 hours. He was commanding the flight alongside First Officer Ahmed Nur Mohammod Nur, who had a flight hour record of 200.

The plane had flown from Johannesburg to Addis Ababa, stayed on the ground for three hours, then taken off for Nairobi, said Mr Gebremariam. It had gone through its first major service since delivery in October last year on February 4.

President Uhuru Kenyatta said he was "saddened" by news of the crash. "My prayers go to all the families and associates of those on board," the President said in a message on Twitter.

United Nations secretary-general António Guterres said he was "deeply concerned at the tragic loss of lives" in the crash.

The UN High Commissioner for Refugees Filippo Grandi said the organisation had suffered a huge loss but did not give details of the numbers of staff who perished.

African Union commission chief Moussa Faki Mahamat said he had learnt of the crash "with utter shock and immense sadness", while Ethiopian Prime Minister Abiy Ahmed's office tweeted its "deepest condolences to the families of those that have lost their loved ones".

Mr Mahboub Maalim, executive secretary of the IGAD East African bloc, said the region and the world were in mourning. "I cannot seem to find words comforting enough to the families and friends of those who might have lost their lives in this tragedy," Mr Maalim said in a statement.

The crash was Ethiopian Airlines' third major accident since another take-off disaster -- from Beirut, Lebanon in 2010 -- killed 82 passengers and eight crew members. In 1996, one of its aircraft was hijacked en route from Addis Ababa to Nairobi before it eventually crashed on the shores of the Indian Ocean island of Comoros, killing 125 passengers.

Concerns had been raised over the safety of the Boeing Max 8 after last October's Lion Air crash, which killed all the 190 passengers aboard.

Indonesian and American aviation agencies reported that that plane's abrupt nose-dive could have been caused by updated Boeing software, which ideally is meant to prevent a stall but could potentially send the plane into a fatal fall if the altitude and angle information being fed into its computer system are erroneous.

The Indonesian plane's approximate data on its speed and altitude on the 11 minutes it spent in the air suggested that the first indication of trouble may have come just above 2,000 feet, when its trajectory was beginning to level off.

At that point, something unexpected occurred: Instead of levelling off momentarily, the plane dropped around 600 feet, something that closely mirrors the data from Flight Radar24 on the Ethiopian flight 302, which lost also dropped altitude.

Following the Lion Air accident, pilot unions in the United States claimed that Boeing's update of the flight control system, which can override manual motions, was not explained to pilots, leaving them exposed.

On Sunday, the company said its technical team was prepared to provide technical assistance at the request and under the direction of the US National Transportation Safety Board.

I'm Coming Home, Pilot Told Mother Before Ethiopian Airline Crash
Tagged:
Copyright © 2019 The Nation. All rights reserved. Distributed by AllAfrica Global Media (allAfrica.com). To contact the copyright holder directly for corrections — or for permission to republish or make other authorized use of this material, click here.