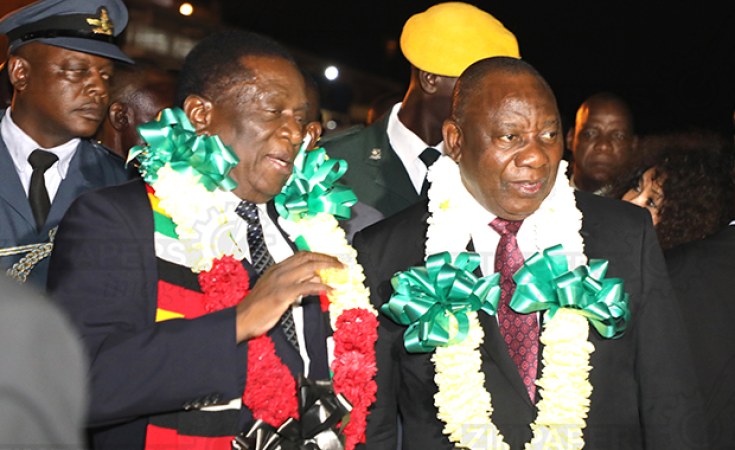 The two leaders who will co-chair today's summit are pro-business and are keen to develop their economies.

The BNC will be co-chaired by Presidents Mnangagwa and Ramaphosa. Zimbabwe and South have signed 45 agreements in previous bilateral engagements cutting across economic, political and social sectors.

More agreements are expected to be sealed today.

"It will blemish our successes if we cannot show progress to our Heads of State and people, year in year out.

"Plausible success has been registered in a number of areas but we must not rest on our laurels hoping that things are going to happen on their own. Delivering concrete results for the benefit of our people remains our paramount objective," he said.

Minister Moyo said the $400 million National Railways of Zimbabwe (NRZ) deal was back on the rails while operationalisation of the One Stop Border Post at Beitbridge will be on the agenda today.

He said local negotiators on the NRZ project met the South African investor, DIDG-Transnet, last month to iron out hurdles impeding the deal.

Government, Minister Moyo said, had given the investor a further six months to implement the deal.

"I am aware that DIDG and its Transnet board of directors recently visited Zimbabwe to testify to the fact that they were committed to seeing the transaction through," he said.

"I am happy to hear that also the Minister of Transport is ready to confirm in writing the commitment of the South African government to the effect that Transnet is forthright and mandated to undertake this project."

On the Beitbridge OSBP, Minister Moyo said modern infrastructure - as espoused in Zimbabwe"s Transitional Stabilisation Programme (TSP) - was a prerequisite for efficient movement goods and services.

"Refurbishment of this important border post is a key priority project for expanding the north-south corridor," he said.

"The operationalisation of the OSBP will ensure elimination of bottlenecks whose delays are a cause of frustration to travellers and transporters. I trust that our respective officials working on this issues are making progress so that soon we can talk of practical timeframes for the setting up of a One-Stop Border Post."

"South Africa is more determined to continue to expand efforts towards ensuring socio-economic development, prosperity and mutual benefits to our two countries," she said.

"In this regard South Africa would like to take this opportunity to build a solid foundation and a dependable cooperative partnership with Zimbabwe that will take us forward. This BNC is likely to bear fruits than any other time precisely because of the challenges facing us."

She said the growing number of agreements and MoUs between the two countries demonstrated decisiveness and commitment to existing relations.

"It is a depiction of the seriousness and importance we attach to this cooperation between the two sister countries," Minister Sisulu said.

"Our decisiveness to move forward is not premised solely on the long list of MOUs and agreements but on the implementation. That is why we want to make sure we have accountability of all the agreements we have signed," she said.