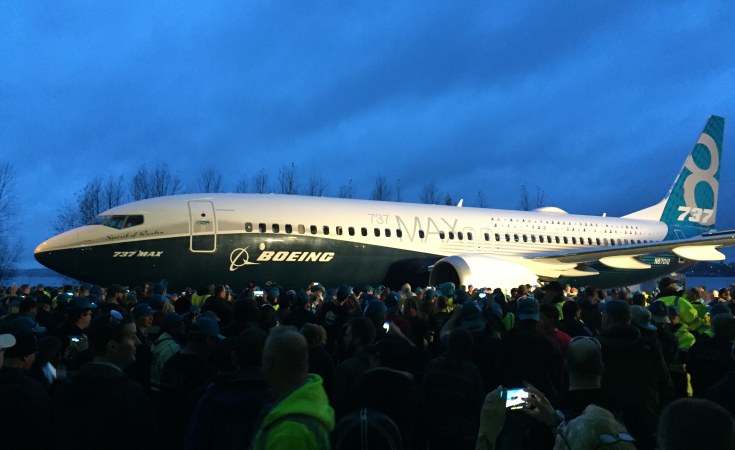 Photo: Aka The Beav / Seattle, Washington
An airliner of the type which crashed soon after take-off from Addis Ababa.
Africa Check (Johannesburg)
analysis

Early on Sunday 10 March 2019, an Ethiopian Airlines Boeing 737 MAX 8 crashed soon after taking off from Addis Ababa's Bole International Airport. All 157 people on board, headed for Kenya's capital city Nairobi, were killed.

Not long after a video appeared on Facebook. It showed the inside of a passenger aircraft and a panicked scene. A baby is heard crying and people are wearing oxygen masks.

Many of those who posted the video claimed it was of the final moments of the Ethiopian Airlines plane. The footage was even made a news story by Sahara Reporters.

But does it really show the moments before the tragedy?

Oxygen masks drop when planes are at high altitude

The aircraft took off at 8:38 am local time and crashed about six minutes later, according to reports. Data from FlightRadar24, published in the Guardian, indicate that the highest altitude it reached was 8,600 feet (about 2,620 metres) above sea level.

Oxygen masks usually descend for passengers to use when the pressure of the cabin falls while the aircraft is at high altitude.

Darren Olivier, a military analyst and the editor of the African Defence Review, told Africa Check that commercial aircraft are pressurised during flight. This pressure is in order to maintain a comfortable and breathable atmosphere when planes are flying at high altitudes such as 30,000 or 40,000 feet. Here, the air outside the plane is simply too thin to support consciousness.

"Oxygen masks deploy automatically based on cabin altitude. For example, for the airbus A320, as far as I know, that altitude is 14,000 feet," Olivier said.

He said "10,000 feet" was "considered a safe altitude where passengers can breathe normally even if the oxygen runs out".

In the six minutes Ethiopian Airlines Boeing 737-800-MAX was in flight, it did not breach this "safe" altitude. It's therefore unlikely that oxygen masks would have been deployed for passengers - as shown in the video.

One aisle or two aisles?

Africa Check then turned to our Twitter followers to crowdsource this fact-check.

[THREAD] Let's see if we can crowd source a #factcheck of this video. Follow this thread & help us verify if the video is fact or fiction 👇🏾 https://t.co/ujA3xOXNrn

Nchidzi Smarts observed that the aircraft in the video had two aisles. "The 737 Max is a single-aisle aircraft, the one on the video is two aisles, a widebody aircraft, possibly a 787 or Airbus A350," he tweeted.

Its an Ethiopian Airline aircraft yes, but not the one that went down. The 737 Max is a single aisle aircraft, the one on the video is two aisles,a wide body aircraft, possibly a 787 or Airbus A350.

That looks similar to an Ethiopian Airlines 787 interior (https://t.co/Y92jsWF6tX), the uniform matches too. It's clearly not the 737 MAX 8 accident, because that was a single aisle aircraft and the one in these photos is a dual-aisle aircraft.

The Ethiopian aircraft which went down, a 737 Max is a single aisle plane; while the video in question features a double aisle, wide body aircraft possibly a 787.

Twitter user Second 2 None also suggested inconsistencies in time. "The video looks to have been shot at night and the tragic incident happened in the morning hours Ethiopian (EAT) time."

Plus the video looks i have been shot at night and the tragic incident happened in the morning hours Ethiopian (EAT) time.

It is clear that the aircraft in the video has two aisles. The Boeing 737 MAX 8 is a single-aisle aircraft and therefore cannot be that plane.

Many people shared the video out of heartbreak and compassion for the 157 passengers and crew who died on Sunday morning. But sharing unverified videos does little to help. - Africa Check (12/03/19)

Kenyans Hit Out at Associated Press Tweet on Plane Tragedy

Kenyan Man Lost Five Relatives in Ethiopian Plane Crash
Tagged:
Copyright © 2019 Africa Check. All rights reserved. Distributed by AllAfrica Global Media (allAfrica.com). To contact the copyright holder directly for corrections — or for permission to republish or make other authorized use of this material, click here.