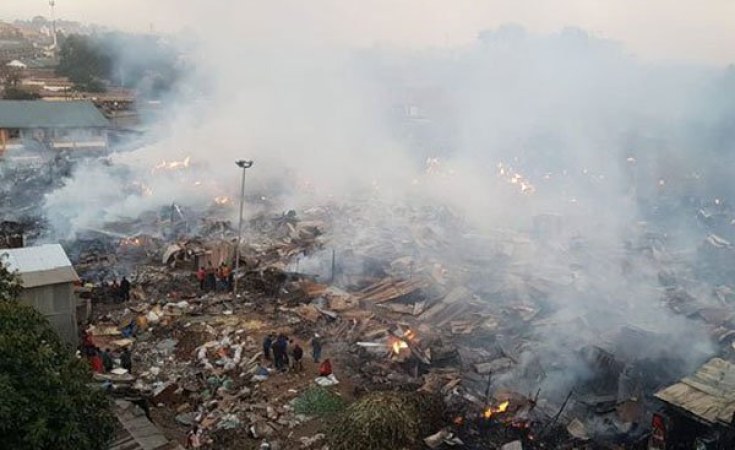 A huge fire has razed a section of Toi Market in Kibera, some seven kilometres from Nairobi's central business district.

Witnesses told the Nation that the flames broke out at 3am on Tuesday and by 6am, they had reduced to ashes property worth millions of shillings.

By 6.30am, the flames were still spreading fast and shanties, including those in residential areas, could be seen smouldering after being reduced to ashes.

Clouds of black smoke could also be seen billowing from make-shift stalls that were used to store bales of apparel overnight.

The open-air market, famous for used clothes, fresh produce, artefacts and toys, is located on the outskirts of Kibera slum, one of the biggest informal settlements in Africa.

The market with more than 5,000 small-scale traders sits on a four-acre plot on Suna Road and there have been plans by the Nairobi City County government to erect modern houses on the parcel.

The meeting place for thousands of buyers and sellers has suffered the stinging pain of fire incidents since 2014.

For investors here, battling flames has become an annual nightmare that consumes their investments and leaves them nursing severe burns of losses.

The informal market was rocked by infernos on November 2014, June 2015, February 2016, May 2017, and January 2018, sparking speculations by traders and the local community that there was a plot by some land grabbers to elbow them out of the market.

The 2014 fire destroyed a large section of the market, rendering hundreds of traders jobless.

Investigations by the police established that the fire started in one of the stalls before spreading to others.

Get Us Out of Here - U.S. to Evacuate Citizens Out of Africa
Trade