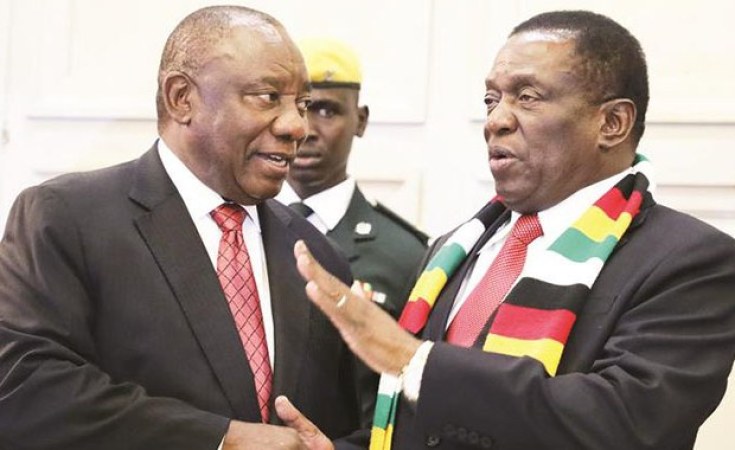 President Cyril Ramaphosa has reiterated South Africa's commitment to work with Zimbabwe in addressing the socio-economic challenges experienced by the two neighbouring countries.

President Ramaphosa made the commitment in his opening remarks of the SA-Zimbabwe Bi-National Commission in Harare, Zimbabwe, on Tuesday.

The President is in the country for the third session of the South Africa-Zimbabwe BNC with his counterpart, President Emmerson Mnangagwa.

The visit is part of efforts to strengthen mutual cooperation and deepen the implementation of 45 bilateral agreements during the Bi-National Commission (BNC).

The BNC is preceded by a ministerial session, which was held on Monday, to consider and adopt the draft agreed minutes and joint communique negotiated by senior officials on 7 and 8 March 2019.

"Although our BNC is only just over three years old, our relations date several decades. Through steadfast servicing of this BNC, our two countries will be able to consolidate the bilateral cooperation existing between our countries and to explore other areas of cooperation," the President said.

He saluted the new administration for its efforts through the Programme of Action to take Zimbabwe out of its current difficulties and make it a viable partner for South Africa, the region and other development partners.

"In support of your commendable efforts, in February of this year at the World Economic Forum, South Africa made a call to the international community to assist Zimbabwe and lift sanctions. We are pleased that the European Union heeded the call and in February 2019 decided to lift sanctions on the current members of your administration," he said.

President Ramaphosa said this is the first of many steps needed to support Zimbabwe's recovery.

"South Africa stands ready to render support to Zimbabwe within our means in your quest for economic renewal. It is our wish that, using the BNC mechanism, we should at our level strive to provide the strategic impetus to drive the bilateral relations to a significantly higher level."

The President said South Africa and Zimbabwe should work together to explore a variety of issues to further deepen cooperation. This includes deepening the social ties between the two countries and the region through greater people-to-people cooperation.

The two countries already work together in many critical areas, such as economic cooperation and infrastructure development, energy production, mining, defence, health, transport, migration issues, and information and communication technology. This is through the signed 45 agreements that are being implemented by State departments.

"I am encouraged by the participation of South African business in various sectors of the Zimbabwean economy such as engineering, construction, banking, retail, hospitality, mining exploration and services, among others. There are undoubtedly good prospects for both of our countries, but there is a need to ensure ease of doing business and elimination of trade barriers," President Ramaphosa said.

This should include, he added, the urgent conclusion of all outstanding work on the Beit Bridge One Stop Border Post for facilitation of free movement of persons, goods and services.

Should Ramaphosa Be Tough On Mnangagwa?
Tagged:
Copyright © 2019 SAnews.gov.za. All rights reserved. Distributed by AllAfrica Global Media (allAfrica.com). To contact the copyright holder directly for corrections — or for permission to republish or make other authorized use of this material, click here.