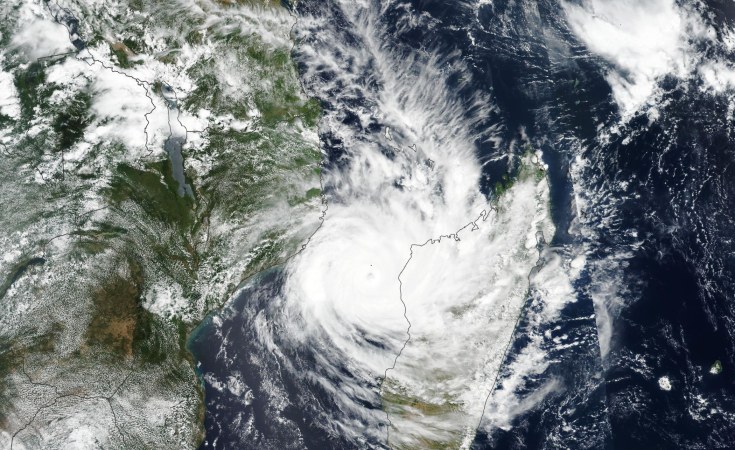 Lauren Dauphin/NASA Earth Observatory
Tropical Cyclone Idai is poised to move inland over East African countries that have already been soaked with rain by the same storm system. The Visible Infrared Imaging Radiometer Suite (VIIRS) on the Suomi NPP satellite acquired this image of the cyclone on March 11, 2019, as it spun across the Mozambique Channel. Around this time, the potent category 3 storm carried maximum sustained winds of about 105 knots (120 miles per hour). One week earlier, the developing storm delivered high winds and heavy rain to Mozambique and Malawi, where it caused deadly floods. The disturbance intensified into a major tropical cyclone over the warm channel between the southeast coast of Africa and Madagascar. Forecasters are calling for Idai to make landfall on Mozambique later this week, bringing a second round of wind and rain to the region.
Mozambique News Reports And Clippings (Milton Keynes, UK)
By Joseph Hanlon

Cyclone Idai, a category 4 cyclone with winds up to 180 km/h, heavy rain, and high waves, will hit the coast between Beira and Quelimane Thursday 14 March, the National Meteorological Institute (INAM) warned this morning. It will be the strongest cyclone to hit Mozambique in a decade. The cyclone is following an unusual path, crossing inland over Tete then moving east to the Mozambique Channel where it picked up energy from the warm water and is looping back toward the Zambeze valley, where it could return to Tete and could cause damage as far as Malawi.

The heavy rains last Thursday in Tete caused severe flooding, killing 10 people and displacing more than 10,000.  The floods cut one of the support columns of the bridge over the Rovubue River, cutting the link between Tete and Moatize and on to Malawi. Government officials estimate it will take $15 mn to repair the bridge. Flooding has also disrupted coal shipments from the Vale mine in Tete.

Forex reserve requirements were increased unexpected last week. Bank of Mozambique said that 36% of foreign currency deposits must be kept in reserve, up from 27%. It is an indication that the economic squeeze continues and that the government is short of dollars.

Tropical Cyclone Idai Makes Landfall in Mozambique
Tagged:
Copyright © 2019 Mozambique News Reports And Clippings. All rights reserved. Distributed by AllAfrica Global Media (allAfrica.com). To contact the copyright holder directly for corrections — or for permission to republish or make other authorized use of this material, click here.