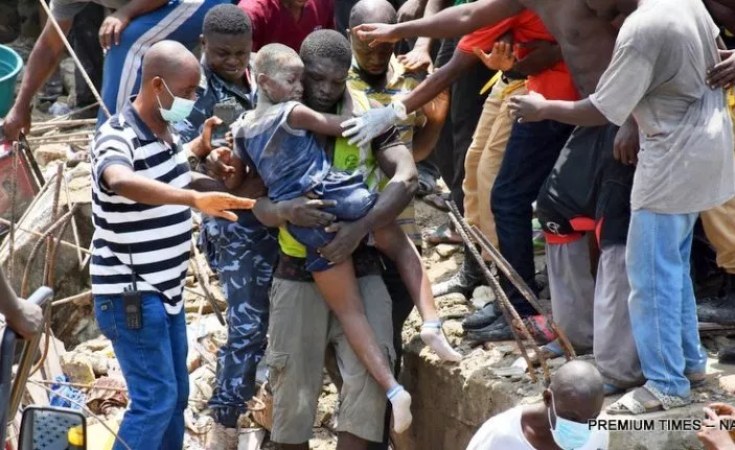 Kayode Oladapo/Premium Times
A child being rescued from the scene of a building, which collapsed at Itafaji on the Lagos Island on Wednesday.
Premium Times (Abuja)
By Ifeoluwa Adediran and Agency Report

A children's school occupied the top floors of the building.

More than 100 people, mostly pupils of Ohen Nursery and Primary School, were trapped in the rubble, witnesses said.

At least 40 pupils, including 10 dead bodies, had been pulled out as at Wednesday afternoon, according to the Lagos State Emergency Management Agency (LASEMA).

By sunset, six more people were brought out from the rubble, one of them - a child - lifeless.

The Lagos Island General Hospital released a list of 41 survivors whom they described as "stable."

Earlier, when he visited the scene of the building collapse, Governor Akinwunmi Ambode said most of the buildings in the area had been marked for demolition, but that some property owners in the area defy such notices, assuring that going forward, structural defective buildings would be demolished.

"The first observation is that this is an old building and it is only the Pent House and the other floors that we have been able to use to rescue people," said the governor, who arrived the scene at about 3 p.m.

"So far, from what I have been briefed, we have rescued about 25 people and some already dead but we were earlier informed that it was a school, the building is not technically a school, it is a residential building that was actually accommodating an illegal school so to speak on the second floor.

"Like we have said, we have been carrying out a lot if integrity tests on the buildings in this neighborhood and as you can see, some of them have been marked for demolition but we get resistance from landlords but we must continue to save lives and we would intensify our efforts to see that those have failed our integrity test, we would ensure that they are quickly evacuated and we bring the structures down," he said.

Some of the residents corroborated the governor's claim that the collapsed building had been marked for demolition before it was renovated.

One of the parents said her son was rescued by the neighbours who quickly ran to the site.

"My son was just lucky for him to have been rescued alive. The neighbours ran to the building immediately it collapsed.

"People in the neighbourhood started the rescue before the state rescue team arrived. I sincerely thank God and the people in the area,"she said.

A witness who pleaded anonymity said staff of the Lagos State Building Control Agency (LASBCA), came for inspection of the building regularly.

"This building was marked for demolition. We kept seeing people from Alausa coming to inspect the building, and the next thing we saw was the same building undergoing renovation.

"The state regulatory body is not strict with its policies. Such calamity would have been avoided if the right action was taken by demolishing the building. We pray people will be evacuated safely."

However, rescue teams with ambulances found it difficult to gain access into the scene due to the crowd that gathered at the scene.

Babajide Sanwo-Olu, the Lagos State governor-elect, hailed the Lagos State Government for responding swiftly to the distress by deploying the emergency agency of the state for immediate rescue operation.

"My deep condolences go to the families of the children who lost their lives in the unfortunate building collapse that happened at Ita Faji in Lagos Island today," Mr Sanwo-Olu said in a statement.

"This is one tragedy too many, given that most of the victims are school children. I urge people to cooperate with officials working on rescue efforts. My prayers are with the affected families and the school management.

"While emergency workers are making frantic efforts to clear the rubbles and rescue more victims, I urge residents to join hands with the government in any way possible to reduce fatalities and lessen attendant trauma of the incident. I am in support of the action being taken by the government and I urge every resident to show spirit of compassion inherent in our community."