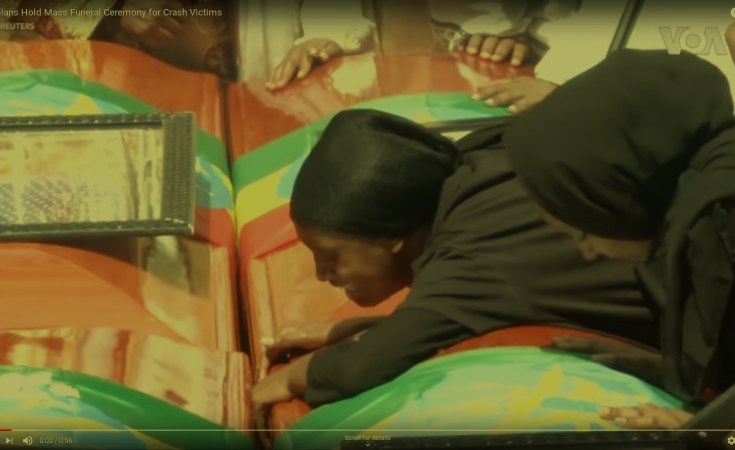 Screenshot VOA
The funeral that was held for Ethiopian victims of the airline tragedy.
Voice of America (Washington, DC)

Flight data recorders of Boeing 737 MAX planes that crashed in Ethiopia and Indonesia show "clear similarities", Ethiopia's transport minister said Sunday as the U.S. maker announced it was completing a software update for its anti-stall system.

Dagmawit Moges told reporters that the so-called black box from Flight 302 were recovered “in good condition that enabled us to extract almost all the date inside.”

He did not elaborate on what the similarities were.

Moges said that a preliminary report on last week's plane crash, which left 157 people dead, would be released within 30 days.

Meanwhile, pressure has been mounting on the U.S. Federal Aviation Administration about the safety of the aircraft. The agency has insisted it had followed standard procedures in certifying the Boeing 737 MAX model. It has been reported, however, that the Department of Transportation was investigating those procedures.

Even before the black box of last week's plane was discovered, many had drawn parallels between the Ethiopia Airlines' crash on March 10, and the Lion Air crash last October, both of which were Boeing 737 MAX 8 planes.

The crash of Ethiopian Flight 302 shortly after takeoff from Addis Ababa for Nairobi, prompted the U.S. and more than 30 other countries to ground the Boeing 737 Max 8 fleet.

Meanwhile, thousands marched in the Ethiopian capital, Addis Ababa, accompanying 17 empty caskets at funerals held on Sunday for the 17 Ethiopians killed in the crash.

Families of the victims were offered charred earth from the crash site to bury.

Ethiopian Airlines aviation staff gathered Sunday at Bole International Airport to remember the two pilots and six crew members on the flight who died in the crash.

The flight was also carrying 21 U.N. staff members, who were on their way to attend a major U.N. Environment Conference in Nairobi when the plane went down.

Kenya Going Ahead With Boeing Air Max Despite Ethiopia Crash
Tagged:
Copyright © 2019 Voice of America. All rights reserved. Distributed by AllAfrica Global Media (allAfrica.com). To contact the copyright holder directly for corrections — or for permission to republish or make other authorized use of this material, click here.