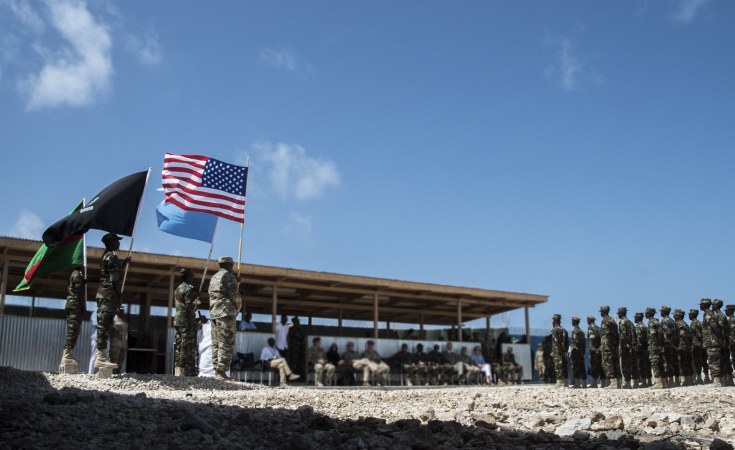 The investigation claims at least 14 civilians were killed as a result of airstrikes targeting al-Shabab insurgents. US-led airstrikes in Somalia have tripled under the Trump administration and look set to increase.

A damning new report by Amnesty International accuses US military forces of killing at least 14 civilians and injuring eight others in Somalia over the past two years.

The investigation, entitled The Hidden War in Somalia, investigated five out of a total of 100 US airstrikes carried out by Reaper drones and manned aircraft in the Lower Shabelle region outside the capital Mogadishu. The region remains largely under the control of the extremist group al-Shabab, which has remained the primary target of the United States' Africa Command (AFRICOM) since 2007.

The rights group collected evidence from 150 in-person interviews or encrypted voice calls placed from outside al-Shabab controlled territory -- including with eyewitnesses, relatives of victims and experts within the US military -- and also analyzed satellite imagery as part of its investigation.

Amnesty International says the attacks appear to violate international humanitarian law and has called on the US government to "carry out impartial, thorough investigations" based on the report's findings.

'Shroud of secrecy' around civilian deaths

Although AFRICOM has confirmed that it carried out at least four of the five attacks mentioned in the report, it denies killing civilians as a result of the airstrikes.

In an official statement released to coincide with the report, AFRICOM said it "goes to extraordinary lengths to reduce the likelihood of civilian casualties" and that its assessment of Amnesty International's allegations "found that no AFRICOM airstrike resulted in any civilian casualty or injury" based on "intelligence methods not available to non-military organizations."

However, Amnesty maintains that its evidence is strong enough to warrant further investigation.

"We are confident that the allegations made in this report are credible, based on our investigations," Amnesty International's Somalia-based researcher, Abdullahi Hassan, told DW. "We are 100 percent sure that 14 civilians were killed and at least eight more were injured in five of the strikes we documented."

Read more: Life in Somalia under peacekeepers and al-Shabab threats

Amnesty's Senior Crisis Advisor on Arms and Military Operations, Brian Castner, has accused US forces of installing a "shroud of secrecy" concerning its military role in Somalia, and described the civil war as "a smokescreen for impunity."

According to AFRICOM, the most recent airstrike took place on March 18, resulting in the deaths of three insurgents.

In a press release, AFRICOM acknowledged reports of civilian casualties, and claimed it would "review any information it has about the incident, including relevant information provided by third parties."

Only five out of approximately 100 US military airstrikes were investigated, meaning the actual civilian death toll is likely to be higher, according to Amnesty International.

However, researcher Hassan says a full investigation into all US airstrikes would prove extremely difficult.

"Most of the locations where the strikes have taken place are controlled by al-Shabab fighters, so it was extremely difficult for people like us who document human rights violations to get access to this region," he told DW.

Hassan warns that if US airstrikes continue at the current rate, possible civilian casualties are likely to increase.

"In January and February alone, they have carried out 24 airstrikes. If they continue at this pace, they may well carry out over 140 strikes in 2019 alone."

US forces hit the militants approximately 35 times in 2017, according to the Somali military. In 2018 this number increased to 47 strikes.

Although the US military has maintained a presence in Somalia since 2007, airstrikes from both drones and manned aircraft have tripled since the beginning of the Trump administration.

In March 2017, the White House issued approval to the Pentagon to expand its fight against al-Shabab in Somalia by declaring large parts of the country "areas of active hostilities."

As a result, commanders no longer need to seek high-level vetting to approve US military airstrikes against the extremist group.

"It allows [us] to prosecute targets in a more rapid fashion," General Thomas D. Waldhauser, the current commander of AFRICOM, told reporters after the Executive Order was signed.

However, Hassan is concerned that applying a broad interpretation of this directive to the conflict in Somalia ultimately increases risk to civilians.

"Any military-aged men found to be in close proximity of al-Shabab fighters in specific geographic locations deemed by the US military as areas [which are] sympathetic or supportive of al-Shabab are now considered legitimate targets," he said.

"[If] this is the actual interpretation of the directive, then that directive is in direct contravention of international law."

Although the US military claims to have safeguards in place which protect civilians, Amnesty International refutes their effectiveness.

"The US government needs to put in place a mechanism that easily allows the Somali population to report any problems that they encounter when the US carries out airstrikes in their locations."

General Waldhauser has himself questioned the effectiveness of the US airstrikes.

"We know that [the airstrikes] are causing problems, we know that they are deterring," he said in December. "It is an open question as to how much."

Established in 2007, AFRICOM aims to maintain a consistent presence across Africa in order to help address security concerns.

Currently the US has approximately 7,200 soldiers and civilian personnel on the continent. However, in November 2018, the Pentagon announced plans to reduce its military presence in Africa by 10 percent over the next several years.

AFRICOM has been working alongside the African Union Mission to Somalia (AMISOM) and is aiming to help transition AMISOM's security responsibilities to the Somalian government. Since its deployment in 2007, AMISOM has become the African Union's (AU) longest-running, deadliest and most costly operation.

Al-Shabab emerged as a violent extremist movement in Somalia between 2006 and 2008 and aims to overthrow the Somali government and impose strict Islamic law.

Since 2009 Somalia has been gripped by a civil war, sparked primarily by al-Shabab, leading to the joint efforts of AFRICOM and AMISOM to stem the insurgency which remains in control of large parts of the country.

The extremist group, which is allied with al Qaeda, frequently carries out attacks both inside and outside Somalia. In January, 21 people were killed in an attack on a hotel and office complex in neighboring Kenya's capital Nairobi.

Somali's Al-Shabaab Founder to Be Released From Prison
Tagged:
Copyright © 2019 Deutsche Welle. All rights reserved. Distributed by AllAfrica Global Media (allAfrica.com). To contact the copyright holder directly for corrections — or for permission to republish or make other authorized use of this material, click here.