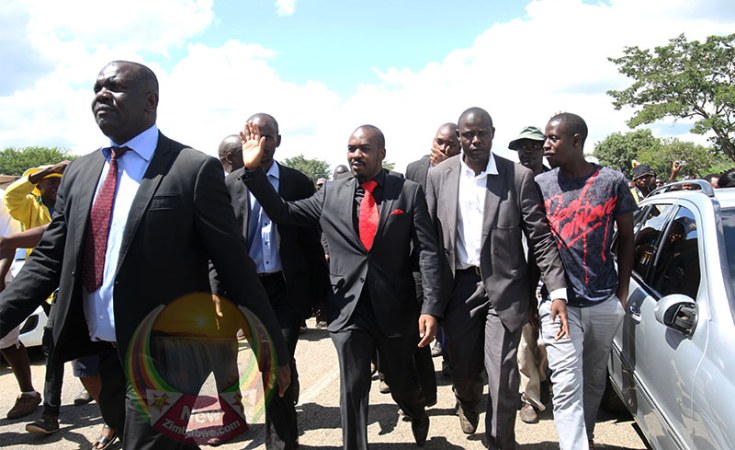 HOME Affairs deputy minister and top Zanu PF official, Mike Madiro says the Monday visit by MDC leader Nelson Chamisa to Cyclone hit areas in Manicaland was an unwelcome attempt by the firebrand opposition leader to ride on the publicity brought by the tragedy to prop up his "political CV".

Following the catastrophe that killed atleast 98 since Friday - according to the official count Tuesday - coupled with massive damage to land and property, Chamisa and his entourage attempted to visit parts of the affected areas.

However, there were reports the 41-year-old politician and his lieutenants were blocked from proceeding into the areas by authorities who were reportedly still trying to access marooned villagers and provide other relief assistance.

According to MDC spokesperson Jacob Mafume, Chamisa was stopped at a roadblock some 12km from Chipinge.

The main opposition was up in arms, claiming the move by authorities was a deliberate attempt to deny its leaders a chance to commiserate with distressed citizens.

Chamisa was later reported to have donated some fresh chicken to some villagers.

Images of him riding on a scotch cart also went viral on social media.

Commenting on the visit Tuesday, Madiro, who is also Zanu PF provincial chair for Manicaland, said as a party, they were amazed by the opposition leader's stance, describing the act as an attempt by the latter to prop up his political fortunes and nothing close to a genuine effort to commiserate with survivors of the horror.

"As a party, we really appreciate support being rendered by government through various departments but we are not happy with leaders of opposition political parties who want to use this unfortunate incident to prop up their political CVs.

"As we are mourning, we expect everyone to come aboard and tackle the challenge as Zimbabweans regardless of political affiliation.

"Some leaders have stooped so low to the extent of bussing people from outside the affected zones and give them chickens bought in the markets as if they are genuinely assisting," Madiro said.

The Zanu PF official said if the opposition was genuine about rendering assistance, it should come and join hands with government departments that are working flat out on the ground to help victims through rescue efforts.

Cyclone Idai has left a trail of death and destruction in South eastern Manicaland in which over 200 people are also reportedly missing.

According to local government minister July Moyo, there were reports some 300 dead victims of the catastrophe have been washed away into neighbouring Mozambique where they have been spotted floating in rivers by villagers.

Cyclone Idai Relief Concert for Zimbabwe - Music for a Good Cause
Tagged:
Copyright © 2019 New Zimbabwe. All rights reserved. Distributed by AllAfrica Global Media (allAfrica.com). To contact the copyright holder directly for corrections — or for permission to republish or make other authorized use of this material, click here.