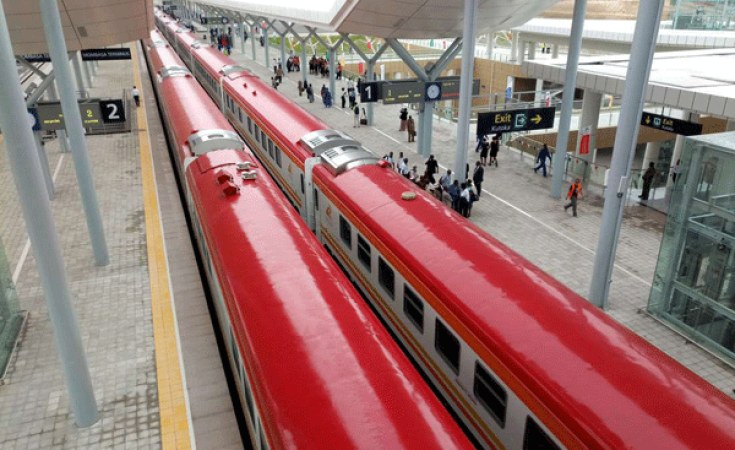 The government is negotiating with China for a loan of about Sh370 billion to complete the third phase of the standard gauge railway.

According to Kenya Railways Acting Director Philip Mahinga, the corporation is also holding talks to finance a system that will ensure the railway, its passengers, goods and equipment are secure as they snake through sparsely populated regions in its 974-kilometre journey from Mombasa to Malaba in Busia County.

During a briefing about the status of the multibillion-shilling endeavour at the Chinese embassy in Nairobi on Tuesday, the country's Chargé d'affaires Li Xuhang said the amount would be in form of concessional and hard loans.

"We all know that the first phase of SGR from Mombasa to Nairobi cost Sh327 billion and the second phase Sh150 billion. For phase 2B, negotiations between the two governments are on so I will not give any figure at the moment," Mr Mahinga said.

Mr Mahinga added that the full details would be given during the official opening of the Naivasha terminal in May.

However, an inside source said the interim amount is Sh368 billion. "SGR trains move 6,000 people daily, and we are concerned about our operations and security of the equipment," Mr Mahinga said.

"The movement of trains from Mombasa to western Kenya needs to be secure from terrorists and other challenges. We ask the Chinese government to support us in this area."

It is not clear how much it would cost to secure the railway line.

Kenyans, the International Monetary Fund and experts have raised questions about the repayment status of the existing loans.

The terms of repayment have also been a subject of debate following revelations a few months ago that the port of Mombasa could be handed over to Chinese if Kenya defaults on the loans.

"The railway has created more than 50,000 jobs locally and boosted Kenya's economic growth by 1.5 percent," he said during the press briefing attended by officials of SGR management, the National Treasury, Ministry of Transport and Infrastructure and Kenya Railways Corporation.

The Chinese said Kenyans form a majority of the SGR managers and employees, and that their safety is guaranteed, "contrary to negative reports in the media".

They said 25 stations out of a total of 33 have already been handed over to well-trained local managers, and that Kenyans form the largest number of SGR employees at 2,723 against 828 from other countries.

"The Chinese government and people have been reading reports that Kenyans do not support the SGR and the loans. We've also seen reports that the loans are a debt trap and that the Chinese are venturing too much into Kenya," Mr Xuhang said.

He said China and Kenya attach great importance to the railway, but admitted that people at the grassroots may have reservations about it.

"We have reached an agreement with the county government of Mombasa to conduct a study along the railway line. We want to talk to the people and get their views and suggestions on how to improve the SGR," the envoy said.

China Road and Bridge Corporation external communications officer Zhao Yang said more Kenyans than foreigners are employed at the management and subordinate levels of the project.

Kenyans Wary of Govt's Urgent World Bank Loan Request
Tagged:
Copyright © 2019 The Nation. All rights reserved. Distributed by AllAfrica Global Media (allAfrica.com). To contact the copyright holder directly for corrections — or for permission to republish or make other authorized use of this material, click here.