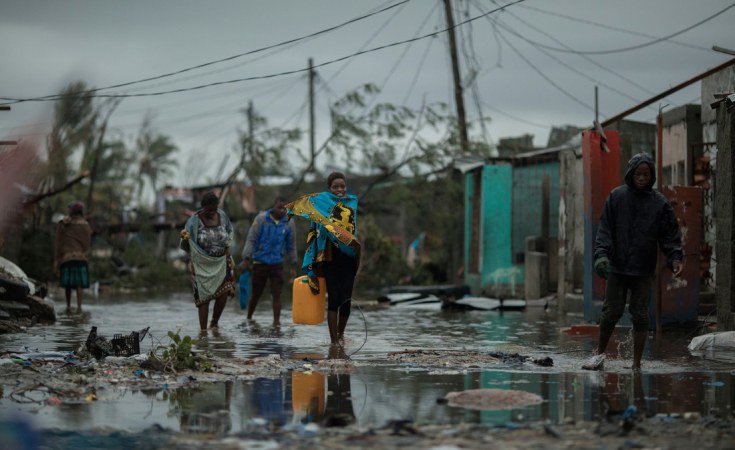 Josh Estey/CARE
Praia Nova Village was one of the most affected neighborhoods in Beira. Being a located on the coast, this shanty town of loosely built homes were extremely vulnerable to the high winds and rain. Following the cyclone families are returning trying to pick up the pieces of their lives.
New Zimbabwe (London)
By Robert Tapfumaneyi

PRESIDENT Emmerson Mnangagwa has declared two days of national mourning, following the death and destruction caused by Cyclone Idai in the south eastern districts of Manicaland, parts of Masvingo and Mashonaland East.

Official figures have put the death toll at 142 people as of late Thursday, with expectations that it would rise.

Mnangagwa at a press conference held as State House Thursday evening, paid tribute to all who had assisted and continue to assist in relief efforts following the tragedy.

"We all have to try our best to bring comfort to one another, especially to those affected.

"To that end, government is declaring two days of national mourning, starting this Saturday, in honour of all those who have lost their lives and to spare a thought to all those who are still grieving," the President said.

He added: "I also recognise and pay tribute in a very special way to foreign governments, organisations and citizens whose deep sense of compassion has moved them to stand by us in this hour of great national grief and need."

"We expect all our citizens both individually and collectively and in different ways which are informed by their faiths, beliefs and cultures to remember all our departed by way of prayers and whatever other forms and practices we may have."

The Zanu PF leader said the two days will allow Zimbabweans to reflect on a tragedy whose impact will leave an indelible mark of all.

Zimbabweans at home and abroad as well as humanitarian organisations and foreign governments have been donating cash, goods such as clothes, shoes, groceries and blankets, gas tanks, cooking utensils, dried food, bed mattresses and medical supplies among others to the victims of Cyclone Idai.

Mnangagwa's declaration also follows statements by both the ruling party Zanu PF and opposition MDC that they had shelved scheduled rallies this weekend in honour of the dead.

Most of Cyclone Idai's Victims Are Children
Tagged:
Copyright © 2019 New Zimbabwe. All rights reserved. Distributed by AllAfrica Global Media (allAfrica.com). To contact the copyright holder directly for corrections — or for permission to republish or make other authorized use of this material, click here.