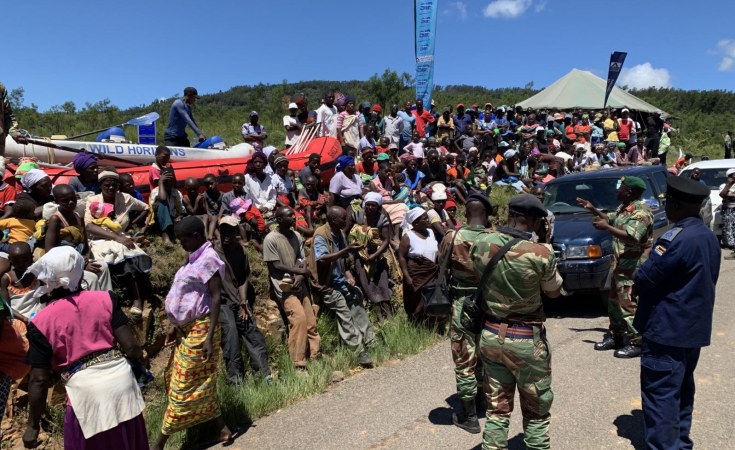 Columbus Mavhunga/VOA
People in Chimanimani complain to senior army officials in charge of a temporary camp set up after Cyclone Idai that food is not reaching them.
The Herald (Harare)
By George Maponga

Government and the ruling Zanu PF have dismissed circulating reports alleging that some homeless victims of Cyclone Idai in Bikita were being ripped off through paying a daily levy for accommodation, by fellow villagers in the disaster prone district.

Bikita is one of the districts hardest hit by Idai which claimed five lives, affected more than 4 000 households and left nearly 300 families completely homeless.

There were reports that some unscrupulous people in the district were ripping off victims in Bikita by charging them a levy of $10 per night per person for accommodation.

Deputy Chief Secretary in the Office of the President and Cabinet (Presidential Communications) Mr George Charamba was quoted saying some of the victims were being ripped off.

However, Bikita district administrator Mr Bernard Hadzirabwi yesterday disputed the report saying investigations so far showed nothing of that sort was happening.

"We heard it on the news and we effected investigations which even included members of the Joint Operations Command here and we found nothing of that sort here.

"Investigations that we have carried so far, have shown that no victim is paying for accommodation here and we even sent our officials to places where that practice was said to be happening and it turned out to be false," said Mr Hadzirabwi.

He said Government would not allow that to happen especially to victims of Cyclone Idai whose effects are being mitigated to make sure those affected rebuild their lives.

Mr Hadzirabwi's revelation was also corroborated by Zanu PF national political commissar Retired Lieutenant-General Engelbert Rugeje who was speaking in Bikita on the sidelines of a donation of blankets and other materials he sourced from sons and daughters from the district.

Rt Lt-Gen Rugeje, who hails from the district, blamed the social media for spreading false reports saying the people of Bikita practiced ubuntu/unhu.

"I was disturbed when I heard reports that some victims here were being ripped off because I come from Bikita and I know the people from my home area very well," he said.

"The people of Bikita have always upheld the tradition of being there for each other and sharing, be it in good or bad times. Report of victims being ripped off here is an act of mischief particularly on social media. I think that the source of such malicious information should account for that."

He said inquiries from traditional leaders and ordinary people on the reports had proven the allegations to be completely false.

"The people of Bikita, who are predominantly of the Duma clan have a heart, they are known for their purity and uprightness particularly on issues to do with helping each other and under no circumstances would they make life hard for each other," he said.

Humanitarian aid from Government, donor organisations and ordinary well-wishers has been flowing to cyclone victims in Bikita and three other districts ravaged by the disaster.

Cyclone Idai Relief Concert for Zimbabwe - Music for a Good Cause
Tagged:
Copyright © 2019 The Herald. All rights reserved. Distributed by AllAfrica Global Media (allAfrica.com). To contact the copyright holder directly for corrections — or for permission to republish or make other authorized use of this material, click here.