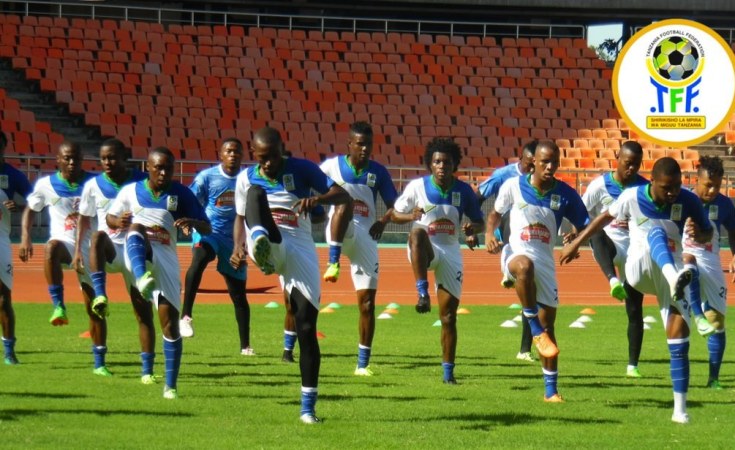 Dar es Salaam — The National Stadium was awash with the national flag colours when Taifa Stars qualified for the Africa Cup of Nations (Afcon) finals for the first time in 39 years yesterday.

Taifa Stars, needing a win to sail through, thrashed Uganda Cranes 3-0 in an exciting Group L at the National Stadium.

With fans clamouring to make it into the 60,000-seater venue, players knew what qualification for the 2019 Nations Cup meant to Tanzanians.

Simon Msuva, who plays for Diffaael-Jadid in Algeria, opened the scoring in the 20th minute with a close range shot for a 1-0 half time lead.

Five minutes into the second half, defender Erasto Nyoni shot fans into wild celebrations when he made it 2-0 for the hosts through a well-struck penalty.

Stars were awarded the penalty after Uganda Cranes defender handled the ball in the penalty box in desperate efforts to clear a shot by Mbwana Samatta.

Noyni made no mistake with it, sending goalkeeper Dennis Onyango the wrong way.

From then on, Stars took command of the game and Aggrey Morris hit a final pin on Uganda Cranes coffin with in the 57th minute with a superb header.

The result saw Stars go two points clear ahead of second-placed Lesotho, who were forced to barren draw by Cape Verde in Praia at the same time.

Uganda, who finished top of the group with 13 points, also through to the finals to be held in Egypt in June despite the defeat.

The last time the Taifa Stars competed in the Afcon finals in 1980 in Nigeria, none of the current crop of players were born.

Taifa Stars head coach, Emmanuel Amunike, was a 10-year-old preteenager in Eziobodo, Nigeria, while some 559 km away, hosts Super Eagles beat the Stars 3-0 in the opening match of the 1980 edition in Lagos.

It was the first time they had qualified for what was then an eight-nation tournament. The teams were split into two groups of four each.

Taifa Stars lost two of their three matches (3-1) to hosts Nigeria and 2-1 to Egypt.

They claimed their only point in a 1-1 draw against Cote d'Ivoire as they bowed out in the first round.

In Egypt, Stars will feature in a new structured competition with 24 nations - previously 16 countries - from the African continent competing for the gold-plated trophy.

And also the first tournament to take place in June for the first time following a vote by Caf's executive committee in 2017.

Usually, the Afcon finals were being held in January and February,

These Teams Qualified for 2019 AFCON
Tagged:
Copyright © 2019 The Citizen. All rights reserved. Distributed by AllAfrica Global Media (allAfrica.com). To contact the copyright holder directly for corrections — or for permission to republish or make other authorized use of this material, click here.

These Africans Are on TIME Magazine's Most Influential List
Women