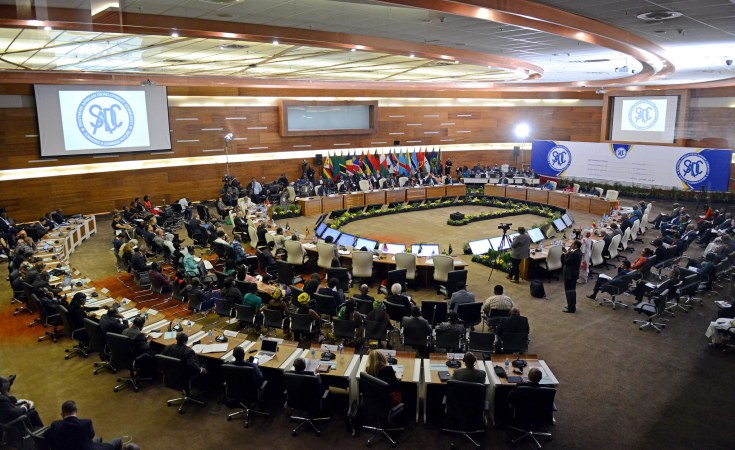 ANC chairperson Gwede Mantashe has slammed Morocco for holding a parallel conference on the issue of Western Sahara's independence, on the same day that the Southern African Development Community (SADC) solidarity conference kicked off.

Mantashe told journalists on Monday, following the opening of the conference at the Department of International Relations headquarters, that Morocco had paid for representatives to attend its conference.

"I would have expected that from Morocco because they have resources," he said.

"They are exploiting even the Western Sahara resources. They are using them to buy support and they are succeeding on the continent."

Western Sahara is rich in phosphates and other minerals.

Mantashe claimed that Morocco also "bought" support to be admitted to the African Union in January 2017 from the majority of African states.

Only 10 countries, "mainly liberation movements and SADC", opposed Morocco's admission. Morocco left the AU in 1984 when Western Sahara (officially the Sahrawi Arab Democratic Republic) was admitted as an AU member.

Mantashe also expressed concern about other countries having an influence on the African continent.

"It's going to be more complex if you see the invasion of the continent by Israel as well. It's making the continent a playing ground for occupying forces and we have a responsibility to continue talking to raise the awareness," he said.

South Africa is in the process of scaling down relations with Israel because of what the South African government says is its occupation of Palestine. But it has recently agreed to allow Morocco to send an ambassador to Pretoria.

Mantashe said South Africa would continue to campaign in the AU and explain to the ambassador that Morocco should move out of Western Sahara and give the people self-determination.

He also said South Africa had to accept the ambassador from Morocco because the country was now a member of the AU.

"You don't howl at the organisation you belong to."

Mantashe, who attended the conference in his capacity as ANC chairperson, said it was disappointing that the ANC's fraternal organisation Chama Cha Mapinduzi from Tanzania declined an invitation to attend the conference. It wasn't immediately clear why the party declined.

Western Sahara foreign minister Mohamed Salem Ould Salek told delegates during the opening summit that it was "time for the AU to take responsibility" and push for Western Sahara's independence.

In what was considered a victory for Morocco, the AU resolved at its July summit in Nouakchott last year that the continental body would limit its peace efforts in the territory and rather support process led by the United Nations.

"Can we accept today in the 21st century that an African country occupies a territory from another African country? This is a very grave situation," he said.

International Relations Minister Lindiwe Sisulu said the Western Sahara solidarity conference was "unprecedented" because "we have no recollection of an intergovernmental body ever hosting a conference of this nature".

The Kingdom of Morocco said in a statement that its conference aimed "to gather and unite [African countries] around the spirit and the letter of the Nouakchott decision, while avoiding the crystallisation of internal divisions that might jeopardise the solution of the regional conflict and damage the stability, the cohesion and the efficiency of the organisation".

It confirmed that the travel and accommodation expenses for delegates to the conference were borne by Morocco.

Why Western Sahara Divides Africa
Tagged:
Copyright © 2019 News24Wire. All rights reserved. Distributed by AllAfrica Global Media (allAfrica.com). To contact the copyright holder directly for corrections — or for permission to republish or make other authorized use of this material, click here.