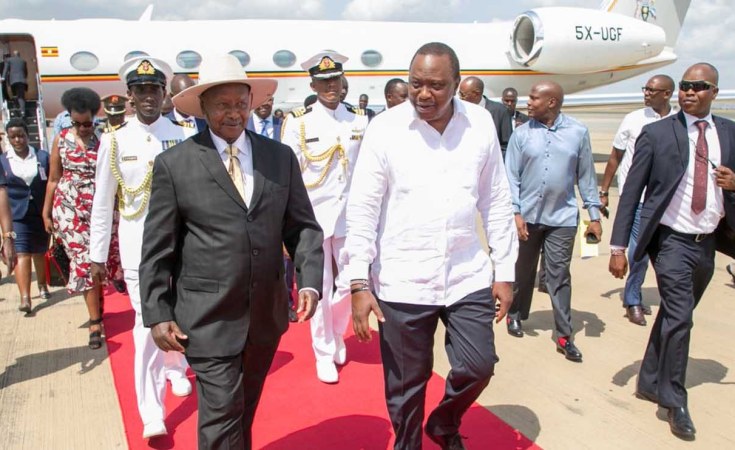 He will be hosted by President Uhuru Kenyatta at State House, Mombasa, where the two leaders will hold bilateral talks and a joint press briefing.

They are expected to discuss joint projects between the two countries and the East African integration agenda.

The meeting comes at a time a dark cloud of unresolved trade spats and boundary rows hang over the two countries.

Kenyan farmers have raised an alarm over the saturation of the cereals market with maize from Uganda, denying them a ready market for their produce.

Poultry farmers have also decried the influx of eggs from Uganda, saying they are struggling to break even due to the high cost of feeds and low returns.

Kenya and Uganda are both claiming ownership of the fish-rich Migingo Island on Lake Victoria.

The dispute has been ongoing since February 2009 and a joint survey team was set up to review the colonial map.

According to a statement from State House, President Museveni will tour the Mombasa port, which has over the years remained the facility of choice for Uganda, handling key items including fuel, consumer goods as well as imports and exports of tea and coffee.

The visiting Head of State is also expected to attend the Kenya-Uganda business forum at the Whitesands Hotel, where the non-tariff barrier issues, including cargo clearance time, and the bottlenecks on the Northern Corridor are expected to be on the agenda.

The Ugandan leader will then address a public lecture at Kenyatta University on Friday before flying out.

President Museveni was in Kenya in August last year, where the two leaders discussed the possibility of Uganda picking up its transshipment from the Nairobi inland container depot in Embakasi.

On Tuesday, the Foreign Affairs ministers from Kenya and Uganda met in Nairobi and discussed a number of challenges, mostly those compounded by protectionist policies, which continue to hinder relations between the two countries.

"It is a government-wide, society-wide relationship that we have been tasked with my colleague from Uganda to help coordinate and ensure we fulfil commitments that have been made. We have also agreed on mechanisms of constant follow-up on implementation of decisions to be made," Kenya's Monica Juma said.

"Uganda values its relationship with Kenya in trade and in interactions between its people in integrating our region."

Uganda is Kenya's biggest market for its goods, and the Port of Mombasa serves as its biggest client, especially for transit cargo, ahead of the Democratic Republic of Congo, South Sudan and Rwanda.

Kenya's Big Rail Dream Begins to Fizzle Out as Losses Mount
Tagged:
Copyright © 2019 The Monitor. All rights reserved. Distributed by AllAfrica Global Media (allAfrica.com). To contact the copyright holder directly for corrections — or for permission to republish or make other authorized use of this material, click here.