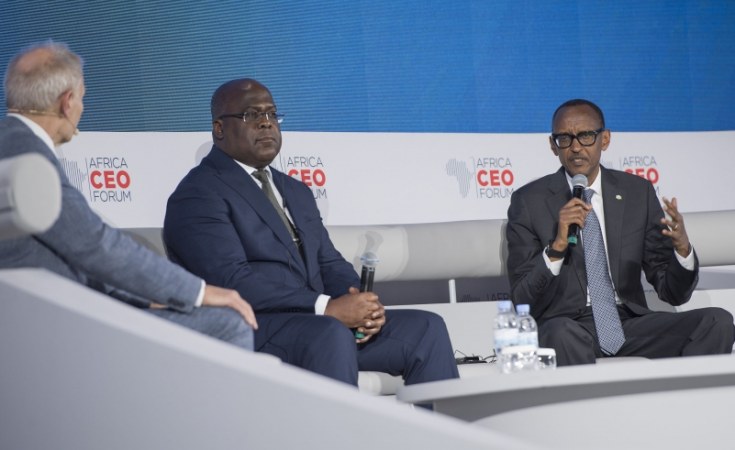 Village Urugwiro/New Times
Presidents Paul Kagame and his DR Congo counterpart Félix Tshisekedi (centre) during a panel discussion that was moderated by Patrick Smith (left), the Editor-in-Chief of The Africa Report.
The New Times (Kigali)
By Collins Mwai

President Paul Kagame and his DR Congo counterpart, Félix Tshisekedi, have said that the two countries will continue to prioritise stability and development both of which require close cooperation.

They were both speaking at the closing ceremony of the Africa CEO Forum 2019 held in Kigali since Monday.

The two leaders of the neighbouring countries reiterated their intentions to work closely for the common interest of their respective citizens and stressed they would not be derailed by petty issues.

"We want to be serious with matters of stability, development and we can't achieve that without cooperation, working together, really focusing on the common interest of our countries and people which we should be representing. Some of these serious matters are undermined by petty things," Kagame said.

He said that despite any challenges that might have existed or exist, there is much progress to be made if they were to focus on their peoples' priorities.

Kagame said that, as opposed to focusing on challenges such as inefficiencies and inadequate resources within the region, attention ought to be on using what is available to change people's lives.

"There are inefficiencies, lack of resources but we have sufficient resources within and among ourselves to call upon to deal with these matters; that is where we begin and start the discussion from," he added.

Challenges and differences of opinions among countries, Kagame said, should not derail regional integration and progress as citizens of different countries have close ties and continue to work closely.

"African people are ahead of their leaders in understanding the importance of integration and practicing it. In some places, there is trade going on even with bullets flying. It is the responsibility of leaders that this should not be the case, or be normalised," he said

Commenting on the issue, President Tshisekedi, who was visiting Rwanda for the first time since his election in January this year, said that as neighbouring countries, Rwanda and DR Congo are better off working closely.

On armed militia groups that have often threatened the security of the two countries, Tshisekedi said that they do not stand for a cause and should be neutralised through demobilisation and reintegration programmes.

Several militia groups have for years found safe haven in DR Congo, including FDLR and of late the Rwanda National Congress, all with a mission to destabilise Rwanda.

Commenting on frequent interference and meddling by external parties, President Kagame said that those were signs of bad politics which should not be tolerated.

"If you think that you don't like President Kagame or Rwanda because you think what should happen in Rwanda is supposed to be dependent on you, your views and decisions, this is bad politics," he said.

Rwanda and DR Congo are collaborating on the implementation of a simplified clearance procedure under Common Market for Eastern and Southern Africa (COMESA).

The two countries are also members of the Economic Community for the Great Lakes Region, (CEPGL).

The panel discussion marked the end of the two-day Africa CEO Forum, which brought close to 2,000 business leaders from across the globe as well as President Faure Gnassingbé of Togo, President Sahle-Work Zewde of Ethiopia, and Prime Minister Gon Coulibaly of Ivory Coast. 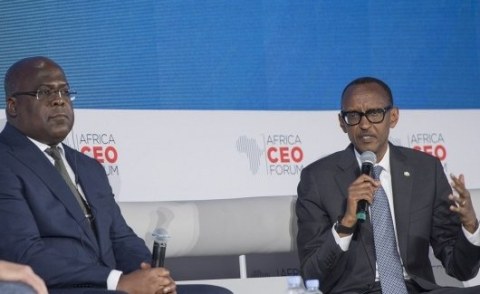 Is DR Congo's President Tshisekedi a Lame Duck?
Tagged:
Copyright © 2019 The New Times. All rights reserved. Distributed by AllAfrica Global Media (allAfrica.com). To contact the copyright holder directly for corrections — or for permission to republish or make other authorized use of this material, click here.