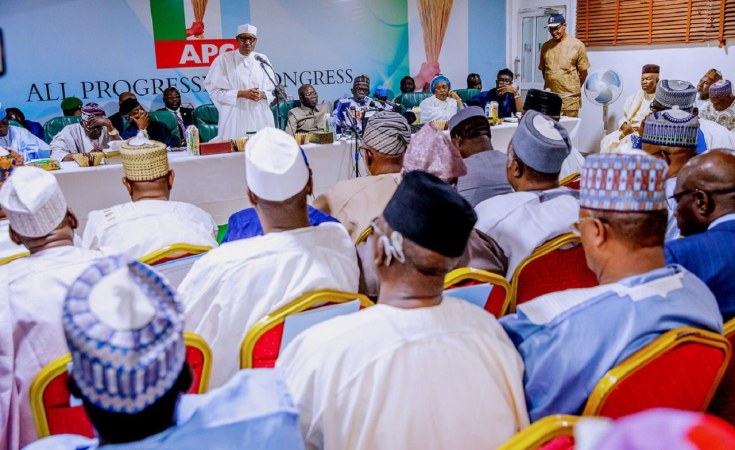 A group of senators-elect campaigning for Senate Leader Ahmed Lawan yesterday, dismissed claims by former Senate Leader Mohammed Ali Ndume as untrue and misleading. This has heightened the intra-party intrigues in the APC around the choice of the president of Nigeria's ninth Senate.

Aliyu Sabi Abdullahi, spokesperson of the 'Ahmed Lawan for Senate President Group of Senators,' told reporters in Abuja that APC senators-elect were carried along in the adoption of Lawan for the position.

This is contrary to the position of Senator Mohammed Ali Ndume, who claimed on Tuesday that the announcement of Lawan's adoption by APC National Chairman Adams Oshiomhole shocked the party's senators-elect during a dinner with President Muhammadu Buhari.

Ndume, at a media briefing in his Abuja residence on Tuesday, had alleged that the choice of Lawan by Oshiomhole was done without any consensus.

Although Abdullahi did not mention Ndume, he stated categorically: "It is not good for somebody to peddle lies." He said when Oshiomhole announced the adoption of Lawan, the party chairman spoke in the presence of some state governors including those of Oyo, Kebbi and Borno.

Abdullahi, who is also Chairman Senate Committee on Media and Public Affairs, quoted Oshiomhole as having appealed to them to support Lawan, to avoid the mistake of the past.

"Immediately he said that, there was instantaneous and spontaneous applause by senators who were there. For somebody to say there was surprise and shock following the announcement, he was economical with the truth. There was no shock, rather there was relief," Abdullahi said.

He noted that the APC has learnt its lesson from the mistakes it made in 2015 when Bukola Saraki emerged Senate president against the directive of the party, assuring that there would be no such crisis this time.

"We the senators-elect have made a choice. We have the right to say whom we want. Our choice is Ahmed Lawan. Do you expect that Mr. President and the party would abdicate their responsibility? This is what they accused us of in 2015. Now, they have spoken. Why are you complaining?"

Briefing reporters at the APC national secretariat in Abuja, he said Lawan enjoyed the backing of the party's leadership, including Buhari.

Lawan was picked ahead of other eligible senators after it was resolved that the position of the Senate president should be zoned to the northeast of the country, he said.

"We will have principal officers determined by simple majority. And because Nigerians have given us more than what we had in the outgoing dispensation, we have more than enough to elect all our principal officers. We don't need a single vote from the Peoples Democratic Party (PDP). And in any case, we don't actually envisage any election on that day because we are going to present our members to occupy these positions.

"What we practise in Nigeria is called the presidential system of government. And in a presidential system, it is winner takes all. Once you win, you take whatever you want. There is no room for power sharing because we don't need them to run this government," he said.

On Ndume's opposition to Lawan's endorsement, the party said the lawmaker was merely exercising his right to free expression, stressing that as a card-carrying APC member, he is bound by the decision.

The Senate meanwhile has advised the Federal Government to do more towards curbing corruption. It specifically called for adequate funding of the Office of Auditor General of the Federation (OAGF).

The Chairman Senate Committee on Public Accounts Matthew Urhoghide (PDP, Edo South) made the call yesterday in Abuja when Auditor General of the Federation Anthony Ayine appeared before the committee for a budget defence.

Urhoghide said it would be difficult for the government to achieve results in its fight against corruption when the auditor general, tasked with preventing sleaze, is underfunded.

"I wondered that the Economic and Financial Crimes Commission (EFCC) has a whopping N22 billion in 2019 budget while the Auditor General's Office has just N3 billion. I don't think they (executive) believe in this office, else they will not be underfunding it every year. If this administration really wants to achieve much in transparency and probity of public funds, it is better to invest in stopping corruption instead of fighting it," he said.

Urhoghide appealed to Buhari to sign into law the Federal Audit Bill, to give greater backing to the fight against corruption. "When the bill is passed into law, the auditor-general shall be vested with additional powers to inquire into, examine, investigate and report as he considers necessary on the expenditure of public monies and money advanced or granted to a private organisation or body in which the Federal Government has controlling interest," he said.

Previous Story
The Race for the Senate Presidency Heats Up
Next Story
APC, PDP Set to Clash Over National Assembly Leadership

The Race for the Senate Presidency Heats Up

Inside the Race for Nigeria's Senate President
Tagged:
Copyright © 2019 The Guardian. All rights reserved. Distributed by AllAfrica Global Media (allAfrica.com). To contact the copyright holder directly for corrections — or for permission to republish or make other authorized use of this material, click here.