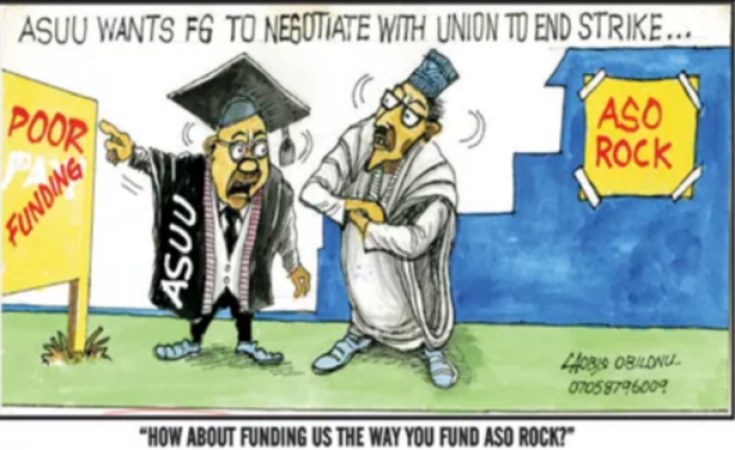 The Academic Staff Union of Universities (ASUU) has provided some information on its renewed negotiation with the federal government.

ASUU says the two parties returned to where they stopped their negotiation in May 2018.

Speaking with PREMIUM TIMES Wednesday night, the national president of ASUU, Biodun Ogunyemi, said the union hopes the process would not be truncated as it happened before.

"We resumed the suspended renegotiation of the 2009 with the federal government team today. We've started from where we stopped in May 2018. We hope the process would not be truncated as it happened before, " Mr Ogunyemi said.

For almost 10 years between 1999 and 2013, ASUU and the FG have been at loggerheads, but a moment of truce came when Wale Babalakin was appointed in 2017 to renegotiate an agreement reached between the two parties.

However, in August 2018, the academic staff union said they want Mr Babalakin, a senior lawyer and businessman, out of the negotiation.

Meanwhile, in the 19 years since Nigeria returned to civil rule under the Fourth Republic, university teachers in the country have embarked on strike 14 times that saw them stay away from work for about 40 months.

The most recent strike by the union began in November 2018 and ended in February 2019.

The demands of the union include

-Funding for the revitalisation of public universities based on the FGN-ASUU MoU of 2012, 2013 and the MoA of 2017

-Reconstitution of the current government team to allow for a leader and Chairman of the FG-ASUU Renegotiating team who has the interest of the nation and the people at heart.

- Release of the forensic audit report on Earned Academic allowances (EAA), offsetting the outstanding balance of the EAA and mainstreaming of same into the 2018 budget.

Highlights of the MoA that led to the suspension of the 2018 strike include:

1. In addition to the N20 billion for 2018, the sum of N25 billion only would be released in April/May 2019, after which government would resume full implementation of the MoU of 2013.

2. Part-payment of the outstanding arrears of the earned academic allowances; defraying the balance up to 2018 in 4 tranches within 36 months, and mainstreaming further payments of EAA into the annual budgets beginning from 2019 budget.

3. PICA verification and the release of the arrears of salary shortfall at the Federal University of Agriculture, Makurdi, not later than 15th February 2019.

4. Strengthening the Consultative Committee on State-owned Universities (CCSOU), inaugurated on Monday, 28th January 2019 to look into the issues of proliferation, underfunding and governance to consistently deliver on its mandate.

5. Payment of the outstanding EAA arrears of all eligible staff in the University of Ilorin, especially the loyal ASUU members whose appointments were illegally terminated by today, 7th February, 2019.

6. Visitation to all Federal Universities would commence tentatively by 11th March 2019.

7. Provision of documented guidelines on procedures and roles of parties in the process of renegotiating FGN-ASUU Agreement of 2009 which would commence not later than 18th February 2019 and end by Friday 29th March, 2019.

PREMIUM TIMES reported how the federal government and ASUU on Wednesday resumed talks on the 2009 agreement.

Mr Babalakin said both sides are determined to put an end to the lingering problems in the university system.

Nigeria's Academic Union Set For Another Strike
Tagged:
Copyright © 2019 Premium Times. All rights reserved. Distributed by AllAfrica Global Media (allAfrica.com). To contact the copyright holder directly for corrections — or for permission to republish or make other authorized use of this material, click here.